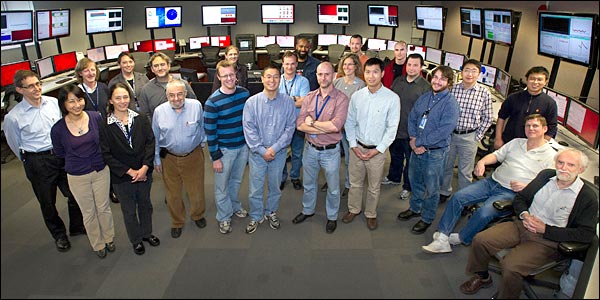 “Luminosity” is a measure of the number of particle collisions that a collider generates. To increase luminosity, or number of collisions, the colliding beams must contain more particles, be more densely packed, or collide more often.

RHIC was not only colliding polarized protons at two different energies, including the world’s highest at 510 billion electron volts (GeV), but also two new combinations of heavy ion collisions: uranium on uranium and copper on gold with new records in luminosity, polarization, and the time-in-store ratio.

Luminosity, polarization, and the time-in-store (see sidebar) are attributes that are among the most vital for successful experiments using colliding beams. Using these beams are the RHIC scientists who probe the mysteries of the strong force (one of the four natural forces that act on matter) and the quark-gluon plasma that existed at the dawn of the universe, as revealed in the detectors at RHIC.

Associate Laboratory Director for Nuclear & Particle Physics Steven Vigdor said, “Summarizing the entire 2012 run, RHIC is not only the sole operating collider facility in the U.S. at this point, but is also the most versatile collider ever operated. Its versatility will be one of the key arguments we make to ensure that RHIC funding remains healthy, even in a very tight budget climate going forward. The 2012 run will make a very strong case for this argument, as we’ve added new energies and new colliding beam species that bring new dimensions of control to our experiments studying early-universe matter. This run has seen a beautiful confluence of many efforts on R&D and improving machine and detector reliability over many years. It has met or exceeded all the goals of the experimental collaborations, and at the same time, provided sufficient time to carry out accelerator physics experiments that inform our plans for future improvements.” 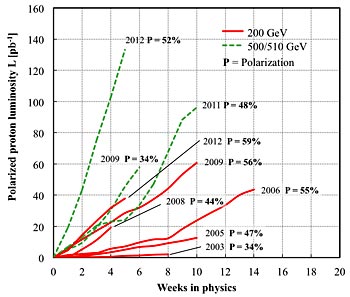 This year’s operation started with polarized protons slamming into each other with a total energy of 200 GeV. Said Thomas Roser, Collider-Accelerator Department chair, “The 200-GeV portion of the RHIC polarized proton Run 12 ended very successfully on March 12. The number of collision events was very close to the maximum we had projected, and the polarization was a little higher than in 2009, which was the last time that we ran at this energy. In addition, all the accelerator systems ran so reliably that the time-in-store ratio was at an all-time high.”

On March 12 the collision energy was changed to 510 GeV, the highest energy ever reached with polarized protons. It took only 3.5 days until going into physics mode, which is when experimentalists can take data.

Said Wolfram Fischer, who heads the Accelerator Division in the Collider-Accelerator Department, “Last year we faced a number of unusual failures and the many improvements we put in place did not result in the performance we wanted to see — we did not quite reach our goals at 500 GeV. This year we had to prove ourselves.”

Fischer continued, “Vincent Schoefer, the Run Coordinator, and the whole team really did an outstanding job.”

Schoefer explained, “This year we are seeing the results of all the development efforts of last year’s polarized proton run. We have developed many new tools that allow for fast start-up and efficient development, and we have taken full advantage of them.”

“RHIC is not only the sole operating collider facility in the U.S. at this point, but is also the most versatile collider ever operated.”
— Steven Vigdor, Associate Laboratory Director for Nuclear & Particle Physics at BNL

“Not only did the RHIC collider perform exceptionally well this year, but the STAR detector also performed very well, with record values for the detector uptime and efficiency for sampling the luminosity delivered by RHIC,” said Bill Christie, the STAR operations coordinator. “The combination of the record luminosity delivered by RHIC, and the high operational efficiency for the STAR detector allowed us to exceed our physics data goals by about 40 percent for the 200 GeV proton-proton run, and by a factor of two for the 510 GeV proton-proton run.”

“Our next task will be to prepare for next year, when we plan to commission a new polarized proton source and the electron lenses,” said Schoefer. “Both devices will allow for higher beam intensity and therefore higher luminosity.”

Because the experimentalists at RHIC’s two detectors, STAR and PHENIX, obtained enough polarized proton data quickly, the data-taking period could be shorter than planned. In addition, the Lab was granted a significant rebate on the electric power bill, and this saved enough time and funds to allow two more particle combinations to follow before the collider takes its summer break. Neither of these combinations of particle collisions — uranium on uranium, and copper on gold — ever ran before in a collider.

After this successful 510 GeV polarized proton run, Yun Luo of C-AD took over as Run Coordinator on April 19 for another world first. Two uranium beams were collided — the first time that uranium ions have been used in a collider. Because uranium nuclei are so heavy, that is, they contain so many nucleons (protons and neutrons), and have a football-like shape, they can create a denser quark-gluon plasma than any other species. This gives the experimenters a new tool.

The uranium beams are only now available because a new Electron Beam Ion Source (EBIS) was commissioned. 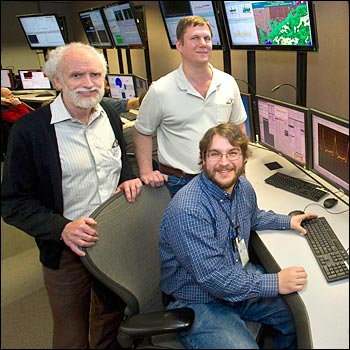 In addition, during the uranium run, full three-dimensional stochastic cooling was implemented for the first time. This sophisticated technique shrinks the colliding beams, resulting in a collision rate that progressively increases. This too is a world first for colliders like RHIC — thanks to the work of Mike Brennan, Kevin Mernick and their team, and the theoretical work of Mike Blaskiewicz. Stochastic cooling combined with a special RHIC configuration developed by Luo prevents the loss of any uranium particles stored in the beam until they collide with the uranium particles in the other beam.

Said Luo, “We are running the ultimate collider — we are only ‘losing’ particles in collisions.”

“The unique collision geometries that we get for the first time ever with uranium on uranium collisions allow us to perform a careful systematic study of a signature observed in gold on gold collisions interpreted as being related to parity violation,” explained Christie. “We wouldn’t have been able to reach our goal for this important data set if not for the success of the RHIC stochastic cooling system.”

Said Roser, “In addition, because we finished the polarized proton part of Run 12 early and we had the electric power rebate, three more weeks of running time could be fitted in than was initially planned. This is for copper-on-gold collisions, also a combination that has never run in a collider. With each new type of collision, we can further explore the mysterious world of the strong force and the quark-gluon plasma.”