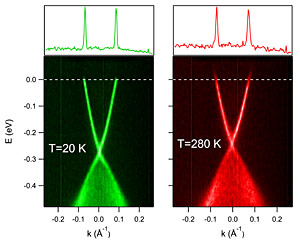 Free-flowing surface electrons: These images show the electronic structure at the surface of a topological insulator (Bi2Se3) at two different temperatures, 20 kelvin (-253° Celsius, green) and 280K (7°C, red). The two points near the top of each image, where the pattern crosses the E = 0 “Fermi level,” correspond to electrons at the Fermi surface moving in opposite directions. Earlier studies have shown that these electrons have opposite spins. Opposite spins make elastic backscattering interference impossible, which keeps electrons flowing freely at low temperatures. An increase in a different kind of scattering, resulting from vibrations of the lattice, was expected with increasing temperature. But as these images show, the states at the Fermi level (the peaks in the accompanying graphs) are almost equally sharp at 280 K as at 20 K, indicating that scattering on lattice vibrations is also strongly suppressed and that electrons can flow freely even at ambient temperatures. Suppression of these two types of scattering at the surface could possibly point the way to new materials with improved electrical conductivity.

In the search for new materials with improved electrical conductivity, scientists at the U.S. Department of Energy’s Brookhaven National Laboratory have found what appears to be a promising candidate — at least on the surface. New experiments show that electrons on the surface of this so-called topological insulator are “protected” from two kinds of scattering that can potentially interfere with the flow of electric current, even at relatively “warm” room temperatures, where the flow of electricity was expected to break down.

“This protection from backscattering means these materials could potentially carry electrical currents across their surfaces without dissipation,” said Brookhaven physicist Tonica Valla, lead author on a paper describing the new findings published online May 7, 2012 in Physical Review Letters. “If the bulk material behaved as its name implies it should — that is, as an insulator — we’d be able to make very efficient room-temperature electronic devices with these materials.”

Unfortunately, due to problems with how the materials are synthesized, the bulk versions tend to be conductors of the traditional kind, where electrons lose a large portion of their energy through heat-producing interactions as they move through the structure.

“We’d like to eliminate the flow of electrons through the material’s interior, and get a better grasp on the unusual abilities of the surface electrons, to see if we can design new materials that take advantage of the exotic surface properties,” Valla said.

Scattering of electrons can limit a material’s electrical conductivity in two ways. At low temperatures, electrons scatter as they interact with imperfections in the crystalline structure. Previous studies have shown that surface electrons in the new class of materials called topological insulators are “protected” from this kind of scattering: When electrons hit an impurity, they don’t bounce back but run through it, so that there is no degradation of the electrical current.

The protection comes from a property called “spin,” which is an intrinsic property like a particle’s mass and charge. On the surface of a topological insulator, the electrons moving in one direction have the opposite spin from the electrons moving in the opposite direction. If they hit a defect, they cannot just bounce back, as that would require also flipping the spin to match the spin of the other electrons flowing in the opposite direction. Flipping the spin would require a change in the magnetic moment at the barrier; without a magnetic change, there’s no flip of spin, and a U-turn is forbidden.

This resistance to backscattering could potentially make these materials ideal candidates for electronic applications — except that at higher temperatures, where real-world devices would be used, scientists expected that increasing vibrations in the crystalline lattice (atoms vibrate as they warm up) would cause a different kind of electron scattering. Collisions between electrons and the lattice vibrations, known as phonons, would cause energy dissipation and losses in the conventional way, they thought.

But no one had studied these higher-temperature electronic interactions, until now.

Valla’s team used a technique called angle-resolved photoemission spectroscopy (ARPES) at Brookhaven’s National Synchrotron Light Source and at the Advanced Light Source at Lawrence Berkeley National Laboratory to directly measure electron scattering rates in a topological insulator at a range of temperatures. The method bombards the material with beams of light and analyzes the energy spectrum of electrons emitted from the sample.

These measurements revealed that electrons on the surface of topological insulators are also “protected” from scattering on lattice vibrations.

“Our experiments showed that collisions between electrons and lattice vibrations are extremely rare, and that the scattering rates are much smaller than in any other conventional material,” Valla said.

As a result, the surface electrons remain coherent, carrying current with very little energy loss — even at ambient temperatures.

“Now,” speculates Valla, “if only we can find a way to harness the behavior of these surface electrons and prevent the bulk material’s conventional (lousy) conductivity from overwhelming the exotic surface component. Until then, the applications will have to wait.”

This research was funded by the DOE Office of Science. The research was conducted in collaboration with Zhihui Pan of Brookhaven, Alexei Fedorov of the Advanced Light Source at Lawrence Berkeley National Laboratory, and Dillon Gardner, Young Lee, and Shaoyan Chu of the Massachusetts Institute of Technology.