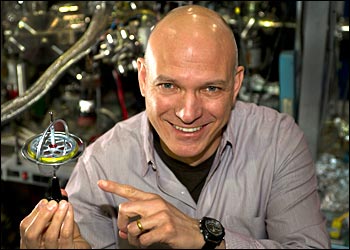 Magnets are essential components for industries and applications that include electricity generation and advanced electronics. Magnetic materials are found in the electricity-generating dynamos that provide power to computer hard drives where critical results from magnetic-resonance imaging (MRI) devices are stored. At BNL, researchers are exploring magnetic materials made of elements across the periodic table to understand more about how magnetic materials behave and how to improve their performance for applications to come.

On Thursday, May 24, join Darío Arena of the Photon Sciences Directorate for the 478th Brookhaven Lecture, titled “A New Spin on Magnets: Using X-Rays to Explore Novel Magnetic Materials.” All are invited to attend this free talk, which is open to the public and will be held in Berkner Hall at 4 p.m. Refreshments will be offered before and after the lecture. Visitors to the Lab 16 and older must carry a photo ID while on site.

To join Arena for dinner at a restaurant off site following the talk, contact Angela Bowden at Ext. 5169 or bowden@bnl.gov.

During his talk, Arena will explain the fundamentals of magnetic materials — including a concept called angular momentum, which can be illustrated by a balancing gyroscope — as well as researchers’ tools and techniques for investigating these materials at BNL’s National Synchrotron Light Source (NSLS). One method Arena will discuss includes using pulses of x-rays from the NSLS as a “strobe light” to examine the dynamics, or motion, of magnetism for different elements in complicated alloys and structures containing multiple layers. This approach allows researchers to resolve dynamics on the timescale of picoseconds, which are measured in trillionths of a second.

Arena earned a Ph.D. in physics from Rutgers, the State University of New Jersey, in 2000. He was a postdoc at Lawrence Livermore National Laboratory in California and a National Research Council Research Associate at the Naval Research Laboratory in Washington, D.C., before officially joining BNL’s NSLS as a postdoctoral research associate in 2003. At Brookhaven, he became an assistant physicist and spokesperson for the Magnetic Materials Characterization Beam Line at NSLS in 2006, associate physicist in 2008, and physicist in 2010.