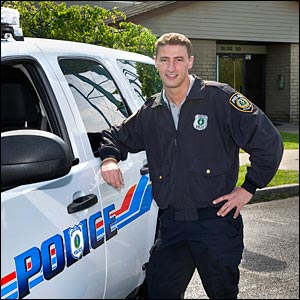 Every Lab employee is assigned a life number. These numbers are exactly what their name implies — a unique number issued to employees for life, used to identify individuals for benefits and training purposes. Life numbers are assigned chronologically and have been issued since the Lab’s inception. According to original logbooks, Philip Morse, the first Lab Director, holds life number 1, issued in 1946.

In March 2012, the records group in the Human Resources and Occupational Medicine Division (HR-OMC) assigned life number 25000 to new police recruit Devon Holmes of the Laboratory Protection Division. In 2008, Photon Sciences Directorate employee Michelle Scaduto was featured in a story on receiving life number 24000. “One thousand new hires since 2008 is representative of Brookhaven’s continued commitment to our science mission and development of our resources to achieve excellence,” said Robert Lincoln, chief human resources officer.

Holmes said that he showed up for his first day of work very excited about his new career. “My co-workers took notice of my life number almost immediately,” said Holmes. “I’m a pretty quiet guy so at first I was a little embarrassed by the fuss, but then I realized that this is pretty important marker in Lab history. Now I’m thinking this is truly my lucky number.”

Holmes recently returned from Afghanistan after serving in the United States Air Force Security Forces, so he is no stranger to rigorous training. “BNL Captain Dave Peter is an amazing trainer,” said Holmes. “He takes his job very seriously and has repeatedly reminded me how safety always comes first — safety of employees and visitors and protection of the site. Holmes commented that his supervisor, Lieutenant Robert Gerry, has also provided him with important leadership during his training period. “I fully complete my training in June, but I have already learned so much in the few shorts weeks since I arrived here,” added Holmes.

But, this new police recruit said he already has fond memories of the Lab. “My parents, Gary and Holly Olsen, work here, so as a kid I visited the pool and went to softball games,” he said. “I look forward to a new career and I plan to be here when the Lab issues life number 26000!”