Just How Does a Garden Grow? 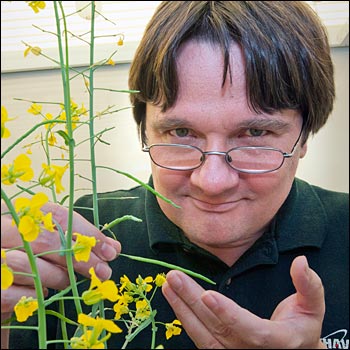 Biochemist Jörg Schwender uses advanced computational modeling to study plants’ metabolic networks —pathways of biochemical reactions where nutrients are converted into energy that plants use to survive and flourish.

Ask Jörg Schwender how a garden grows, and he won’t mention a thing about silver bells or cockle shells. Schwender is a biochemist at Brookhaven Lab, and he is developing computational models to study plants’ metabolic networks, the pathways of biochemical reactions where nutrients are converted into energy that plants need to survive and flourish. While Schwender is focused on exploring these metabolic networks, advances could be used to increase plant oil and biomass production for renewable biofuels, materials, and more.

Schwender grew up in Germany and now lives in Rocky Point. He joined the Biology Department at Brookhaven Lab in 2005.

Schwender will give the 479th Brookhaven Lecture on Wednesday, June 20, but before that, he explains his work here:

What basics do people need to know to understand what you do?

When you look at a map of the highway system, you see the pathways connect many different locations across the country. Some of these roadways have heavier traffic volume during rush hour and others on weekends. I study metabolic networks in plants, which are similar to highway networks. Instead of roadways and vehicles, however, I look at the pathways of biochemical reactions in plants. One of the major things that is happening along these pathways is that nutrients are converted into the energy that living organisms — including plants — need to sustain life, grow, maintain their structure, and respond to their environments.

What’s “cool” or interesting about your work?

I study metabolic networks in plants by systematically analyzing how hundreds of different enzymes and substrates in living organisms are organized, as well as how they interact and work together as a whole. Biological sciences have made great progress in detailing parts of these networks. The big challenge is to understand these interactions to be able to predict how the network behaves. I focus my research on the fundamental ways these systems behave, but new insights could be used to alter oil and biomass production for renewable biofuels and many plant-derived materials such as plastics, paints, and detergents.

What are you working on now?

My team and I are working with seed embryos to improve the mathematical models of metabolism so we can make more predictions that are more accurate. We typically work with rapeseed plants, which common canola cooking oil is derived from, but in recent years, we also started working on green alga and duckweed, which are aquatic green organisms that can grow very fast and have potential for biomass and oil production.

Why do this at BNL?

There are very good plant scientists and computational resources at Brookhaven, and both are instrumental for advancing this research.

Have your efforts contributed to any discoveries?

In the 1950s, scientists discovered a metabolic pathway for forming a class of substances called terpenoids. That pathway had long been assumed to be universal in all organisms. I discovered that while plants indeed have the “classical” terpenoid pathway, they generally use an entirely different pathway in parallel to produce many terpenoids, including pigments that make fruits and vegetables so colorful. This demonstrates how there still are important details about metabolic networks to uncover.

Who does your work benefit?

I would categorize my work mainly as basic research. While we also try to answer questions like how to increase oil production in plants, the methods and insights developed in the research deepen understanding on how things work in biological networks. I’m hoping that my work might again uncover some new mechanism or pathway.

Who do you work with?

I work with other plant scientists here at BNL — in particular, with John Shanklin and Changcheng Xu’s groups to establish and extend a focus on plant lipid research. I am also collaborating with Alistair Rogers of Brookhaven’s Environmental Sciences Department and four academic and industrial collaborators outside BNL in a Cooperative Research and Development Agreement. In this project, we compare cultivated rapeseed plant varieties that differ in seed oil content to determine where and when in the metabolic network specific enzymes can make a difference in oil content.

Who funds your work? And why are they interested in what you’re doing?

My group is funded by the Office of Basic Energy Sciences within the U.S. Department of Energy (DOE) Office of Science, as well as the DOE Office of Energy Efficiency and Renewable Energy. Industrial funding on rapeseed research is provided by BAYER Cropscience. BNL has also provided me with a grant through its Laboratory Directed Research and Development Program to analyze plant metabolism.

Have you won any awards? Which one are you most proud of?

I don’t know that these quite count as awards, but one publication written by my group was selected as “Paper of the Week” in the Journal of Biological Chemistry and two were selected as “featured articles” in The Plant Journal. In addition, it was fun to see our work featured on the covers of both journals.

Do you have any special talents?

Nothing too special — I like growing veggies in my garden and playing guitar.