On June 5, when the planet Venus crossed in front of the sun in a spectacular event that will not be seen again until 2117, two BNL employees who are also keen photographers, Phil Harrington and Rick Jackimowicz, captured the moments. Harrington took his photos from his backyard in Miller Place using a 4-inch (102mm) refracting telescope, and as a bonus, caught a magnificent rainbow just as the sun was setting. Jackimowicz took his photos from the National Synchrotron Light Source parking lot. The transit began at 6 p.m. but the view at BNL was obscured by clouds. Jackimowicz used a 600mm Nikon telephoto at 1200mm with Nikon DSLR. One that he took 45 minutes into the event shows many sun spots as well as Venus. 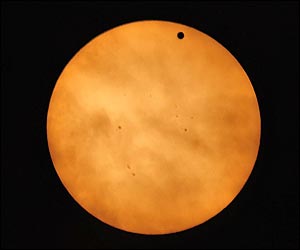 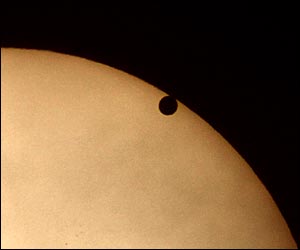 Transits of Venus occur in pairs, eight years apart. The last one was on June 8, 2004. But each succeeding pair of Venus transits is separated from the previous pair by more than a century. The next pair is expected on December 10–11, 2117, and in December 2125. Transits of Mercury occur much more often, says Harrington: The next one will take place on May 9, 2016.