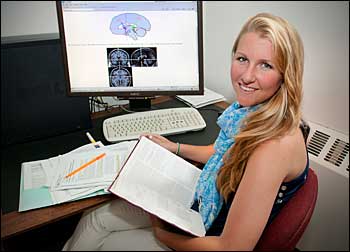 Amanda Pflumm can’t decide what she wants to do after she graduates.

“I’ve had a lot of different experiences in different areas of psychology. I think that’s the problem,” she says. “I like everything I’ve done so far!”

Pflumm’s current preoccupation is drug addiction, which she studies in her internship under neuroscientist Muhammad Parvaz at Brookhaven National Laboratory. Parvaz studies the impact of cocaine on the brain—or, more specifically, what happens to the brain after users give up the drug.

Scientists recruit participants from local rehabilitation centers right after they first give up cocaine. The participants undergo a variety of tests, including electroencephalograms (EEGs), structural and functional magnetic resonance imaging (MRIs), and pen-and-paper neuropsychological exams. They then return every six months to log their neurological progress.

By tracking several dozen former users, Parvaz has already found that brain function improves after just six cocaine-free months. Now he wants to see if there is any change in the volume of the participants’ gray matter, a major component of the brain that contains the bodies of nerve cells. Gray matter usually deceases in volume with age.

“If there is indeed a functional improvement so that their brains function better, is there a similar change in brain structure? If they are gaining brain function, their gray matter should increase,” Parvaz says. “That is what we want to find out.”

Pflumm is spending her summer poring over the structural MRI scans to see if there were any such changes. She uses voxel-based morphometry, a technique that breaks sections of the brain up into small and equal units, to analyze the scans.

“I really like it so far,” Pflumm says. “In another experience, maybe you’d be thrown into data analysis and expected to crunch numbers, but it’s not like that. Muhammad makes sure I know what’s going on in each step of the process.”

In the fall, Pflumm will take what she has learned at Brookhaven back to Washington & Jefferson College, where she studies psychology and neuroscience.