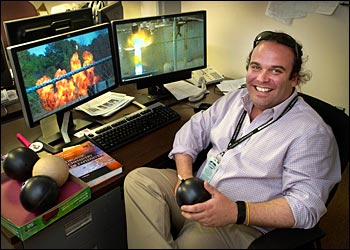 Like many young people, Joe Brady spent some of his early years weighing career options. He started college at George Washington University in Washington, D.C. intending to become a medical doctor, switched to chemistry, then spent seven years cooking in pubs and Italian and French restaurants in his native Rhode Island. He finally returned to school at the University of Rhode Island and earned Master’s and Ph.D. degrees in analytical chemistry, specializing in explosives.

Today, Brady’s job in the Nonproliferation and Homeland Security Field Support Group of BNL’s Nonproliferation and National Security Department includes studying methods to detect and defeat explosive devices, as well as training others in those methods. He has worked with the FBI and the Transportation Security Administration to train security guards from New York airports to recognize and deal with potential terrorist threats and he has organized workshops at Brookhaven to share knowledge and techniques.

“The research that we would like to do here at Brookhaven includes denaturing the precursors — examining additives that prevent the use of commercially available materials as explosives,” he said. “We can also work on the detectors — bad guys are always coming up with new stuff or old stuff that they’re revisiting — to make sure that the detectors can see it, and then the third part is to be able get rid of it gently. Is there a way that we can stabilize it and remove it without it blowing up?”

In training sessions, law enforcement personnel and other first responders get a firsthand look at various potentially explosive materials and can see how they differ from similar substances that are harmless.

Some of Brady’s work is in connection with the federal Securing the Cities (STC) program, which began in 2006 as a pilot project for the New York City region, providing equipment, tools and training through cooperative agreements to participating agencies. STC has provided many pieces of detection equipment, trained thousands of workers and conducted hundreds of drills. The program sends radiation monitoring equipment to Brookhaven for testing, repair and calibration. Brady and his colleagues, under group leader Carl Czajkowski, test and evaluate commercial as well as laboratory prototype radiation detectors with funding from the Department of Homeland Security.

At Brookhaven for just one year, Brady has found it an interesting place to be.

“Just about every day you meet someone doing something that’s completely new to you,” he said. “There are a lot of people here and they’re all doing pretty cool stuff.”

He’s also glad to have found his niche at a place near the water.

“Growing up in Rhode Island, I really love the ocean,” he said. “That’s my career goal — to stay by the ocean.’

“There are definitely synergies between cooking and chemistry,” he said. “You mix stuff together and you get something better than what you started with!”