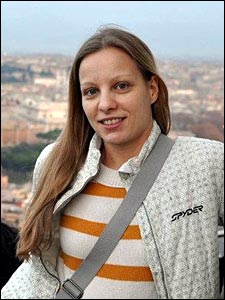 Marija Kotur, who recently received her Ph.D. from the Department of Physics and Astronomy at Stony Brook University (SBU), has been awarded the 2012 Gertrude Scharff-Goldhaber Prize. Currently funded by Brookhaven Science Associates, the company that manages BNL for DOE, the award was established in 1992 by Brookhaven Women in Science (BWIS), a nonprofit organization that supports and encourages the advancement of women in science.

The annual Gertrude Scharff-Goldhaber Prize recognizes substantial promise and accomplishment by a woman graduate student in physics. The prize honors the outstanding contributions of the late nuclear physicist Gertrude Scharff-Goldhaber. In 1950, she became the first woman Ph.D. appointed to BNL staff and later was a founding member of BWIS. The annual award is administered by BWIS and consists of a certificate and a check for $1,000.

Kotur earned a B.S. in theoretical and experimental physics at the University of Belgrade, Serbia, in 2005. Her prize-winning work, performed at SBU under the guidance of SBU Professor Thomas Weinacht, is in the area of strong-field ionization of polyatomic molecules. Strong-field ionization has been the focus of recent research efforts in ultrafast atomic, molecular and optical science, due to its role in the generation of attosecond pulses and as a probe of both nuclear and electronic dynamics, and in imaging molecular orbitals, which describe the wave-like behavior of an electron in a molecule.

Kotur has recently taken a postdoctoral position at Lund University in Sweden and has left the U.S. to pursue her research.