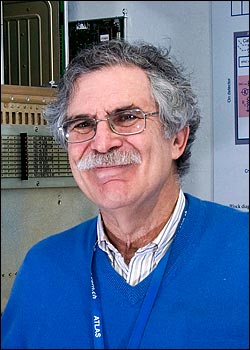 Brookhaven National Lab’s Howard Gordon, deputy operations program manager for the U.S. ATLAS collaboration at the Large Hadron Collider (LHC), recently received a nice surprise in his BNL mailbox: a letter from The White House. The letter, on behalf of the Obama Administration and signed by John Holdren, director of the Office of Science and Technology Policy, congratulated the collaboration for their recent “discovery of the Higgs boson,” the final piece of the Standard Model purported to give mass to other fundamental particles. (A similar letter was sent to the U.S. CMS Collaboration who announced similar results)

The discovery, the letter notes, “represents a triumph for fundamental science and paves the way for a deeper understanding of the universe.”

“While we need more data to be sure this is the Standard Model Higgs,” said Gordon, “the discovery represents an effective collaboration on a global scale where the U.S. made critical contributions. The plans at the LHC lead to opportunities for further discoveries in the coming decades.”

Scientists from Brookhaven and other U.S. institutions have played and continue to play a key role in the design, construction, and operation of the ATLAS experiment, and in data analysis and “triggering”—deciding which events to explore in detail to search for signs of the Higgs and other interesting physics.

The letter from The White House expressed great pride in these U.S. contributions: “Clearly, the scientific expertise and ingenuity of U.S. scientists have been essential components of the discovery. Furthermore, the astounding scientific achievement and the technological and educational benefits of your work demonstrate that our national investment in fundamental science has been well placed.” 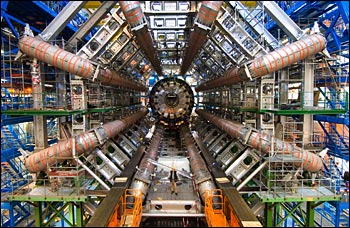 As many scientists have noted, the recent signs of a particle that is likely to be the Higgs from two experiments at the LHC, ATLAS and CMS, are not an endpoint of discovery, but rather the starting point for a detailed exploration of this particle’s properties and its implications for the larger structure of matter.

“The discovery of the Higgs boson has captured the imagination of the American public, and along with our fellow citizens, I look forward to your continued exploration of the submicroscopic universe,” Holdren concluded.

This news came in as many members of ATLAS and the other LHC experiments—as well as STAR and PHENIX, the two collaborations at the Relativistic Heavy Ion Collider (RHIC)—were gathered at Quark Matter 2012 in Washington, D.C., to discuss another area of physics: collisions of heavy ions that also explore the early universe with a connection to the origin of mass, at least for visible matter.