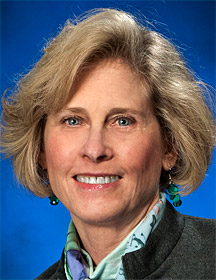 At Brookhaven, it’s not unusual to see a gathering of emergency vehicles and staff working their way through a simulated emergency operations exercise, practicing skills they might need one day.

Recently, a less-visible but equally perilous emergency — this time on an international scale — was simulated in a conference room in Bldg. 197, which houses the Nonproliferation and National Security Department (NNSD). A group of staff members and other participants and observers held a mock crisis meeting of the United States National Security Council (NSC) to respond to the disappearance of a team of inspectors from the International Atomic Energy Agency (IAEA). During the exercise, which covered two days of unfolding events in a period of two hours, NNSD Chair Carol Kessler played the role of the President of the United States, with various other staff members in other critical positions. The simulation was designed and directed as the final project of two BNL summer interns: Ian Andrews, a recent graduate of the University of Chicago, and Leon Ratz, who attends the John F. Kennedy School of Government at Harvard University.

“We were talking about some hypothetical scenarios where India and Pakistan or Iran and Israel might have a national security crisis,” Andrews explained. “As we considered the kind of scenarios that might unfold, we thought it would be interesting to have some people who were experienced in the field sit down and game it out. We asked if we could make this one of our deliverables and everyone really liked the idea.”

The interns had spent the summer learning about major nonproliferation issues, Kessler said, and were trying to find a different way to show what they had learned.

“They are clearly history buffs,” Kessler added, “and we’re coming up to the anniversary of the Cuban missile crisis. Leon is at the Kennedy school, where a Harvard professor wrote the seminal book on the Cuban missile crisis. The book traces three different decision paths that could have been taken and why they might have been taken. Two of them would have turned out much worse than what actually happened, pointing out how incredibly complex the problem is and how open-minded one needs to be in order to understand what the other country’s leaders are thinking — and how to shift their thinking if that’s what is needed to end the crisis.”

Andrews and Ratz designed a National Security Council meeting in which the President would confer with the Secretaries of State, Defense, Energy, and Treasury, as well as the national security advisors, the CIA director and the Chairman of the Joint Chiefs of Staff, all of whom would advise about how to handle losing contact with an IAEA inspection team in Iran. Under the scenario, the seven inspectors were from countries including China, Russia, and Italy, but not the U.S. Satellite photographs showed their cars approaching the facility they were to inspect before communication was cut off. Other cars were seen leaving the site, but the inspectors’ vehicles remained.

The interns devised the scenario over the course of a month, consulting with staff members about IAEA inspection protocol and with policy experts to determine the role the United States would play in the event of such a crisis.

“There’s a good deal of literature on Iran because its nuclear program is a pretty hot-button issue right now,” Andrews said. “By talking to the experts here and doing our own independent research, we were able to form a plausible scenario.”

They decided to compress the time span of the crisis, fitting the events of several days into a few hours.

“That was one of the more tricky aspects of the simulation,” Andrews said. “In an unfolding security crisis like that, as much as things are changing rapidly, there is only so much that can happen in an hour in terms of intelligence gathering or troop deployments or whatever may be taking place.”

The interns had a series of simulated documents — from press releases and statements from the IAEA to intelligence reports and analysis — and statements from the Iranian government. They plotted out when each of these documents would be released to the simulated National Security Council to keep the exercise moving at the right pace. Although the players assumed that the inspectors had found some evidence of weapons work, there were no Iranian demands until the very end of the exercise. The simulated Israeli president was consulted about what that government’s reaction might be.

A critical turning point in the simulation occurred when the Vice President, played by NNSD staff member Steve Musolino, pointed out that it was an international problem and should be taken to the United Nations Security Council for action. That advice triggered consultations with the UN representatives from China and Russia. And in a twist inspired by real events that occurred the weekend before the exercise, the Iranian demands were finally revealed to be release of inspectors in exchange for foreign aid to Iranian earthquake victims.

“It was so incredibly clever,” Kessler said. “They showed how you can go down one path that’s completely wrong because you don’t put together all the things that are going on, and of course nobody was thinking about the earthquake. So it was very, very well done.

“Not only did they do the research to figure out what was going on between the IAEA and Iran, they had devised detailed briefing information — statements by both sides, scenarios to bring in the State Department and Treasury, because there are sanctions against Iran, and the Energy Department, because they know about the nuclear facilities,” she said. “They wove in not only what was going on from a non-proliferation standpoint but what role each of the federal agencies would play. And the most important thing that they brought to it is that nonproliferation problems are sometimes actually national security issues where nonproliferation may be just an element of how this country is going to get what it wants from the international community.”

Kessler said the exercise was a learning experience for all who participated, including several other interns who had key roles on the simulated National Security Council. Other managerial staff members were able to experience firsthand the substance of the programs they manage. Kessler’s husband, retired from the State Department, played the Chairman of the Joint Chiefs of Staff.

“We could have kept going all day,” Kessler said. “It was very interesting and enjoyable.”

Participants from NNSD were so impressed they asked Andrews and Ratz to design a template for future exercises with different scenarios.

“The NSC meets about all sorts of things,” Andrews said. “They talk about what our nuclear weapons policy is going to be for the next 10 to 20 years, and about other crises that might unfold like this one. I think it’s an ideal way to learn about a lot of issues.”

While Ratz has returned to school in Boston, Andrews continues to work at BNL and plans to go to graduate school in computer science.