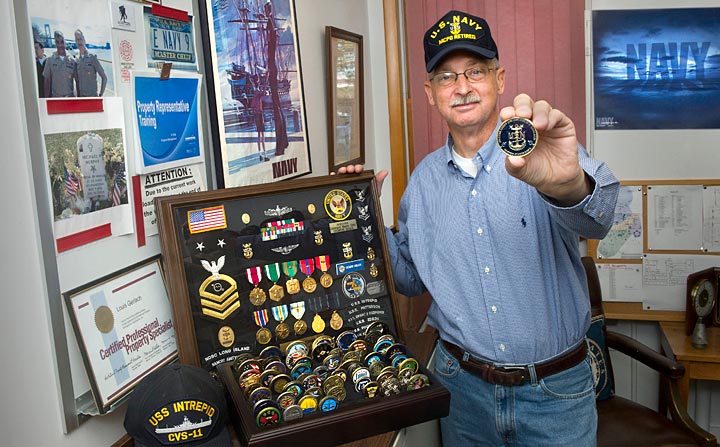 Louis Gerlach proudly displays his collection of military challenge coins, in particular the personal coin he designed for his upcoming retirement from the United States Navy.

In February, Gerlach will be honored for his 42 years of continuous service in the United States Navy at a ceremony to be held at the Farmingdale, NY Reserve Center. All are welcome to attend the ceremony. For additional information contact Louis Gerlach, Ext. 2910, gerlach@bnl.gov.

If you asked Louis Gerlach what he values most about his career, it would be hard for him to give just one answer. After all, he has had two simultaneous, important jobs — one at Brookhaven Lab and another in the United States Navy. “I think the best answer would be that I try to run a tight ship in both places,” said Gerlach with a smile. “My Navy training and my job at BNL have played important roles in every aspect of my life. They have complemented each other, and both have always been learning experiences that I respect and value.”

Gerlach, a property representative and research space manager in the Global and Regional Solutions Directorate (GARS), began his career at the Lab 34 years ago working on reactor safety programs. 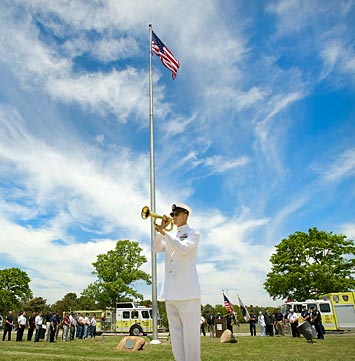 Together with BNLers Don Farnam, Mike Paquette, Pete Palamidis (retired), and John Passaro, Gerlach is also a founding member of the Brookhaven Veterans Association (BVA). He often serves as the bugler playing the well-known military tune known as “Taps.”

“I have been involved in many activities and Lab experiments,” said Gerlach. “Like the familiar slogan says, my work at BNL has always been an adventure.”

Gerlach first became interested in the sea when he joined the Naval Sea Cadet Corps at 10 years of age. At 17, immediately following his high school graduation, he enlisted and headed to “boot camp” in Great Lakes, Illinois. Based on his test scores, Gerlach was assigned to Radarman “A” school, and soon thereafter reported for duty onboard the USS Intrepid, CVS-11, now decommissioned. The renowned ship was an aircraft carrier that suffered many torpedo attacks during World War II, and Gerlach was a member of the decommissioning crew. The Intrepid currently houses the Intrepid Sea, Air, and Space Museum in New York City. 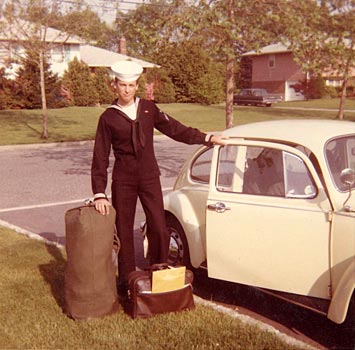 In this 1971 photo, a young Louis Gerlach heads to active duty aboard the Intrepid after some rest and relaxation at home.

During his first four years of active duty, Gerlach traveled to many European ports in countries including England, France, Italy, Greece, Scotland, and Norway. He has traveled above the Arctic Circle, where his job as a radarman kept him busy searching for and tracking enemy submarines and aircraft. That cruise earned him and his shipmates the Naval “Blue Nose Certificate.” He has spent time at sea on at least 13 different ships and proudly displays baseball caps with their logos on a shelf in his BNL office. But there is one baseball cap that does not sit on that shelf. It’s a cap Gerlach received as a gift from fellow BNLer and Navy man Joe Gadbois that boldly states “USN Retired.” Gerlach says he didn’t place that cap on his head until after October 10, 2012, when his military status officially changed.

Gerlach is quick to add that without the support of his wife Wendy and his family, his life would have certainly been different. “Sure, I was off doing good deeds and serving my country, but I missed many weekends with Wendy and my kids,” adds Gerlach. “Luckily, they understood how important my service to our country is to me, and they willingly stood by and encouraged me while I spent weekends at the reserve centers and training exercises.” 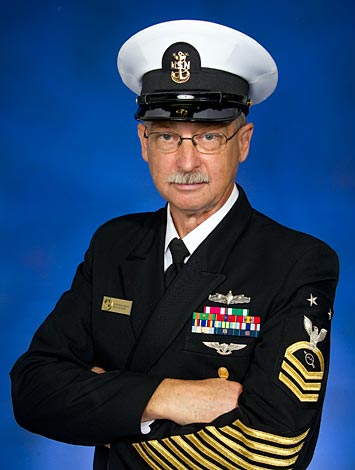 Louis Gerlach will wear his full-dress Navy uniform at his retirement ceremony on February 3, 2013. Gerlach will retire after 42 years of active military service.

“Every one of these medals tells a personal story and holds a poignant memory for me,” he said.

Gerlach also displays a large collection of military challenge coins. While gently selecting each coin from its display case, he seems sentimental and is proud to explain where each of them came from and how they ended up in his collection. For his upcoming retirement, Gerlach designed his own personal challenge coin that he will share with the special guests at his retirement ceremony. (Challenge coins are small medallions bearing an insignia. They are used in the military to acknowledge outstanding service, to build morale, and commemorate events.)

“Looking back, I have had a charmed life,” said Gerlach. “Experiencing the world and sharing true camaraderie with my fellow military friends is something I will always cherish. I wouldn’t change one minute of my life, but now it’s time to move on to the next phase. I will surely miss my shipmates at the reserve centers, but I will have the opportunity to spend more time with my wife, kids, and grandkids. I am really looking forward to that.”

But, don’t worry. Gerlach vows to remain active. He will continue to volunteer in the honor guard at Calverton National Cemetery. And, just in case he isn’t busy enough, he will continue to be an active member of the Kings Park Fire Department, as he has been for the past 27 years.

Ahoy, Master Chief! May you have fair winds and following seas!