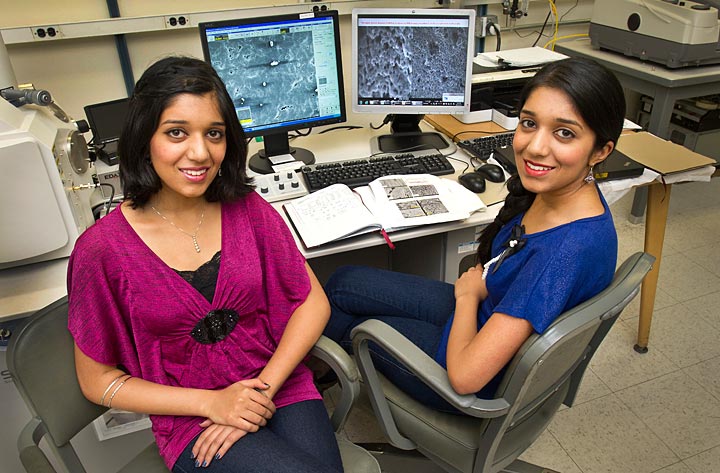 On Friday, October 19, two young scientists, sisters Shweta and Shilpa Iyer, were investigating new methods to generate what just may be the sustainable fuel of the future: pure hydrogen. The abundant and power-packed element tends to stay locked up tight within larger compounds, and distillation can be difficult. One of its most common carriers is water, H20, and the Iyers work to efficiently pry free those hydrogen atoms with a technique called water splitting. The sisters, who conduct their research at Brookhaven National Laboratory, were auditioning custom catalytic compounds that, if successful, could help spark a hydrogen economy.

Meanwhile, their father Srinivasan Iyer, who works at a nearby Lab building, received an exciting call from his wife. The breaking news concerned Shweta and Shilpa, but the young researchers’ cell phones failed to get reception in the chemistry lab where experimental catalysts broke water into bits. Phone in hand, Srinivasan ran across campus to find his daughters and share the good news. As soon as he arrived, the sisters ran out of the building shedding tears of surprise and joy.

Shweta and Shilpa Iyer, high school students and twin sisters from Port Jefferson Station, had just won regional finalist honors in the Siemens Competition in Math, Science & Technology, one of the country’s most prestigious contests for high school research. The 16-year-old sisters each won $1,000, and will now advance in the competition for a chance to win scholarships worth up to $100,000. Shweta and Shilpa now join six other Long Island students and a total of 93 regional finalists across the country.

“We were overwhelmed, of course,” Shilpa said. “We never expected to make it this far, and it’s just so exciting to get this kind of honor.”

Shilpa has always wanted to pursue a career in the sciences, either in research or in management to facilitate breakthrough research, and the experience at Brookhaven Lab only served to bolster that commitment. Shweta, however, only considered a career in science after doing hands-on work at the Lab that actively addressed the nation’s growing energy needs.

“Actually working on real problems in a real lab changed my perception,” Shweta said. “It’s exciting to see how this research could impact the future of energy.” 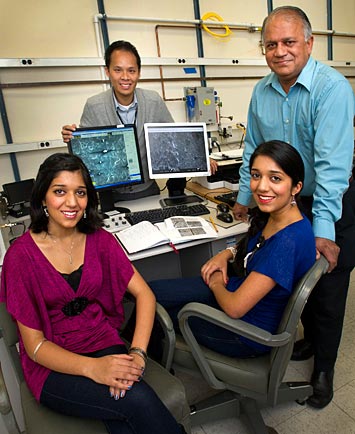 In the foreground, students Shweta (left) and Shilpa Iyer sit at a scanning electron microscope workstation. Research associate and advisor Wei-Fu Chen stands in the back (left), joined by the sisters’ father, Srinivasan Iyer, who works in Brookhaven Lab’s Information Technology Department.

In Brookhaven Lab’s Chemistry Department, researchers work on ways to improve electrolysis, the process of splitting of water into hydrogen and oxygen with electricity. By optimizing the reaction with customized catalysts, researchers can advance the possibility of an economy built on renewable hydrogen fuel. Research associate Wei-Fu Chen works as the sisters’ advisor and mentor, and he managed to teach them more than just the ins and outs of cutting-edge catalysis.

“We had this stereotype of the scientist as this out-of-shape old man with oversized glasses, sitting hunched over a messy desk,” Shilpa said. “But Wei-Fu is really cool. He’s not at all what we expected.”

Wei-Fu worked with Shilpa and Shweta to develop new water-splitting catalysts that combine reactive metals with biomass materials pulled from common plants. The efficacy of these newly synthesized bio-metal hybrids surprised Wei-Fu and the girls, and the results themselves will be detailed in forthcoming scientific papers and patents.

“I’ve learned a lot from these two,” Wei-Fu said. “They ask the kinds of inventive and original questions that we don’t usually get from trained chemists. Shweta and Shilpa challenge me to think in different ways, and I’m really thankful for that.”

The twins’ father, Srinivasan, is a systems architect in Brookhaven Lab’s Information Technology Division. He encouraged his daughters to explore science, but never pushed them down that career path. He did help arrange for this mentorship program with Wei-Fu, but only after Shweta and Shilpa expressed interest in energy research.

“I could not be more proud,” Srinivasan said. “They are exceptional girls. I’m grateful that they have this opportunity to come to Brookhaven and work with Wei-Fu on such important research.”

The sisters, seniors at Comsewogue High School, are now preparing to present their research against other regional finalists at Carnegie Mellon University in Pittsburgh, PA on the weekend of November 16. The winners of that competition will advance to the national finals at George Washington University in Washington, DC, the first weekend in December.

“We’ve learned so much from Wei-Fu and this experience,” Shweta said. “It is an honor to come this far and to be involved with this innovative technology.”