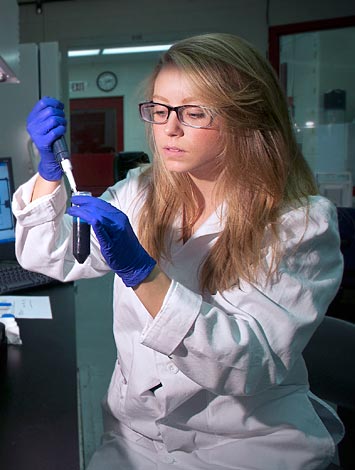 When Stefanie Lasota finished her junior year as a biology major at St. John’s University in 2011, she was still undecided about her plans after graduation. Her aunt, Sharon Zuhoski, who works in the Environmental Sciences Department at Brookhaven Lab, suggested she speak with plant physiologist Alistair Rogers, knowing that his climate change research fell in line with her niece’s interests. Now, nearly a year and half later, that suggestion, and Lasota’s impassioned dedication to her research, is responsible for her transition from college student to one of the youngest fulltime researchers onsite.

As soon as she learned of Rogers’ work, which focuses on rising carbon dioxide (CO2) levels and their long-term effects on plants and ecosystems, Lasota knew that she wanted to get involved. “Environmental science and climate change is a really pressing issue right now, so I wanted to do something that would impact the future,” she said.

Lasota applied to the Office of Educational Program’s Science Undergraduate Laboratory Internship (SULI) program, and was accepted and placed with Rogers’ team during the summer of 2011. Alongside Rogers, three other researchers, and a fellow SULI intern, Lasota became involved in an ongoing study—a Free-Air Carbon dioxide Enrichment (FACE) project at Duke University. That experiment, which began in 1994, was designed, built, and operated by Brookhaven scientists and engineers.

Lasota’s focus was analyzing thousands of plant samples for levels of carbon (C) and nitrogen (N) to test the theory that the predicted positive growth response of trees to rising carbon dioxide levels would become limited by the availability of nitrogen. Lasota’s measurements of C and N content helped the scientists decipher whether or not there was evidence of progressive nitrogen limitation in loblolly pines exposed to elevated CO2. 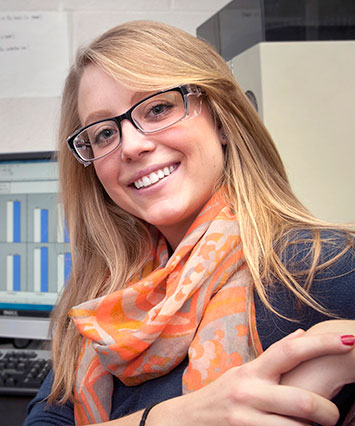 “In the 15 years of DukeFACE, where these trees were being grown under elevated CO2 concentrations, we didn’t find any evidence of progressive nitrogen limitation,” said Lasota, who stayed onboard with Rogers’ team as a part-time employee following her summer in the SULI program. The study found that the extra C assimilated at elevated CO2 concentration was being matched by greater N acquisition. Together with other findings, these data suggested that loblolly pine forests should be able to respond positively to rising CO2 without developing a nitrogen limitation.

This was good news because CO2 absorbed by the loblolly pines helps reduce the amount of CO2 in the atmosphere, slowing down global climate change.

When it came time for Lasota to graduate from St. John’s in May of this year, she learned of a fulltime position opening in Rogers’ lab and applied immediately. She officially joined the staff as a biology associate in September of this year.

Her work, along with Rogers’, has transitioned to a new, multidisciplinary study with a widespread group of collaborators called Next Generation Ecosystem Experiments–Arctic (NGEE-Arctic). The NGEE-Arctic experiment is focused on Arctic ecosystems due to the pivotal role they play in determining the rate of future global change. As thawing of the permafrost occurs, huge reserves of organic frozen carbon have the potential to dramatically increase the input of CO2 to the atmosphere.

Rogers visited Alaska over the summer and Lasota has just begun analysis of the plant samples he brought back. This research aims to improve process level understanding and model representation of some of the critical ecosystem functions that take place on the Arctic tundra with the ultimate goal of increasing our confidence in climate projections for high-latitude regions of the world.

In April, Lasota will spend a week in Nebraska on a training course, learning to use the project’s primary data collecting tool, a portable gas exchange system that scientists can attach to plants to measure photosynthesis. With that training under belt, Lasota hopes to join Rogers next summer in Alaska.