Keeping Tabs on Chemicals in the Air 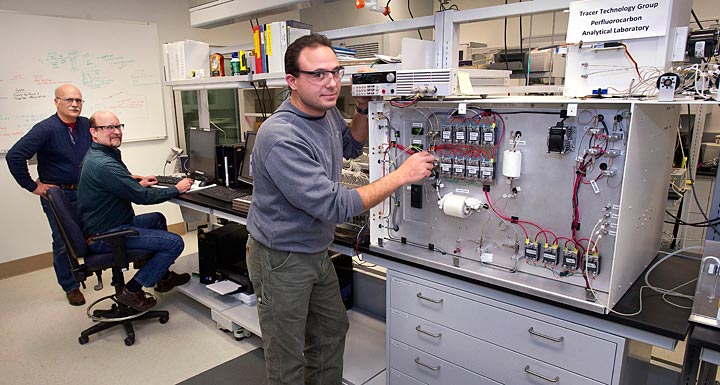 How do pollutants move through different kinds of environments? How far would toxic chemicals released in a terror attack travel? These are the kinds of questions that have motivated “atmospheric dispersion studies” of the Tracer Technology Group (TTG) within Brookhaven’s Environmental Sciences Department for more than 30 years.

The Technology Development and Applications (TDA) group within Environmental Sciences recently designed and built new programmable air samplers with expanded capabilities, and the TTG acquired new analytical tools that are now installed in a state-of-the-art laboratory.

“Since the early 1980s, we have become world leaders in the use of harmless perfluorocarbon tracers (PFTs) for solving diverse research and engineering problems in the atmospheric sciences, for national security and emergency response, in the energy production and utility industries, and in building characterization,” said Environmental Research and Technology division head Paul Kalb. “These new tools will greatly improve the flexibility, accuracy, and reliability of our samples and the sensitivity and precision of our results.”

The tools and techniques developed by the team enable them to detect minute quantities of these tracer chemicals—with limits at the femtogram level, or a quadrillionth of a gram— over regions measuring mere meters to hundreds of kilometers. Data from these studies are used to

The new programmable sampler system designed by TDA group leader John Heiser and his staff is based on the Brookhaven Atmospheric Tracer Sampler (BATS) system developed at the Lab more than 30 years ago. 100 of the new, state-of-the-art tools, dubbed BATS II, are now ready for their first deployment in a large urban dispersion study.

The compact BATS II devices now include WiFi, GPS, flow rate monitoring, on-the-fly flow control, data logging, and low power electronics and peripherals. This newest version uses a single board computer and is capable of taking air samples at pre-programmed dates and times, varying flow rates, and varying sample intervals from seconds to hours and more. Each sampler can accommodate up to 24 capillary adsorption tubes (CATS) optimized for PFT sampling.

This flexibility allows samples to be taken more frequently at the start of a study period, with reduced frequency over time as tracers decay and concentrations diminish. The result is a better understanding of the rise and decay rates of tracer concentrations and the ability to extend overall monitoring periods.

WiFi enables changes in programming after deployment—for example, to adapt to unexpected weather conditions, rather than postponing a study—without having to remove samplers from difficult-to-reach locations (e.g., high on rooftops). WiFi also allows rapid and reliable programming prior to testing and easy checking in the field. GPS marks deployment location, and also serves for time synchronization, allowing all samplers to be precisely activated simultaneously (within less than half a second). 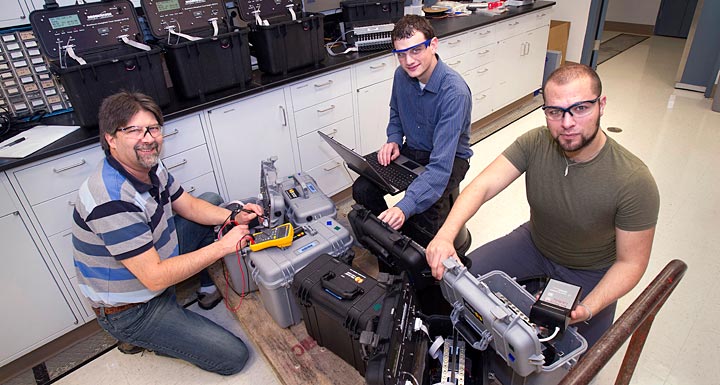 When samples collected in the field return to the lab, new analytical tools await their arrival.

“We have recently added a third gas chromatograph with electron capture detection for analysis of PFT samples, and a gas chromatograph with a thermal conductivity detector to analyze pure PFTs used in the preparation of standards and in releases in field programs,” said TTG group leader Tom Watson. “We therefore now have four highly-modified, dedicated gas chromatographic analytical systems in a brand new state-of-the art laboratory.”

The new electron-capture system is built around a LabView control system that provides real-time monitoring of instrument conditions for quality control. The controlling program also has automated systems that will stop the analysis process to prevent loss of samples if conditions are outside of optimal operating parameters.

The new laboratory also has a state-of-the-art gas distribution system to improve the efficiency of day-to-day operations and prevent analysis errors.

“With these equipment and infrastructure upgrades, Brookhaven Lab continues to set the standard for tracer gas applications that can help solve current and future environmental, energy, and national security challenges,” concluded Kalb.