One of Fermilab's major future projects, the Long-Baseline Neutrino Experiment, achieved a significant milestone this week.

The neutrino beam for the proposed LBNE experiment would travel through 800 miles of earth to a far detector in Lead, S.D.

The U.S. Department of Energy on Monday granted Critical Decision 1 approval to the first phase of LBNE, which includes construction of a beamline at Fermilab and a near-surface far detector at the Sanford Lab in Lead, S.D. One of the largest proposed neutrino experiments in the world, LBNE will send neutrinos generated at Fermilab through 800 miles of earth to the South Dakota detector.

CD-1 is the second stage of approval in the DOE process, and according to Project Director Jim Strait, it covers the overall scale of the cost and schedule of the construction.

"This is a significant step, and we're extremely happy to get it," Strait said. "It's a green light for the proposed cost and schedule of LBNE's first phase."

Plans for LBNE underwent three different reviews in the past two months before reaching the desk of William Brinkman, director of the Office of Science, who made the final decision to grant CD-1 approval.

Following those reviews, Strait, Project Manager Elaine McCluskey and the LBNE team worked with Pepin Carolan, project manager in the DOE site office at Fermilab, to create an iron-clad case for approval. It was Carolan who successfully presented that case to Brinkman on Monday.

"Achieving CD-1 is a tremendous milestone for LBNE," Carolan said. "It's a testimony to the dedication and perseverance of the entire LBNE project team, the collaboration and the partner labs." 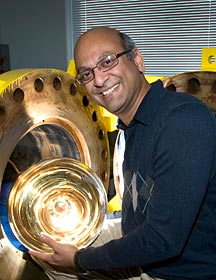 For Brookhaven National Laboratory's Milind Diwan, one of two spokespeople for the LBNE collaboration (the other is UC Davis' Bob Svoboda), Monday's approval is an important milestone after more than a decade of work.

"It's a very good day for everyone," Diwan said. "We are all very happy that the U.S. has committed to a fundamental research program of a scope appropriate for our country."

Diwan said CD-1 approval will also attract new collaborators from other countries. This approval shows the determination of the Department of Energy to carry out this important experiment and will increase the trust that is needed for foreign partners to invest in U.S. facilities, Diwan said.

"We need an exciting project so our friends from abroad will be willing to join with us on great science," Diwan said. "This level of commitment is very important and makes us more attractive as partners."

The next planned milestone for the project will be initial construction for the beamline at Fermilab, slated to begin in 2015. CD-2 approval, the next stage of the DOE process, is expected in spring of 2016. The experiment is scheduled to begin taking data in 2023.