Ask a scientist what they do for a living and sometimes you’ll get a mouthful of jargon and very little understanding of what he or she actually studies.

That’s where the “Ten Hundred Words of Science” challenge comes in. Inspired by internet comic artist Randall Munroe, who recently used only the 1,000 most common words in the English language to describe the Saturn V rocket, scientists from every field are now experimenting with this limited word list to explain their own work.

The result of Munroe’s attempt to parse impenetrable scientific terminology into everyday language is the web comic panel “The Up-Goer Five.” In this annotated blueprint, he describes each piece of the complex rocket that took American astronauts to the moon, eliminating complicated technical terms in favor of explanations everyone can understand.

Detail from the "Up-Goer Five" schematic.

Munroe calls the helium tanks on the Saturn V Rocket “things holding that kind of air that makes your voice funny” and makes the complicated pieces of machinery comprehensible by describing their function. In Munroe’s hands, the Launch Escape System becomes the “thing to help people escape really fast if there’s a problem and everything is on fire so they decide not to go to space.”

The “Up-Goer Five” is not only a funny and enlightening comic, but it served as a commentary on the difficult-to-understand nature of most scientific communication. Its publication inspired geneticist Theo Sanderson to build a web-based text editor – The Up-Goer Five Text Editor – which restricts writers to those 1,000 most commonly used words. Scientists around the world are using the text editor to explain their work, then posting on Twitter with the hashtag #upgoer5 or submitting to a Tumblr blog called Ten Hundred Words of Science.

The text editor isn’t a translator, though, so it takes some creativity to find words that get accurate scientific ideas across with only the most basic vocabulary. Several Brookhaven scientists have already tried their hands at explaining the science done at the Lab with the “ten hundred” most common words. 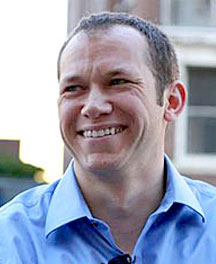 Alistair Rogers, a biologist in Brookhaven’s Environmental Sciences Department, studies the long-term effects of elevated concentrations of carbon dioxide on plants in the field, and their physiological, biochemical and molecular adaptations to global change. His work is easy to understand in this excerpt from his Ten Hundred Words submission: 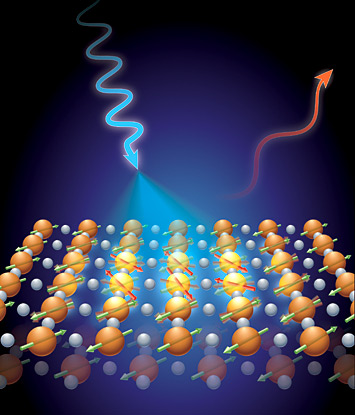 In this rendering of physicist Mark Dean's research, an x-ray probe (blue) hits a superconductor, which emits light back with information on the spin of electrons. In Ten-Hundred-Words speak, when the blue 'bits of light' change color into red light, we can tell more about how the electrons in superconductors move. 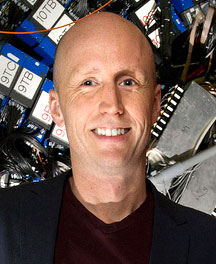 “What we really like to do is make big groups of these small things and make them as hot as we can. Really hot. More than ten hundred hundred times hotter than the sun. We do this by slamming four hundred up, up, down, and up, down, down things together all at the same time. When we do this, they all become very hot and new small matter and not-matter things are made out of this thick hot stuff. The new small things are the same number of matter and not-matter. Light comes out of the thick hot stuff too and we can tell how hot the stuff is from the color of the light.

As difficult as it is to pare down complex scientific studies into basic explanations, Sorenson said that while the task seemed “daunting” at first, using the Up-Goer Five Text Editor to describe his work wasn’t as difficult as he’d first thought.

“I was able to name five out of six quarks because physicists adopted fairly simple words to label the quarks and their different charges,” he said. “It almost became easier to talk about my work this way because I didn’t have to explain what more obscure words mean. It was liberating and fun.”

It wasn’t without its challenges, though. Dean points out that some studies show that even three-year-olds have a vocabulary of more than 1000 words, and lamented not being able to use simple terms like “metal” or “magnet”. Sorenson also found the limited vocabulary tough to work around. “I did find it hard to live without the word ‘electron’,” he says.

Scientists throughout the Lab are encouraged to describe their work the Up-Goer Five Text Editor. To submit a description of scientific work at Brookhaven for the Ten Hundred Words project, contact Chelsea Whyte, cwhyte@bnl.gov, in the Media & Communications Office.