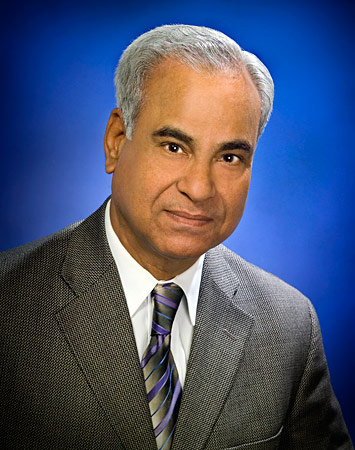 Suresh Srivastava, a longtime researcher at Brookhaven Lab and pioneer in developing personalized medicine, is the new president-elect of the World Association of Radiopharmaceutical Molecular Therapy (WARMTH)

Suresh Srivastava is a longtime researcher at Brookhaven Lab and pioneer in developing personalized medicine—customized, low-dose methods to fight cancer and other life-threatening diseases. While he is still a senior medical scientist in the Lab's Collider-Accelerator Department, Srivastava took on an additional role in January as the new president-elect of the World Association of Radiopharmaceutical Molecular Therapy (WARMTH).

WARMTH is an international organization with 400 members that include nuclear medicine physicians, radiochemists, physicists and oncologists from more than 50 countries. Srivastava helped cofound the organization in 2002 as a subsidiary of the World Federation of Nuclear Medicine and Biology, and in 2008, the organization became an independent entity. Today, WARMTH members work to advance science and education relating to therapeutic nuclear medicine and radiopharmaceutical therapy for the benefit of public health around the world.

"I am quite honored that I was elected by the members of WARMTH to represent our international collaboration at this important time," said Srivastava. "Radiopharmaceutical therapy is one of the fastest growing branches of nuclear medicine and work at Brookhaven has been integral in conceiving and developing its practice."

Srivastava and his collaborators produce potentially life-saving radioisotopes at the Brookhaven Linac Isotope Producer (BLIP) for a fraction of the usual cost, because the essential protons are accelerated through a portion of the Relativistic Heavy Ion Collider (RHIC) accelerator complex

At Brookhaven, new WARMTH president-elect Srivastava heads the Medical Isotope Research and Production Program. There, he and his collaborators use the Brookhaven Linac Isotope Producer (BLIP) to create certain radioisotopes not available commercially for the nuclear medicine community and industry for treatments and research.

Researchers at BLIP produce radioisotopes for groundbreaking nuclear medicine research by bombarding specific materials with protons that are accelerated through the 200-million-electron-volt (MeV) linear accelerator, or "linac," portion of the Relativistic Heavy Ion Collider (RHIC) accelerator complex. RHIC is a 2.4-mile-round collider that scientists use to learn more about how the physical world works, from the smallest subatomic particles to the largest stars. It is the only remaining particle collider in the United States, with outlined research goals that continue into the 2020s.

"By piggybacking on ongoing operations at RHIC, we can continue to produce these potentially life-saving medical isotopes at BLIP for a fraction of the cost," explained Srivastava.

"Another advantage of operating BLIP at Brookhaven is that experts in nuclear medicine, biology, chemistry and accelerator science may be only a hallway away—fostering the collaborations that drive scientific breakthroughs to benefit the world," Srivastava added.

Srivastava earned a Ph.D. in inorganic and analytical chemistry from the University of Allahabad, India, in 1961. His achievements and honors include the 1986 Industrial Research-100 (now called the R&D 100) award, which recognizes the 100 most significant new technologies of the year; the Federal Laboratory Consortium Award in 1988; the Special Recognition Award of the Chilean Society of Biology and Nuclear Medicine in 1989; the BNL Distinguished Research & Development Award in 1995; the Radiopharmaceutical Sciences Council Distinguished Service Award in 1999; the Indo-American Society of Nuclear Medicine Lifetime Achievement Award in 1999; and the 2003 Battelle Distinguished Inventor Award. He has published more than 220 refereed journal articles, 360 abstracts, 26 book chapters, and many seminal review articles. He is the inventor or co-inventor of 29 patented and three statutory inventions. He received lifetime achievement awards from India's Society of Nuclear Medicine in 2012 and the International Society of Radiopharmaceutical Sciences in Italy in 2010. At the same time, he was honored with the University of Padova's Gold Medal in recognition of his continued role in the advancement of basic sciences in nuclear medicine.

Srivastava's research has been funded in the past primarily by the U.S. Department of Energy (DOE) Office of Science's Biological and Environmental Research, the DOE Office of Nuclear Energy, and DOE National Nuclear Security Administration Global Initiatives for Proliferation Prevention program. More recently, Srivastava has been funded by the DOE Office of Nuclear Physics, and in part, by a number of industrial sponsors.