Sound, Light Sources and the Thrill of Glimpsing the Future 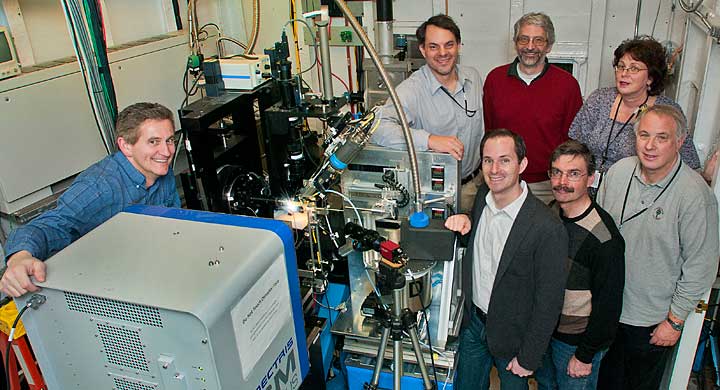 Scientific research is a process fraught with fits and starts, dead-ends, dashed dreams, unexpected turns, and the occasional exhilarating insight. As scientists, many of us continue along our career path in part because of those rare moments of joy felt when contributing to the frontiers of science. We experienced one of those rare moments this past January at the National Synchrotron Light Source (NSLS) X25 beamline, when we successfully tested a new method to collect data from protein crystals—by using sound waves to eject the crystals through the air into an X-ray beam.

For decades now, preparing microscopic protein crystals to collect data was done typically by hand with a microscope, and lassoing a crystal out of its liquid environment required great skill. After that was done, the sample would be transported from the lab to a beamline end station and then mechanically transferred into the X-ray beam, where we collected data to determine the atomic structure of complex macromolecules.

In contrast, this new method—called acoustic droplet ejection (ADE)—employs pulsed sound waves to eject crystals encased in a droplet from their source into the X-ray beam. This can be done with great precision, at high speeds, and without touching the crystals at all. We theorized that this was in fact possible back in 2008, but we were overcome with joy when, last month, we observed the first X-ray diffraction pattern from crystals with our new, automated ADE method.

ADE in Action at Brookhaven Lab, and Beyond

We tested our ADE system at the X25 beamline by depositing slurries of protein crystals—whose diameters are measured in millionths of a meter—onto a sheet of X-ray transparent plastic. With these protein crystals affixed to the plastic, we were able to confirm that the quality of data from the X-ray diffraction process was not compromised at all compared to traditional approaches.

Our ADE system enables us to mount a sample and record X-ray diffraction patterns every few seconds. This is significantly faster than the current methods that require several minutes per sample. When necessary, this ADE method is powerful enough to deliver hundreds of crystal-containing droplets every second.

Commercial ADE systems are available for drug discovery and genomics pipelines, and are large, boxy objects about half the size of a refrigerator. The system we constructed is much smaller and modular, making it the first ADE instrument that can work within the tight space constraints of most beamlines at a synchrotron. We anticipate that these methods will be vital for scientists at modern facilities such as the future National Synchrotron Light Source II (NSLS-II) and the existing Linac Coherent Light Source (LCLS) at SLAC National Accelerator Laboratory.

At a proposed beamline at NSLS-II, an X-ray beam focused to one micrometer will destroy protein crystals in about 50 milliseconds, requiring very fast sample delivery and data collection. The problem intensifies at the LCLS, where individual sub-micrometer-sized crystals are imaged with X-rays pulsed at 70 quadrillionths of a second before the crystals are vaporized. The bottom line is that a lot of precious X-rays are lost without more efficient ways to deliver samples.

It's too early to test the ADE system at NSLS-II, but at the LCLS, our ADE-based injector will deliver microcrystals more than one hundred times per second, in synchrony with the facility's X-ray pulse structure. Our ultimate goal is to minimize the amount of sample needed by using drop-on-demand ADE methods, making sure that each droplet is hit by an X-ray pulse.

In addition to our collaborators at Brookhaven, we have expanded our team to continue experiments beyond the X25 beamline at NSLS. The larger group now includes staff members at the LCLS, Stanford Synchrotron Radiation Light Source, Lawrence Berkeley National Laboratory, and Labcyte Inc. This expanded group will provide critical expertise when we deploy our acoustic sample delivery methods at the LCLS in June 2013.

Look, no hands! A pulsed sound wave ejects a droplet containing the microcrystal sample. The sample becomes affixed to an X-ray transparent sheet of plastic, positioned in the path of the X-ray beamline to determine the atomic structure of complex macromolecules. This hands-free technique is significantly faster than current methods.

Not Alone on the Frontier

The excitement we felt at beamline X25 was a glimpse of the future, and a harbinger of change. Our achievement would not be possible without support from Brookhaven's Laboratory Directed Research and Development (LDRD) program, which promotes highly innovative and exploratory research. It was a team effort, involving BNL researchers Christian Roessler, Anthony Kuczewski, and Annie Héroux, as well as additional scientists, engineers, technicians, and support staff from the Photon Sciences and Environmental, Biological & Computational Sciences Directorates. All of these people helped, and continue to help us reach our goal of developing ADE technology for widespread use—and expanding the frontiers of science.

We thank our funders, including the U.S. Department of Energy Office of Science's Biological and Environmental Research and Basic Energy Sciences, as well as the National Institutes of Health and its National Center for Research Resources and National Institute of General Medical Sciences.