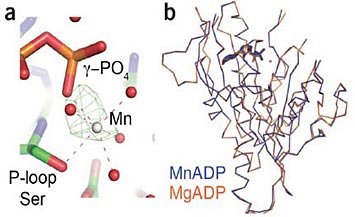 Molecular motor proteins inside the body, called kinesins, are a lot like the motor in your car. The molecular motors convert stored chemical energy into specific conformational changes, which lead to various movements in cells, analogous to the way a car engine converts the energy of gasoline combustion into torque generation, which leads to tires rotating on an axle.

In your car, you turn a key in the ignition to start and stop this process, but it's not quite that simple with kinesins. Until now. Researchers from Dartmouth College discovered a "switch" to control the activity of these organic nanomotors.

"Now we have the ability to tightly control the speed of these motors, such that we can 'turn them off' and 'turn them back on' similar to a dimmer switch on your lights at home," said Jared Cochran, who worked with a team to devise the control "switch" for kinesin motors. They found that in the presence of magnesium, the engineered enzyme stops functioning. But introduce manganese, and it will jumpstart the motor protein again.

Cochran's postdoctoral advisor, F. Jon Kull, an associate professor of chemistry at Dartmouth, adds that they can also adjust the speed of the catalysis by varying the ratio of magnesium to manganese. "We can turn it on and we can turn it off, but we can also turn it on more slowly."

Using the National Synchrotron Light Source (NSLS) at Brookhaven National Laboratory, they solved the structure of a kinesin motor domain, and showed that manganese binding was similar to magnesium binding in the proteins.

"Because molecular motors are much, much smaller than our car engine, they need to be studied using sophisticated structural and biophysical methodologies, hence the use of the NSLS X6A beamline at Brookhaven National Laboratory for X-ray diffraction studies," Cochran said.

He added, "The 3D structure we produced allows us to understand where almost every atom in the protein is positioned relative to the bound nucleotide and metal, which provides insight into how the motor works."

The team engineered a specific cysteine substitution for different kinesins to render them able to use manganese instead of magnesium, which then allowed for modulation of activity in the motor proteins with the introduction of one or the other metal. "One can simply vary the ratio of magnesium and manganese ions, which in turn can modulate the target enzyme activity from inactive to wild-type levels," Cochran said.

Their cutting-edge research sprang from an idea sparked by decades-old research. Kull said, "A collaborator in Dartmouth's Department of Chemistry, Dean Wilcox, mentioned research done years ago to study ribozymes that used a similar method, which inspired the team to try it with proteins."

"We looked up a paper that had been done years ago that no one had thought about," Kull said. "It shows how you never know when basic research is going to come in handy. It might be 20 years later, but in this case, an idea from an old experiment was able to be applied to a new system."

The metal "switch" is a valuable tool that can help researchers studying energy conversion in enzymes. This method also allows researchers to study sub steps of the kinetic cycle, stopping the reaction at particular steps in the cycle, which can be tricky to isolate.

Since this work was completed, Cochran has started his own lab at Indiana University, where his senior-level post-doc and graduate student are conducting the next set of experiments to extend this research.