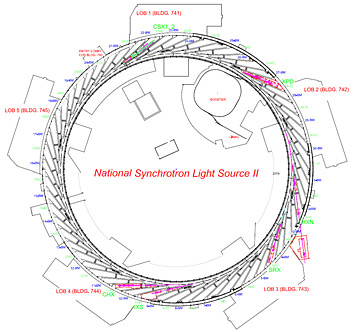 Seven beamlines and their hutches have defined locations on the NSLS-II experimental floor. Acronyms for the beamlines – CSX1 and CSX2, XPD, HXN, SRX, IXS and CHX – are colored green. The hutches are outlined in red around the beamline components in magenta. HXN has a satellite hutch exterior to the ring building. The drawing is oriented with north at the top, and the lobby is the rectangle jutting beyond the outer perimeter of the ring to the left of LOB1 (first lab-office building). Drawing by Brian Mullany and Kelly Roy, both senior designers in the Accelerator Division.

In an April 2012 celebration, hundreds of walkers circled the NSLS-II ring building soon after Brookhaven Lab took official occupancy of the fifth and final wedge of space. Back then, they had the entire width of the experimental floor in which to enjoy their half-mile jaunt. Today, the path around is circuitous, as walkers now would have to wend their way around hutches – a good sign of continued construction progress.

NSLS-II will produce x-rays 10,000 times brighter than NSLS. To keep people safe from intense x-rays in the new facility, the hutches will enclose particular sections of beamlines.

Under a contract to build 17 complete hutches for an initial set of beamlines, Global Partners in Shielding (GPS) started shipping hutch pieces to NSLS-II in the spring of 2012. The balance of the year saw hutch assembly on the experimental floor – a tantalizing promise of beamlines to come.

GPS is manufacturing two types of hutches: steel-encapsulated lead enclosures and all-steel enclosures. Photon Sciences project engineer Ed Haas, who is the technical point of contact with the company, explained that lead is a better shield than steel for the highest-energy, or hard, x-rays, but the lead must be encapsulated by sheet metal to prevent personnel from coming into contact with the lead. The steel also gives the hutches greater load-carrying capacity. Lead/steel hutches will be used in specific locations around the ring where more shielding is required.

The 17 hutches are assigned to seven beamlines

When fully operational, NSLS-II will have up to 60 main beamlines, many of which will also have branch beamlines. Each main and branch beamline is built for a specific type of scientific research.

Through the year, Haas has journeyed to GPS in New Jersey every few months to check their work. "They are always very open and welcoming, and I commend them for putting considerable effort into tests and in-process manufacturing improvements," he noted.

Haas said that the visits, coupled with tests performed by GPS, have yielded improvements. For example, welding techniques were changed to ensure that no degradation in lead shielding materials was occurring inside welded lead/steel sandwich panels. Also, checks for warping were instituted to make sure that all panel-to-panel joints would be radiation tight. When minor buckling was detected in roof panels, cement board was used to replace internal stiffeners, eliminating the problem.

Lead contamination was also a concern until GPS instituted additional procedures to make sure that lead particles – which often originated in crates from their lead supplier – were not inside any deliveries to the Lab. GPS has also cleaned their existing work areas in the ring building. Said Haas, "NSLS-II environment, safety and health specialists continue to test for lead contamination, and recent results have been within acceptable limits."

He added that the company's biggest effort overall has been "trying to maintain high-quality workmanship on schedule while keeping all beamline staff members happy."

Haas himself has sent a steady stream of progress reports to Mary Carlucci-Dayton, beamline engineering group leader in the Photon Division, copying about 30 others. These emails constitute a day-to-day accounting of the planning and work involved in installing this first set of hutches. With many more to come, the experience will pay off.