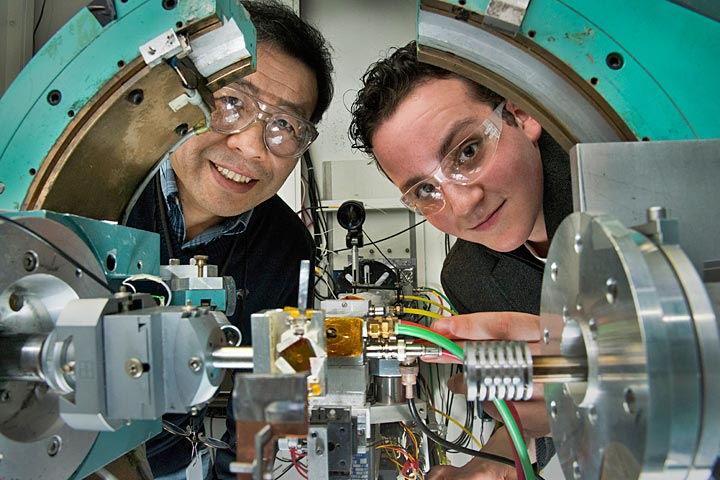 The challenge to discover sources of sustainable energy is one that many brilliant minds have taken on, requiring contributions from a variety of disciplines—and from a new generation of young scientists. Syosset High School senior Jacob Weiser hopes to count himself among them, and his recent work at Brookhaven National Laboratory gives him a solid head start: Using a sophisticated method of x-ray analysis at the National Synchrotron Light Source (NSLS), he and Brookhaven physicist Jianming Bai have observed and analyzed the crystallization process of a potential cathode material for use in next-generation lithium-ion batteries.

"Jake was very motivated to do the research, he was already interested in x-ray diffraction, and he's a quick learner," said Bai, who was paired with Weiser through Brookhaven's High School Research Program (HSRP). The two researchers also collaborated with the Energy Storage Group in the Sustainable Energy Technologies Department.

At NSLS, researchers including Weiser, Bai, and physicist Feng Wang used a beam of x-rays to study the whole reaction process in synthesis of copper vanadium oxide, a material that could be used for high-capacity cathodes in Li-ion batteries. This cutting-edge technique, called synchrotron powder x-ray diffraction, is often used when researchers want to analyze a material without damaging it. By focusing an x-ray beam at the material being investigated, the specimen remains intact. Based on the diffraction patterns produced as x-rays scatter off the specimen, researchers can construct a detailed image of the specimen's atomic structure over a period of time. This method allowed the researchers to watch the copper vanadium oxide crystal as it "grew" in real time and monitor how reaction conditions—time, temperature, pressure, and other variables—affected this crystallization process.

The results of this analysis revealed important structural properties of the copper vanadium oxide unit cell, which led researchers to believe that it could be suitable for use in next-generation batteries. However, current production methods of this material are expensive and not environmentally friendly. An understanding of the crystallization process may help engineers design better manufacturing practices for these inexpensive and energy-efficient battery electrodes, which could be used to power everything from cell phones to vehicles.

"I've always been drawn to energy research, and I was excited to get to work at a synchrotron—it's a fascinating piece of machinery," said Weiser. "It was an unbelievable feeling to see something interesting in the data that was an unexpected result. That's what I love about science. There's always the possibility that you might make a breakthrough."

Next month, Weiser will travel to Houston for the final round of competition, where he'll compete against young scientists from more than 60 countries for the $1500 grand prize. This summer, he will return to Brookhaven to resume his research with Bai at NSLS, and this fall, he'll attend Cornell University, where he hopes to continue to study photon science.

His mentors at Brookhaven look forward to monitoring his success at the science fair and beyond.

"The high school research program is very important, and not just for the summer the students are here," said Ron Pindak, Associate Division Director in the Photon Division at Brookhaven, who oversaw Weiser and Bai's research. "It's fun to bring in the kind of enthusiasm we see in Jake, and to track his career. It's a win-win situation."

It's been a good year for visiting high school students working with mentors at the Lab. In addition to Weiser's finalist placing at I-SWEEEP, students have won or placed at science fairs including the Intel International Science and Engineering Fair; the Siemens Competition for Math, Science, and Technology; and the Intel Science Talent Search.

"The success of these students is a reflection of their dedication and the commitment of the Lab's scientists," said Scott Bronson, K-12 program manager of Brookhaven's Office of Educational Programs, which brings in dozens of high school students to conduct research each year. "Because of the generosity of the scientific staff, we're able to expose them to the highest level of science and inspire a future generation of scientists."

This collaborative research was supported by the U.S. Department Of Energy (DOE) office of Energy Efficiency and Renewable Energy under the Batteries for Advanced Transportation Technologies (BATT) Program.