'Why Has Earth NOT Warmed as Much as Expected? And Why Is This So Important?' 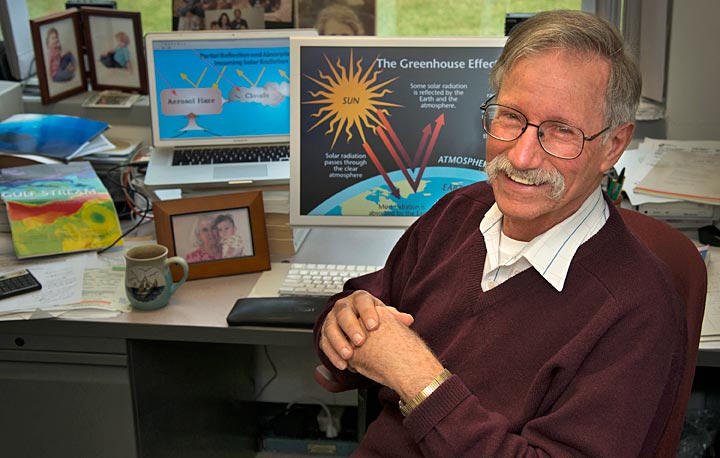 In the last 200 years, the amount of carbon dioxide in the atmosphere has increased by 40 percent—a result mainly of a world energy economy powered by fossil fuels. Carbon dioxide is a "greenhouse gas" that accumulates in Earth's atmosphere, absorbs infrared radiation emitted from Earth's surface, and directs some of the absorbed energy back to the surface and atmosphere. According to current estimates of Earth's climate sensitivity, that 40 percent increase of carbon dioxide together with increases in other greenhouse gases would, in the absence of other influences, cause the average global temperature to rise 2.7 to 6.1 degrees Fahrenheit. Measurements, however, show an increase of only 1.4 degrees.

What could cause such a discrepancy? And what are the implications?

On Wednesday, May 15, join Stephen Schwartz of the Environmental Sciences Department for the 487th Brookhaven Lecture, titled "Why Has Earth NOT Warmed as Much as Expected? And Why Is This So Important?" All are invited to attend this free talk, which is open to the public and will be held in Berkner Hall at 4 p.m. Refreshments will be offered before and after the lecture. Visitors to the Lab 16 and older must carry a photo ID while on site.

To join Schwartz for dinner at a restaurant off site on Thursday, May 16, contact Nancy Barci (Ext. 7548).

Schwartz will begin his talk with an introduction to Earth's climate system. He will then speak about his research on why Earth's temperature has not increased as much as expected from the observed increase in greenhouse gases. He will also discuss what this might mean for the future.

Schwartz earned a bachelor's degree in chemistry from Harvard College in 1963 and a Ph.D. in physical chemistry from the University of California, Berkeley in 1968. He was a Fulbright postdoctoral fellow and Ramsay memorial fellow at the University of Cambridge in England from 1968 to 1969, and an assistant professor at Stony Brook University from 1969 to 1975. Schwartz arrived at Brookhaven Lab's Department of Applied Science as an associate scientist in 1975. He held the rank of scientist from 1977 to 1990 and became a senior scientist in 1990. Schwartz has been awarded fellowships in the American Association for the Advancement of Science and the American Geophysical Union and served as chief scientist of the U.S. Department of Energy's Atmospheric Science Program from 2004 to 2009.