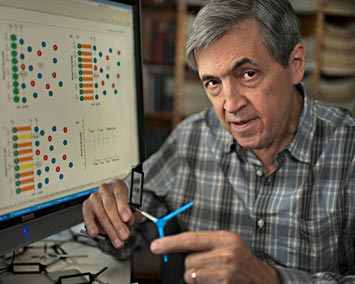 It’s not every day that someone is part of a group that includes U.S. Secretary of Energy Ernest Moniz, filmmaker Ken Burns, actor Sally Field, and musician Herbie Hancock, but Marshall Newton of Brookhaven Lab’s Chemistry Department was on Oct. 12. During a ceremony held in Cambridge, Mass., Newton, Moniz, Burns, Field, and Hancock were among a total 164 influential artists, scientists, scholars, authors, and institutional leaders inducted into the American Academy of Arts and Sciences.

The American Academy of Arts and Sciences is a 233-year-old society and independent policy research center that draws on its members’ expertise to conduct studies in science and technology policy, global security, the humanities and culture, social policy, and education. John Adams, John Hancock, and other scholar-patriots are among the academy’s founders. Among the Academy's Fellows are more than 250 Nobel laureates and 60 Pulitzer Prize winners.

“The American Academy of Arts and Sciences has an interesting mix of influential people and I’m impressed by its support for science in a broad social context—I’m delighted to be admitted,” Newton said.

Newton earned a Ph.D. in physical chemistry from Harvard University and joined Brookhaven Lab’s Chemistry Department in 1969. He has authored or coauthored 179 scientific papers in his ongoing career. 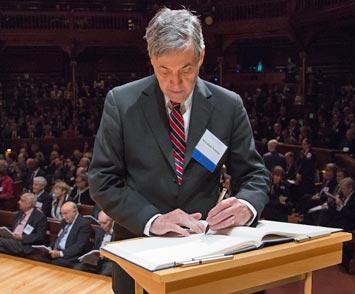 During the ceremony on Oct. 12, Brookhaven Lab's Marshall Newton signed the American Academy of Arts and Sciences' Book of Members—a tradition that dates back to 1780.

Newton’s citation from the academy states that he is a leading figure in the general area of theoretical interpretation of electron transfer. For decades, Newton has focused his attention on formulating theoretical models to determine how electronic charge and energy are transferred over long distances. Whether completed with pencil and paper or massive computing power, Newton calculates how electronic communication is established between distant molecular sites. This, for example, occurs during photosynthesis—the process in which plants convert light into usable chemical energy. Newton’s research has been an important component for the U.S. Department of Energy’s (DOE) solar photochemistry program to develop solar energy as a viable component of the nation’s energy supply.

Although Newton retired from Brookhaven in 2008, he was granted emeritus status in 2012 and he continues his research today. In addition, he still referees for journals and sits on review committees for the Department of Energy.

“Brookhaven and the Department of Energy have been ideal places for me because both institutions have supported my fundamental research, which helps in the effort to advance basic energy sciences and national energy policy,” Newton said. “My activities haven’t changed much since retiring, so this is a good example of active retirement.”