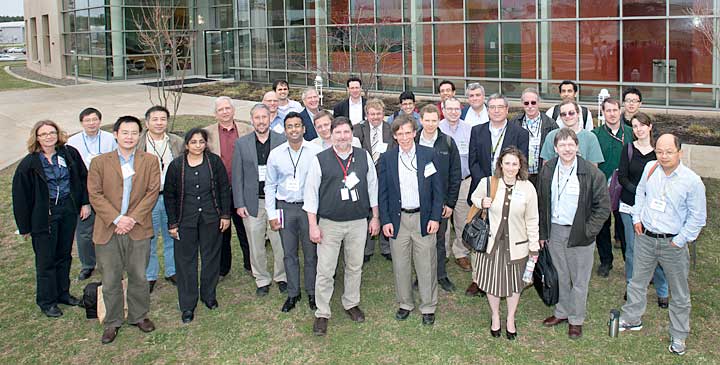 In April, Brookhaven Lab hosted a two-day workshop bringing together Lab researchers and members of the U.S. Photovoltaic Manufacturing Consortium (PVMC) to discuss new approaches for advancing solar manufacturing in the U.S. PVMC is a partnership between The College of Nanoscale Science and Engineering at the University of Albany and Semiconductor Manufacturing Technology or SEMATECH, an association of member companies cooperating on research in key areas of semiconductor technology, with a strong focus on thin-film photovoltaic (PV) manufacturing.

The U.S. Department of Energy (DOE) has selected and funded PVMC to develop high-throughput manufacturing of thin-film photovoltaics. A key motivation for establishing PVMC is that the solar manufacturing industry in the United States needs to develop domestic, low-cost, high-volume PV manufacturing to remain competitive in the global solar marketplace.

"Thin-film PV materials are being developed and already commercialized at some levels, but not at high enough volume to penetrate the global market in a substantial way," Looney said.  "One of the barriers is that we don't yet have a high-volume manufacturing focus in the United States. We need to develop standardized manufacturing tools and a better statistical process control to help drive down the cost of manufacturing. "

New York State has made significant investments in PVMC, including the donation of pilot assembly lines for thin film manufacturing. Brookhaven will contribute its capabilities in materials science and engineering science to this effort.

"We bring to the table a depth in science, especially in materials characterization, and our unique facilities like the National Synchrotron Light Source (NSLS), NSLS-II, the Center for Functional Nanomaterials and the solar test array," Looney said.  "The laboratory capabilities we have developed will enable us to study recently manufactured cells in detail in terms of their performance and uniformity, identify processes that are limiting performance, and tie those back to manufacturing conditions. The workshop brought PVMC and BNL together to start to explore opportunities and identify areas where we should make concerted efforts in support of PVMC's mission."

Looney said that participants have identified a number of potential projects and are now forming working groups to try and flesh out what those projects would really look like.

"There's a number of 'low-hanging fruit'-type projects, things we can get started on right away in more of a collaborative nature," Looney said, "There's also some higher-hanging fruit — which is harder to get to and would require significant funding — that I think would result in substantial contributions toward PVMC's long term mission."

The first day of the workshop featured a series of focused discussions and presentations on Brookhaven capabilities. Presenters described the Lab's capabilities at the NSLS and at CFN, along with other capabilities being developed in the Sustainable Energy Technologies Department.  PVMC speakers gave an overview of the consortium's goals and capabilities, and presented a metrology road map being developed by the group.  Following the technical presentations, participants broke out into discussion sessions where they began to grapple with what the projects will look like, what kinds of capabilities are needed and who should lead the efforts. The second day featured tours of CFN, NSLS, the Interdisciplinary Science Building and the Long Island Solar Farm.