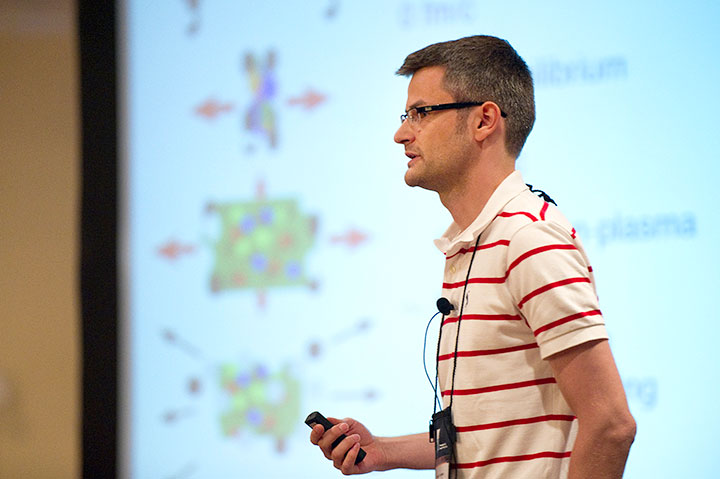 Bjoern Schenke, a Goldhaber Fellow in the nuclear theory group at the U.S. Department of Energy's Brookhaven National Laboratory, has been awarded a Young Scientist Prize in nuclear physics by the International Union of Pure and Applied Physics (IUPAP). IUPAP is a pre-eminent global organization aimed at stimulating and facilitating international cooperation in physics and the worldwide development of science. The organization's Young Scientist Prize was initiated in 2007 "to recognize and encourage very promising experimental or theoretical research in nuclear physics, including the advancement of a method, a procedure, a technique, or a device that contributes in a significant way to nuclear physics research."

Schenke received his prize—which consists of 1,000 Euros, a medal, and a certificate citing his contributions—at the International Nuclear Physics Conference in Florence, Italy, on June 5.

"I am very honored to receive this award for my contributions to the very exciting field of heavy-ion physics. This recognition from the nuclear physics community is further motivation to continue and expand my research to help our understanding of the properties of fundamental matter," Schenke said.

This recognition from the nuclear physics community is further motivation to continue and expand my research to help our understanding of the properties of fundamental matter.

Schenke's research focuses on developing models and theories to accurately represent experimental nuclear physics results, including those from particle collisions at the Relativistic Heavy Ion Collider (RHIC)—the "atom smasher" at Brookhaven Lab—and at the European Large Hadron Collider. His theories and models will help physicists understand the interactions of fundamental particles known as quarks and gluons, which last existed as independent entities at the very dawn of the universe and make up 99 percent of the visible mass of the universe today.

One of Schenke's recent successes is a model that accurately describes patterns of particles flowing out from these collisions and how those patterns depend on the initial shape of the colliding ions and the temperatures created on impact. The results reveal that the "quark-gluon plasma"—the hot soup of subatomic quarks and gluons momentarily liberated from the ions as they collide—flows more freely due to lower viscosity created at RHIC than in the LHC's higher-temperature heavy-ion smashups.

"This award is a great honor for Bjoern, and certainly reflects well on the importance of Brookhaven's nuclear theory program," said Thomas Ludlam, chair of Brookhaven's Physics Department. "The work of Bjoern and his colleagues allows us to quantitatively measure the extraordinary properties of the 'perfect liquid' state of matter that exists for fleeting instants in high energy collisions at RHIC and the LHC."

"This is the second time that a member of the Brookhaven Physics Department has won this prize, the first being Lijuan Ruan in 2010," said Berndt Mueller, Associate Laboratory Director for Nuclear and Particle Physics. In addition, two other previous winners had connections with the department: Kenji Fukushima in 2010 and Rainer Fries in 2007; both were RIKEN-BNL Fellows.

"This award is given only every three years to three recipients each time, so Brookhaven Lab has completely swept the prize since its inception!" Mueller said.

Schenke earned a B.S. from Justus Liebig University, Giessen, Germany, in 2001, conducted graduate research as part of an award Fellowship at the University of Washington, Seattle, 2002-2003, and earned an M.S. and Ph.D., in 2004 and 2008, respectively, from Goethe University in Frankfurt, Germany. After conducting postdoctoral research as part of a Fellowship at McGill University, he joined Brookhaven Lab as a Research Associate in 2010, and became a Goldhaber Distinguished Fellow in 2012. He has given several invited lectures, helped to plan international meetings and conferences, and published more than 35 peer-reviewed publications. He has also been a recipient of a "Young Scientist Award" from the journal Nuclear Physics A, presented at the Quark Matter 2012 meeting in Washington, DC.