Scientists Use X-rays to Connect Mantle Chemistry with Carbon Cycle

Study at NSLS may help reveal the role of mantle oxidation states in understanding the Earth's deep interior. 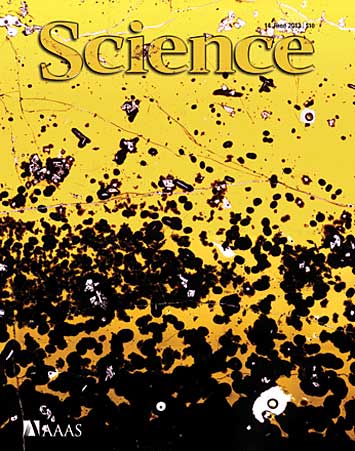 Featured as the cover story for Science, this image shows volcanic lava erupted onto the seafloor solidified as glass encases clues about its origins in the depths of Earth.

Molten lava erupts from Earth's mantle at a scorching 1000 to 1300 degrees Celsius. But when the hot liquid rock spews from a mid-ocean ridge volcano, the lava succumbs to the seafloor's freezing waters and crushing pressures – solidifying into volcanic glass. Geologists Elizabeth Cottrell, from the Smithsonian National Museum of Natural History, and Katherine Kelley, from the University of Rhode Island, analyze mid-ocean ridge basalt glass to better understand Earth's deep interior and ancient past. Their work hints at a connection between the mantle's geochemistry and the carbon reservoirs stored for billions of years in the depths of our planet.

The pair used x-rays produced by the National Synchrotron Light Source (NSLS) at the U.S. Department of Energy's Brookhaven National Laboratory to examine a large collection of deep-sea glass in order to uncover geochemical "fingerprints" left behind during the magma's ascent and eruption.

"In our study we looked at lavas from volcanoes on the sea floor all around the globe, and we measured the oxidation state of iron," said Cottrell. "We wanted to know if that could tell us something about the history and character of the mantle that melted to make those lavas, and then froze to form the glass."

To uncover the clues trapped within the glass they first polished the samples to be very thin, about 30 to 100 microns thick – the thickness of a few human hairs. They then used x-rays at NSLS beamline X26A to probe the oxidation states of iron atoms in the samples. The oxidation state is an indication of the atom's electrical charge, determined by the number of electrons in its outer shell.  Specifically, they wanted to know if the mantle samples were oxidized (containing predominantly iron with an oxidation state of 3+, meaning three electrons are "missing" from the outer shell), or reduced (containing iron with an oxidation state of 2+).

As iron in the volcanic glass absorbed the x-rays produced at NSLS, the team recorded the intensity and precise energy of the absorbed radiation and compared it to that of standard glasses with known iron oxidation states. Through this comparison, they could quantify the oxidization state of iron in their volcanic glasses.

According to Cottrell, the oxidation state of iron in the mantle plays a key role in making Earth habitable because it determines what types of gases enter the atmosphere as the mantle melts. Major differences in oxidation states could result in volcanoes that emit carbon monoxide rather than carbon dioxide, or methane rather than water.

The pair's data showed that the oxidation states of iron varied from place to place depending on the mantle's characteristics – but in a way that was much different from what scientists had previously thought.

They found that highly incompatible elements – barium, thorium, and lanthanum – which don't easily fit into the crystal structures present in the mantle, and thus readily enter the liquid part of the magma when the mantle melts, were present at higher concentrations in the volcanic glass that was relatively reduced (had a higher ratio of 2+ to 3+ iron).

Cottrell and Kelley searched for clues encased in the glass to help explain their surprising findings. They found that the mid-ocean ridge basalts that were relatively reduced had concentrations of highly incompatible elements that were similar to carbonatites, which are rocks that form when the mantle melts in the presence of carbon. With this hint, the two reasoned that carbon may be acting to reduce the oxidation state of the basalts.

"What many people don't realize is that probably 90 percent of the carbon on the planet is in the deep Earth below the surface, in the mantle, and in the core of the planet," said Cottrell. Deep-earth carbon is very pure, like graphite or diamonds, said Cottrell. But the carbon found in magma at the sea floor is combined with oxygen and occurs in the form of a carbonate ion.

According to Cottrell, carbon gets its oxygen by "stealing" it from iron-oxide compounds deep in the Earth as the mantle melts and ascends to the ridge.  Removing oxygen from iron oxides changes the iron's oxidation charge from 3+ to 2+, and the carbon becomes the carbonate ions found in the volcanic glass.

"With carbon, we have both the geochemical fingerprint and also a mechanism for creating this correlation," said Cottrell.

The findings may also help scientists understand where in the mantle carbon concentrations are highest. The research will also bring them a step closer to understanding how much carbon is in the mantle presently and how it might have changed through geological time.

"What our study is telling us is that there are variations in mantle carbon content. With these findings we might be able to use the oxidation state of iron to map Earth's carbon content," said Cottrell. "Given that carbon is so important to life at the surface, this is important for geologists to figure out."

This current work on the connection between the mantle and the global carbon cycle was published as the cover story of the June 14 edition of Science. The research was funded by the Deep Carbon Observatory and the National Science Foundation.

One of the world's most widely used scientific research facilities, the National Synchrotron Light Source (NSLS) is host each year to 2,400 researchers from more than 400 universities, laboratories, and companies. Research conducted at the NSLS has yielded advances in biology, physics, chemistry, geophysics, medicine, and materials science. The NSLS is supported by the DOE Office of Science.