Scientists are just beginning to discover and investigate materials that can change from insulators to conductors at room temperature under an applied voltage. There are only a few known examples, but their potential for use in new technologies – as futuristic as the “invisibility cloak” donned by Harry Potter in the book series by the same name – is very exciting.

At NSLS, researchers have studied a new addition to this elite group – nanowires made of vanadium oxide bronze – and measured drastic, never-before-seen transitions from insulator to conductor. Their work also hints at what happens at the atomic-level. This is a crucial step toward developing possible applications, which include a type of computer memory known as a memristor, now in development at some companies; new varieties of electrochromic coatings, thin films that reversibly change color in response to an applied voltage; and transistors. 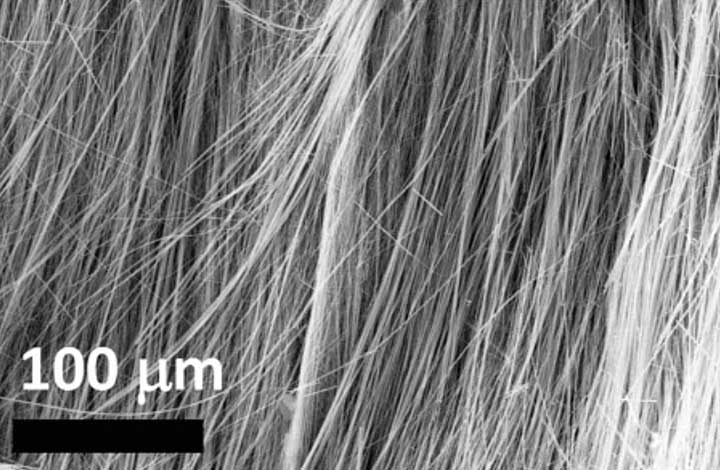 Here, researchers from the University of Buffalo used several x-ray and microscopy methods to study the nanowires, some to characterize the wires after synthesis and others to “see” what happened when the wires were pressed into pellets and subjected to an electric field. Together, the techniques yield a detailed picture of the wires' atomic and electronic structures before and after the transition.

The wires are made of the elements vanadium, oxygen, and lead (in the form of positive ions). The group created them using a synthesis method that yields very high-quality samples. This is an important achievement in and of itself, as the inability to create samples with structures that are nearly defect-free has previously been a roadblock to studying these materials, as too many imperfections stifle the phenomenon.

When the group applied a voltage to the nanowire pellets, they watched the current increase very slowly and then spike at a certain threshold voltage. While this effect was the most dramatic at cold temperatures, it was still evident up to room temperature.

X-ray measurements indicate that the mechanism behind the transition is a flooding of charge carriers (electrons) that occurs when the voltage reaches the threshold. This increase in carrier density “melts” the charge ordering pattern, the ordered arrangement of sites within the atomic lattice where the electrons bunch.

“These nanowires make for a rare addition to the roster of materials exhibiting a pronounced electrically tunable metal–insulator transition at room temperature,” said Sarbajit Banerjee of the University of Buffalo, the study's lead researcher. “Electrically inducing a threshold carrier density can uncloak a wide variety of eclectic transport phenomena in these materials, and we are excited to further investigate this.”

Additionally, the group's analysis shows that each nanowire is nearly perfectly crystalline and, with an average diameter of 170 nanometers (nm) and a length at least 500 times as long, has a high “aspect ratio.” For a nanowire, this is a very desirable quality as it allows current to flow down an extremely narrow, nearly one-dimensional channel. The vanadium oxide takes on three different molecule shapes, each forming chains that stretch the full length of the wire. The lead ions are located in the tunnels between the chains.

The portion of the x-ray research performed at NSLS took place on beamlines U7A and X23A2. The full study was published online on August 17, 2012, in Advanced Functional Materials.