The Big Move: A Last Look at the Muon g-2 Ring's Departure from Brookhaven 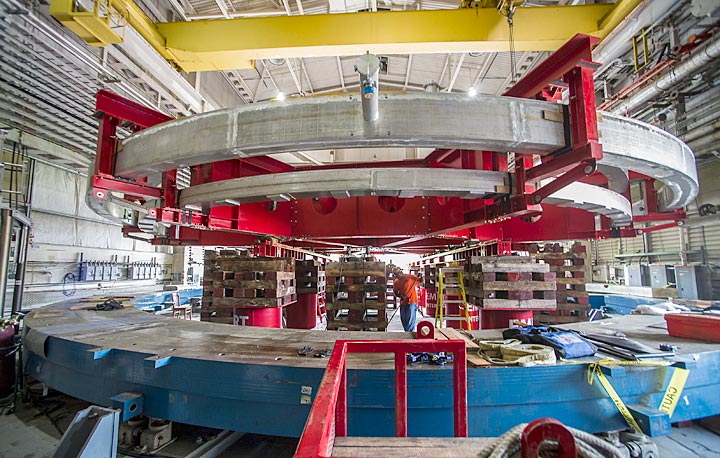 The massive electromagnetic muon storage ring can be seen here exiting the building where it gave Brookhaven Lab researchers a tantalizing glimpse of physics beyond the Standard Model.

The mighty Muon g-2 ring has finally completed its month-long 3,200-mile odyssey by barge and truck from Brookhaven National Laboratory to its new home at Fermilab in Batavia, Illinois. But before the $25 million electromagnet could trek along the eastern coastline, round the tip of Florida, and navigate the twists and turns of the Mississippi River, it had to first leave Brookhaven’s Building 919 and move to the Smith Point Marina.

A large team of Brookhaven Lab employees—including engineers from the Collider-Accelerator Department and experts from the Safety and Health Services Division (SHSD)—coordinated the journey’s crucial first steps alongside researchers and project managers from Fermilab, professional moving contractors, and tradesmen. Lab employees worked for months with representatives from the heavy transportation company Emmert International and the New York State and Suffolk County police offices to map out the magnet’s departure—from its parade across campus and exit through the main gate, to its midnight cruise down the William Floyd Parkway and South Shore farewell.

The planning was not without its challenges, which should be expected when transporting a 17-ton, 50-foot in diameter structure that contains coils too delicate to twist more than 3 millimeters without rendering the whole device defunct. To tackle the challenge, the team had to first decide how the muon ring would make its exit from Long Island. The coordinators dabbled with the idea of transporting the magnet solely by truck and even helicopter more than 900 miles cross-country to Fermilab. But ultimately they decided that the safest and most cost-effective option was moving the magnet by barge along the east coast and up through the Mississippi river.

The next step was locating which dock worked best for shipping the electromagnet from Long Island. The team first identified Shoreham on the North Shore as the ideal site from which to set sail, but that fell through after strong winds from Hurricane Sandy left behind a large sand bar that would be too expensive to dredge. The collaboration then looked to the South Shore and chose the Smith Point Marina as the seaside send-off point.

The first leg of the mighty Muon g-2 electromagnet's journey to Fermilab went smoothly thanks to the engineering expertise of Emmert International. Watch these highlights of the 50-foot-wide, 17-ton ring's move across Brookhaven Lab and out to Smith Point Marina. Catch the rest of the journey over the sea, up rivers, and across Illinois highways at http://muon-g-2.fnal.gov/bigmove/.

“Once the route was identified with Emmert as well as laboratory protection and site resources, the consideration was the amount of vegetation or trees that needed to be taken down, for the north gate versus the main gate,” said Michael Pena, manager of the Laboratory Protection Division.

They chose the Lab’s main gate as the best option for making the magnet’s exit from campus since it offered a more direct route to the marina via the William Floyd Parkway and would result in the least amount of vegetation removal.

“We cut trees down because we didn’t want to damage the device,” said Tim Green, Natural Resources manager for the Lab’s Environmental Protection Division. “If you hit it up against a tree, you’re going to damage and ruin a $25 million piece of equipment.”

Green helped identify the trees that had to be cut or trimmed in order to make way for the magnet’s passage. Overall the team cut down nine ornamental trees and trimmed several others to make sure that the magnet had its necessary 60-foot-wide space to move down the campus roads safely.

With the first steps of the Big Move mapped out, the magnet was slated to begin its move on June 14, but heavy rain and strong winds delayed the operation by a week. The following weekend provided sunny skies and beautiful weather for the first leg of g-2 ring’s three-day trip off Long Island. Beginning at Building 919, a police entourage escorted the magnet 1.8 miles across the Lab site. With a patrol car in front and another in the rear, the magnet was transported by truck to the main gate. The Brookhaven Lab police used a leapfrog technique of shutting down sections of the campus roads to control traffic as the ring moved, and then reopening those sections as the ring passed those points.

“We didn’t want to shut down the entire roadway of Upton Road and Princeton Avenue, so we developed a strategy to have a police escort on the front and rear of the ring,” said Pena.

This strategy helped prevent the police department from having to close entire roadways and disrupt normal business traffic flow. It also ensured that the on-campus fire department was not blocked from making emergency trips during the magnet moves.

While crossing campus, the electromagnet paraded past some 50 guests lined up to observe the spectacle at the corner of Upton and Brookhaven Avenue. Among the viewers was Bill Morse, physicist and collaborator on the original g-2 experiment, who had been an essential part of the planning team for over two years.

“I couldn’t believe it was really happening,” said Morse. “We had discussed so many different options, and now it’s happening. This is wonderful.”

Physicist Volodya Tishchenko also attended and took pictures of the giant instrument. “It was exciting to see people from not just the physics department, but from different departments as well,” he said. “For these people it was something to watch and something they were interested in.”

The magnet finished its trip across campus and parked right across from the main gate next to the police gates to wait for its midnight run on William Floyd Parkway and on to Smith Point Marina. The ring was under fulltime security while it waited for nightfall.

“Once it left the site out the William Floyd parkway, that’s when our mission ended,” said Pena.

Brookhaven’s Ginger Blanda of SHSD was one of the professionals to provide support in the field and in the work planning process to ensure the safety of all workers during the site preparation for the machine transport.  The hazards of the project required a thorough evaluation of the job and safety analyses that considered elevated work, fall protection, heavy equipment operation, rigging and lifting, digging, and the removal of trees, street signs and lights.

The Suffolk County police offices took over transporting the massive magnet as it rolled down the parkway. The magnet received a police escort similar to the one that Brookhaven police officers had set up during its on-campus move. William Floyd Parkway was closed down section-by-section instead of as a whole so that the procession could move smoothly down the six-mile trip to Smith Point Marina. Onlookers lined the highway to catch a glimpse of the illuminated, shrink-wrapped electromagnet as it cruised by at around 10 mph.

The magnet arrived ahead of schedule at the Smith Point Marina in the early hours of Monday morning. Later that day, Emmert International hoisted the apparatus with a large crane and gently placed the behemoth on a waiting barge. The barge then set sail, marking the end of the first phase of Muon g-2 ring’s long journey.

“The successful completion of the project was the direct result of the concerted effort by all workers doing their job while adhering strictly to all hazard controls, personal protective equipment requirements, and good work practices, all as part of the carefully orchestrated move with a very tight schedule,” said Ed Nowak, manager of Brookhaven Lab’s Safety & Health Services Division.

The entire move across the country wrapped up on Friday, July 26, and Symmetry magazine covered the arrival at Fermilab and journey around Florida, up rivers, and over the Illinois roadways.