Imaging with Nanoscale Resolution at NSLS-II

What does it take to make a clear image at nanoscale resolution? The biggest challenge is keeping your camera and your object very, very still. To minimize any blur on such a small scale, you must control vibration in the imaging system, which can occur on the atomic level because of changes of temperature, pressure, or even slight movement that isn’t detectable outside the molecular level.

With the emergence of ultra-bright synchrotron light sources – including the National Synchrotron Light Source II (NSLS-II) at Brookhaven National Laboratory – scientists are taking advantage of deep x-ray penetration and larger depth of focus for exploring the nanoworld.  However, they also face the challenge of manipulating nano-focused x-ray beams for nanoscale imaging, which requires longer data acquisition time than electron imaging. 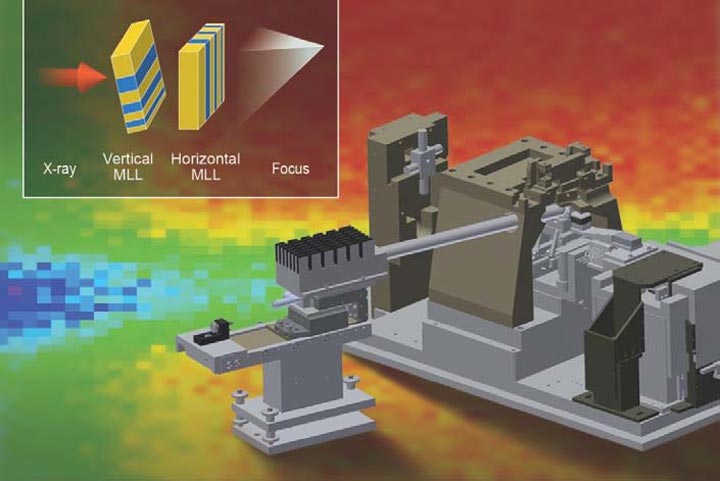 A team of scientists at Brookhaven National Laboratory developed a systematic approach to address these technical challenges, which included adopting compact and high-stiffness components, reducing heat generation, and damping ambient temperature fluctuation. Once applied, these techniques enabled the construction of a prototype x-ray microscope capable of capturing a stable image at 10-nanometer resolution – that’s about half the width of a DNA molecule

“We decided to utilize the knowledge known to the community that does scanning probe microscopy research,” said Evgeny Nazaretski, a physicist in the NSLS-II experimental facilities division. “In this area, scientists build research instruments which use small scale components and pay a lot of attention to thermal effects, and as a result they routinely perform sub-nanometer spatial resolution experiments.”

To ensure clarity in sub-nanometer imaging, the team devised two tests for a microscope’s interferometer. To characterize the long-term stability of the interferometer hardware and electronics, they constructed a cryogenic system and cooled a test cavity to a liquid nitrogen temperature. Data gathered from this vacuum chamber over 40 hours showed a thermal drift of 1.25 nanometers, due to the slow boiling off of liquid nitrogen. The second test for the interferometer is a resolution test. To verify the amount of noise the interferometer would encounter, they constructed a test bench enclosed in an insulating box and equipped with sound absorbing foam to reduce acoustic noise. At ambient temperature, thermal and pressure fluctuations increased the background noise to about 1 nanometer.

To use these tests, the Hard X-ray Nanoprobe (HXN) team and their collaborators from Argonne National Laboratory and Diamond Light Source (UK) designed and constructed a prototype scanning fluorescence microscope that focuses an x-ray beam using multilayer Laue lenses. They performed stability, resolution and thermal drifts tests on the microscope at the Nanopositioning Laboratory at NSLS-II. Once they had minimized distortion due to possible changes of ambient temperature, pressure, thermal drifts and outside motion, they put the microscope to the test.

By imaging gold test patterns to verify the instrument’s capabilities at Diamond Light Source, the team showed that their systematic approach and careful analysis of individual components of the instrument produced a prototype microscope with excellent stability. Not only will this microscope be useful, said Yong Chu, the HXN group leader, but the method will offer others an approach to overcome the technical challenges of nanometer-scale spatial resolution x-ray microscopy in the hard x-ray regime.

“The approach we worked out is applicable for many x-ray microscopes to be built,” said Hanfei Yan, an HXN beamline scientist and a co-author of the paper. “A lot of the design work for this system originates from the construction of a prototype system which is featured on the cover of Review of Scientific Instruments, March 2013.”

A more advanced x-ray microscope, based on experienced gained from the prototype instrument, will be installed at the HXN beamline at NSLS-II, which is designed to explore new frontiers in hard x-ray microscopy and enable scientists to discern structures at ever-smaller spatial scales, with the possibility of reaching even smaller than a billionth of a meter.

This research was funded by the National Synchrotron Light Source II and the U.S. Department of Energy.