By Andrei Nomerotski and Michael White 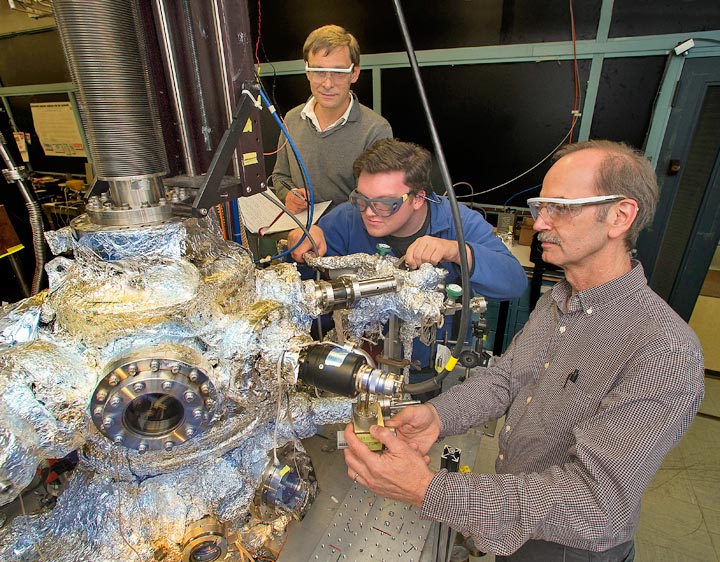 Way beyond pure illumination—from bright sunshine to intense x-rays at the National Synchrotron Light Source (NSLS)—light can pack a powerful punch down at the atomic scale. When light strikes organic compounds bound to certain surfaces, it can split them into atomic and molecular fragments called photoproducts. These fractured pieces offer crucial clues to how and why light breaks some chemical bonds, which is at the core of understanding how solar energy can be used to remove pollutants from the environment.

Just one organic molecule can break into many photoproducts and capturing each one presents a considerable, time-consuming challenge. We used a highly specialized system—the Pixel Imaging Mass Spectrometry (PImMS) camera—to bring this light-induced process into focus. Results of our experiments using the new PImMS camera to capture these telltale photoproducts were just published in the Journal of Chemical Physics and highlighted in Physics Today. With PImMS performing beautifully, the technology could also be used in research at NSLS-II and the proposed electron-ion collider, eRHIC.

Several years ago, Michael and his colleagues in the Chemistry Department began exploring how ultraviolet (UV) light can cause organic molecules on titanium dioxide surfaces to decompose into photoproducts. This important reaction, called photo-oxidation, removes organic pollutants from air and water and is the basis for windows and building exteriors’ self-cleaning coatings.

Before PImMS, we used a technique called ion imaging and a conventional imaging camera—with a charge-coupled device (CCD) sensor similar to those in consumer cameras—to track photoproducts that struck a two-dimensional detector. But in this method, each of these many photoproducts must be captured as individual images, requiring multiple sample preparations and time-consuming repetition. We needed a better camera to catch all the action.

Fortunately, an Oxford University group—including Andrei, who only recently joined Brookhaven’s Physics Department to work on the Large Synoptic Survey Telescope—developed a new camera capable of conventional imaging while simultaneously measuring the arrival time for each photoproduct that strikes the detector. This information acts much like a photographic time stamp and could essentially reveal all the photoproducts with a single image exposure.

Now, instead of repeatedly capturing and reading out whole frames, one after another, PImMS records up to four ion arrival times inside each pixel, a bit like multiple exposures on a film camera. We then read out the sensor just once at the very end of the experimental cycle to gather all that information, accelerating the entire process. In fact, the PImMS camera has an effective imaging speed of just 10 nanoseconds—that’s 100,000 times faster than a conventional CCD camera—and experimental cycles can now take 25 percent of the time they used to. The new sensor combines time-of-flight mass spectrometry to identify multiple molecules, and sensitive ion imaging, which revolutionized the field of chemical reaction dynamics.

Our first experiments with PImMS looked at the photo-oxidation of an organic pollutant and common industrial solvent, methyl ethyl ketone (MEK), on titanium dioxide. The UV light broke the MEK apart, and the PImMS camera successfully detected all the photoproducts with just a single measurement. The results show promise for future investigations into photocatalysis on surfaces, and upgrades in the near future will further enhance the PImMS technology.

PImMS was developed primarily for mass spectrometry, but it’s also attractive for other research areas. So far we’ve used the camera to study chemical reaction dynamics, analyze surfaces, for bio-molecular imaging, and to detect neutrons. Andrei Fluerasu of the Photon Sciences Directorate is now preparing the PImMS sensor for time-resolved x-ray imaging at NSLS-II. This technique is essential to photon correlation spectroscopy (XPCS), which reveals nanoscale dynamics of materials such as fluctuating biomembranes—cellular interfaces with major applications in nanotechnology and bio-inspired materials science. Compared to other detector technologies, PImMS-like sensors could also track charged particles with less material and even increase precision for the proposed eRHIC upgrade to Brookhaven’s Relativistic Heavy Ion Collider.

Our collaborators at Oxford are currently testing a second-generation sensor, PImMS-2, with 324 by 324 pixels—about 20 times larger than its predecessor. With funding from the Laboratory Directed Research and Development (LDRD) program, we are gearing up to start experiments when the new sensors arrive. We are also planning improvements for sensor sensitivity by developing microlenses spanning just 35 micrometers—thinner than a human hair—to fit on top of the sensor and make the camera four times more sensitive. We’ve also got a new system in the works for faster data acquisition, which is required for the bigger, second-generation sensor. With these ever-advancing portraits of photoproducts, PImMS brings us closer and closer to harnessing the power of light-induced reactions.