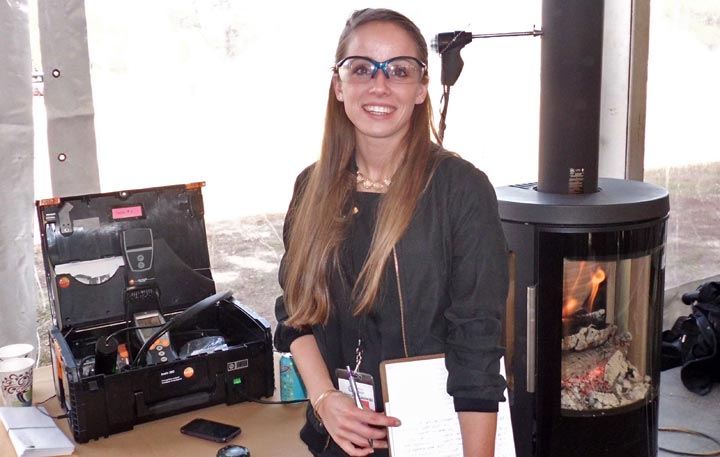 A team from Brookhaven National Laboratory’s Energy Conversion Group in the Sustainable Energy Technologies Department recently played a key role in a four-day competition to identify the world’s most efficient and innovative wood stove designs. The Wood Stove Decathlon, sponsored by the Alliance for Green Heat, was held on the National Mall in Washington, D.C. November 15-18, putting stoves from 12 competitors from around the world to the test.

A panel of judges, including Brookhaven Lab’s Energy Conversion Group Leader Tom Butcher, awarded the $25,000 first prize to the New Hampshire company Woodstock Soapstone for its hybrid stove, which combines two-stage combustion and an emission catalyst.

Woodstock Soapstone generously shared the $25,000 prize with Walker Stoves and IntensiFire, teams that competed without financial sponsorship. The $10,000 second prize was shared by Wittus-Fire by Design and Travis Industries, which donated its share of the prize back to the Alliance for Green Heat.

“Wood use for heating is one of the most important sources of ambient air particulates in the northeast,” said Butcher. “It produces more particulates than electric power generation, or even diesel trucks. Since it is by far the number one renewable energy source in residential buildings, getting wood heating emissions down is hugely important.” 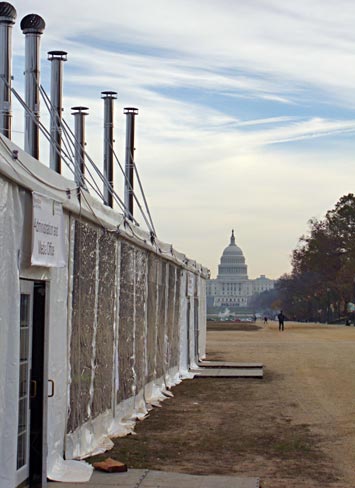 Wood-burning stoves from 12 competitors from around the world were set up inside a large tent on the Mall in Washington, D.C. Photo courtesy Ray Albrecht.

The 12 stoves in the competition were selected from a much larger group of applicants, following a review of the technologies and their degree of innovation. Competitors from as far off as New Zealand and as close as the University of Maryland were represented.

Butcher said all of the entrants’ technologies showcased innovative ways to ensure that the fuel burns completely and emissions are minimized through combustion chamber design. Two-stage gasification/combustion designs and catalysts are two examples of technologies being used.

“But from my perspective, the most exciting degree of innovation being applied involves advanced controls and sensors,” he said. “Oxygen sensors, temperature sensors, sensors used to control the position of dampers and speeds of fans will optimize the combustion throughout the entire process.”

The selection of the winner was based on multiple criteria. User interface, serviceability, and cost were important considerations but ultimately the key goals were efficiency and emissions reduction.

“That was really the challenge: to measure exhaust gas particulate emissions in a repeatable, real-time way in a non-laboratory, field environment,” Butcher said. “There’ve been some interesting changes in Europe recently that have helped us with this, including a requirement to inspect wood-burning equipment in homes and prove that emissions are low enough for continued operation, sort of like an automobile annual emissions check. To do that, they had to develop analyzers that would be capable of running in the field.”

In the weeks prior to the competition, Brookhaven staff tested those analyzers against laboratory-based analysis, including direct filter-based measurements and optical measurements, to demonstrate that the analyzers would give repeatable, accurate results since there was no opportunity to test the stoves with a standard protocol.

“It was really challenging to analyze samples under the very difficult field conditions of a tent on the National Mall in Washington because of the limited availability of analytical support, the limited space available, and the flow of observers.” Butcher said.

Trojanowski said that each stove was tested two or three times over the course of the competition, for 15 minutes each time. Each stove had to be tested over the same part of a typical batch burn cycle, and getting these conditions right often required hours of preparation.  The competition took place under a large tent, divided into a test room where the stoves were set up, and a seminar room where participants, including both Butcher and Trojanowski, gave presentations.  Other speakers included Elliott Levine from the U.S. Department of Energy Bioenergy Technologies Office.
Following four days of competition, a ceremony was held to announce the winner.

“The winner gets encouragement and recognition, along with the cash award, but one of the key things that this competition has done is to highlight the fact that wood can be used in a much cleaner way in this market sector because there’s been very little attention paid to reducing emissions from these sources,” said Butcher. “I hope that more universities and private companies will focus in future years on trying to identify and develop technologies that can get emissions down further. If this competition does nothing more than bring more attention to the technologies needed to reduce emissions in this area, I think it will have been a great success.”