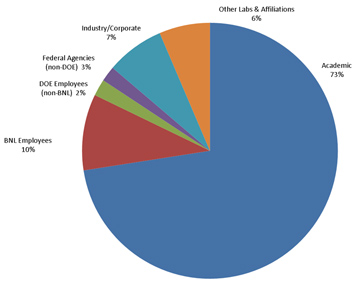 In fiscal year (FY) 2013, over 2,300 visiting scientists were drawn to the National Synchrotron Light Source (NSLS) to carry out their research. They came from across the U.S. and around the world and from over 400 institutions. At least one third of these visiting scientists used the facility for the first time.

Users are primarily awarded beam time by submitting a general user proposal through a peer-reviewed, web-based system. The proposal is rated on various scientific criteria.

More than 1,200 requests for beam time were submitted in FY13, and roughly a third were new proposals. Beam time is awarded without charge, as long as the research results are published in the open literature. Proprietary work is charged on a full-cost recovery basis consistent with U.S. Department of Energy (DOE) guidelines. 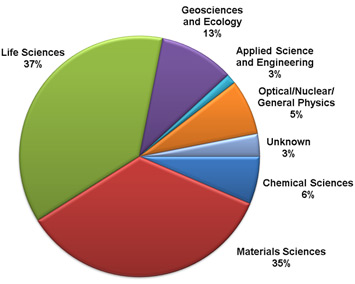 The majority of NSLS users, 73 percent, come from academic institutions, and about one third , or 37 percent, come from New York State. Another third come from the Northeast. About half of the users are U.S. citizens and almost 70 percent are women. (In comparison, 27 percent of users were women in fiscal year 2010.)

Users in the life sciences account for 37 percent, closely followed by users in materials science  at 35 percent. In FY13, approximately 42 percent of the researchers working at NSLS were students in undergraduate or graduate programs. About 21 percent of the users were post-docs, with faculty members, professional staff, or research scientists making up the balance. 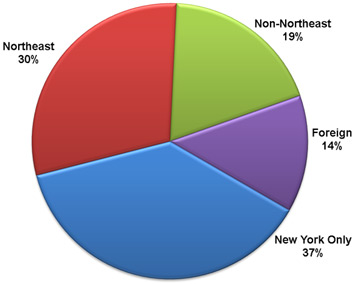 User statistics are compiled and reported to DOE’s Office of Science by the Photon Sciences User Administration Office.

Please note: NSLS operations will end in FY14. The upcoming proposal deadline of January 31, 2014, will be for beamtime during the NSLS operating cycle of May-September 2014. More information is available in the FAQs section of the Transition Topics website, where the Photon Sciences Directorate has posted information to help users continue their work elsewhere when NSLS closes.