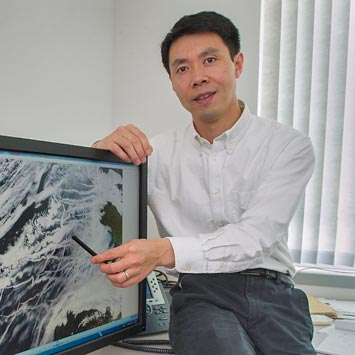 When the GOAmazon project is officially launched this week in Manaus, Brazil, Brookhaven Lab’s Jian Wang will play a key role. Since joining the staff of the Lab’s Atmospheric Sciences Division in 2005, Wang has developed and implemented new techniques for measuring concentrations and size distributions of tiny particles in Earth's atmosphere, and assessing their impact on the formation of clouds and Earth's climate.

In Manaus, U.S. Department of Energy researchers are joining scientific collaborators from the United States, Brazil, and Germany to launch a two-year field study in the Amazon Basin.  Data obtained during the Green Ocean Amazon (or GOAmazon) field campaign will enable scientists to study the intricacies of the natural state of the Amazon rainforest atmosphere and land systems and how these may be perturbed by human influences such as pollution and deforestation.  The field study started in January 2014 and runs through December 2015.

On Wednesday, February 19, Wang will join University of Sao Paulo professor Paulo Artaxo of in leading a tour of Iranduba, one of three ground sites where a suite of instruments will be deployed to characterize atmospheric aerosols and clouds.

Aerosol particles can have significant influences on climate—not only directly through the absorption and reflection of sunlight, but also indirectly by modifying the brightness and lifetimes of clouds.

“We try to understand how human activities influence the formation of aerosol particles and earth’s energy balance.” Wang said. “Increased aerosol concentrations caused by human activity tend to cool the climate by reflecting more solar radiation and making clouds brighter and more persistent.  However, it is difficult to quantify these effects because many of the underlying processes are very complex.  To predict these effects, we also need to understand how many particles are produced by human activities.”

To understand the intricacies of the natural state of the Amazon rain forest, the Green Ocean Amazon, or GOAMAZON, field campaign is a two-year scientific collaboration among U.S. and Brazilian research organizations. As a critical component of GOAMAZON, the ARM Mobile Facility (AMF) will obtain measurements near Manacapuru, south of Manaus, Brazil, from January to December 2014. (DOE ARM Climate Research Facility photo)

To begin to quantify human effects on aerosol particle formation, the research teams need to determine the starting point.

“Aerosol particles at most continental sites are influenced by human activity,” Wang said. “This field campaign takes place at Manaus, a city with a population of ~ 2 million and is surrounded by hundreds of miles of pristine tropical rainforest. This allows us to study both very clean, unperturbed conditions, and how much perturbation human influence has on the environment as the wind direction varies.

“Three sites are strategically positioned so we can observe how aerosol particles evolve in the atmosphere,” he said. “The first site is inside the city of Manaus, and the other two are at different distances downwind.  By comparing the results from these sites under prevailing wind conditions, we can examine how particles becomes more efficient in absorbing and scattering solar radiation as well as forming cloud droplets through chemical reactions and physical processes.

The GOAmazon project also includes sampling from aircraft to observe aerosol formation and cloud properties at different altitudes, and Wang together with a team of scientists from Atmospheric Science Division are deploying a suite of instruments both at the surface site and onboard the aircraft.

“Brazil is a very under-sampled region,” Wang said. “But we have wonderful collaborators in Brazil helping to make everything happen.”