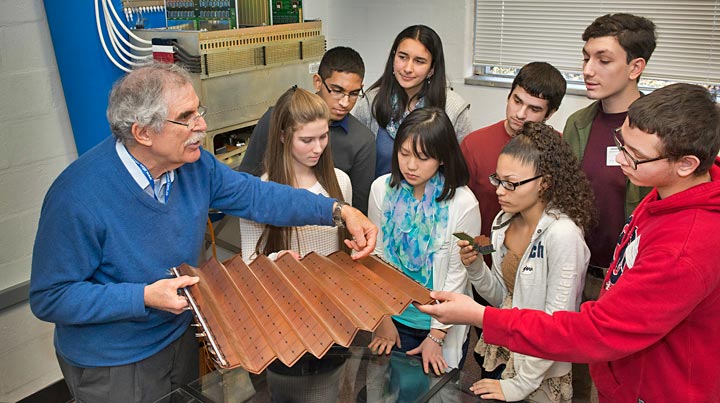 On Friday, March 21, 55 Long Island high school students got a chance to experience what it’s like to be part of a large international physics collaboration by participating in a particle physics “International Masterclass” with physicists involved in research at the Large Hadron Collider (LHC), the world’s largest particle collider, located at Europe’s CERN laboratory. The students—from the Smithtown, Shoreham Wading River, Farmingdale, and William Floyd school districts—analyzed data from the LHC’s ATLAS experiment and presented their results via live videoconference from the U.S. Department of Energy’s (DOE) Brookhaven National Laboratory to physicists at CERN, along with students similarly linked in from Germany and Ireland.

“The CERN Masterclass is a microcosm of how physicists collaborate to explore the frontier of particle physics.”

The event was part of a larger annual effort to engage students worldwide in the exciting world of particle physics, coordinated by Dresden University of Technology and QuarkNet—a U.S. program for professional development of teachers supported by the National Science Foundation and DOE—and managed by an international steering group in close cooperation with the International Particle Physics Outreach Group. The organizers expect 10,000 students to participate over a one-month period during March and April this year.

Prior to arriving at Brookhaven for the event, the Long Island students had conducted analyses of LHC data under the guidance of Brookhaven physicist Helio Takai, who has been coordinating Brookhaven’s participation in these master classes for eight years.

“The CERN Masterclass is a microcosm of how physicists collaborate to explore the frontier of particle physics,” Takai said. “We have been lucky to partner with great physics teachers from schools near us for this fabulous experience.” 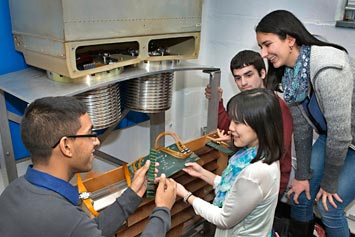 The students were searching for evidence of W+ or W- particles—two types of subatomic particles picked up by the ATLAS detector as it tracks the products of the LHC’s proton-proton collisions. They measured the ratio of W+/W-.  There were a few events where the Ws could have been produced by the decay of a Higgs particle, a long-sought quarry of particle physicists.

While at Brookhaven, the students also heard from physicist Howard Gordon, who recounted the discovery of the Higgs, and Steve Bellavia, who shared details of the Lab’s role in the Large Synoptic Survey Telescope project. They also briefly toured the National Synchrotron Light Source.

The trip was an eye-opener for many.

“We had a bit of background [in LHC physics] before coming,” said William Floyd High School student Jennifer McDermott, who presented the Long Island group’s results during the videoconference.

The students had prepared for the event on two separate afternoons in the weeks prior to the Brookhaven visit. In the first meeting, at Smithtown High School East, Takai and other speakers presented lectures and demonstrations to introduce the students to the various subatomic particles and how to detect them. In their second meeting, at William Floyd High School, the students analyzed 1000 ATLAS events to arrive at the results that were presented during the videoconference.

“Doing the analysis gave us some more information on what the Ws were, and participating today gave us even more,” McDermott said.

Both she and classmate Dazia Enriquez nodded enthusiastically when asked if all the work was worth it.

The power of collaboration

Perhaps the biggest lesson came after all three groups—from New York, Dublin, and Hamburg—had presented their results, each based on a few hundred LHC collision events. Alone each group’s result showed a pattern that mirrored the shape of the overall ATLAS results for W+ and W- particle production—but with low statistics and fairly large error bars. 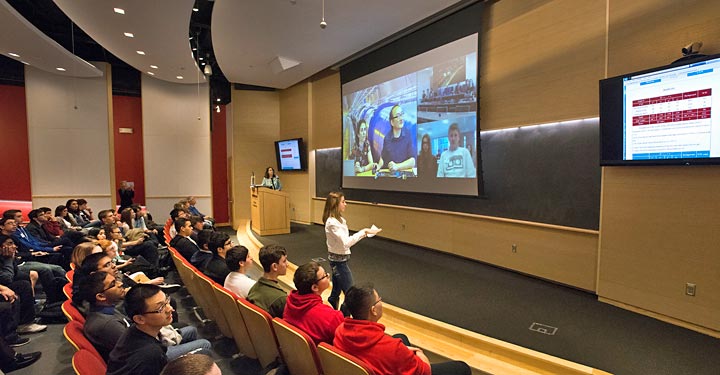 Jennifer McDermott of William Floyd High School presents the Long Island students' results to Barbara Alvarez Gonzalez and Duc Bao Ta, postdocs at Michigan State University who are currently working for the ATLAS collaboration at the LHC, and fellow students presenting their own analyses from Hamburg, Germany, and Dublin, Ireland.

“We didn’t get that much data,” said McDermott, “but what we found was similar to what ATLAS found. With the errors it was within range of what they got—31 events.”

But when the CERN scientists showed the combined results, the pattern became stronger and the error bars shrank.

“With this combination, you see that we have almost 300 W+ and W- events—five times more than each of the institutions had alone,” said Barbara Alvarez Gonzalez, a postdoctoral researcher at Michigan State University, who led the videoconference from CERN along with Duc Bao Ta, also of Michigan State. “It was a lot of work for each of you to do. But by combining efforts, many more events were analyzed than could be by the individual groups. And the more events you collect the lower the uncertainty is,” she said.

That’s one reason the LHC needs to produce so many collisions—14 million per second, the scientists explained, recording hundreds of those per second to analyze.

“When you are talking about 10,000 events, statistical uncertainty is reduced to very low…but we also have a lot more people working on it,” said Ta, who showed the actual ATLAS result for the same analysis the students had done.

“The distribution looks the same, the error bars are lower, and it was still hard to deduce that this event had a Higgs,” he said. “But combining this result with the other types of analyses finally led to the discovery of the Higgs,” he added, emphasizing how each small bit of the puzzle, and each scientific team around the globe, played an important role.

The students also got a chance to ask the physicists questions—about physics or anything. They learned that both scientists’ favorite fundamental particle is the top quark, and that Gruyère, from a town quite near the LHC’s location on the Swiss/French border, tops Alvarez Gonzalez’s list of favorite cheeses.

With their appetites whetted for physics and food, the students strolled out of the seminar room for a hero lunch, and then left the Lab with plenty to digest.