Quick kudos came in from around the world at the news of first stored beam at the National Synchrotron Light Source II (NSLS-II) on April 5, 2014. NSLS-II is under construction at Brookhaven National Laboratory.

“Great News! Congratulations to you and your NSLS II team.”

— In Soo, Pohang University of Science and Technology, South Korea

“This is a very impressive and great achievement. Congratulation to you and all the teams that worked so hard and well.”

“It’s great! Congratulations to you and the whole NSLSII team.”

“Excellent news! Many congratulations from the Solaris team to you and all your people. We are working hard here in Krakow putting together the Polish light source and hope to accomplish the same in the coming 12 months! Enjoy the pleasures of commissioning a new light source.”

“Congratulation to you and all the NSLS II team! I'm looking at your new storage ring with admiring envy: there are so many interesting experiments you'll have in the future!”

— Eugene Levichev, Siberian Branch of the Russian Academy of Sciences

“This news is certainly worth a special issue of your Newsletter! Congratulations to you and the team on this first important step towards a new generation of Brookhaven light sources! Have fun with further commissioning.”

“I have spread the word among the CAMD staff members and all of us have been anticipating this major step to completing the NSLS II. This indeed is exciting news. Congratulations to all involved.”

“It is great to hear the NSLS-II exciting success. Congratulation to you and all NSLS-II team members for the success!”

All were responding to Photon Sciences Accelerator Division Director Ferdinand Willeke’s announcement of stored beam in the NSLS-II storage ring.

Willeke recounted events leading up to stored beam: “Commissioning of the storage ring started on March 26. The injector chain turned on easily and quickly that afternoon, and we achieved 3 billion electron volt beam under good and stable conditions within hours. The NSLS-II control room then extracted and transported beam through the new booster-to-storage-ring transfer line and on to the storage-ring injection septum. On March 27, we injected beam into the storage ring and did studies to confirm that the shielding in the injection section performed as designed. On March 28 and 29, after tuning and calibrating in different sections, the beam traveled around the entire ring with very few corrections needed. Late April 4 into April 5, we achieved first stored beam. Initial beam lifetime was three hours. We have much work to do in the upcoming months of commissioning, but this initial success is very encouraging.” 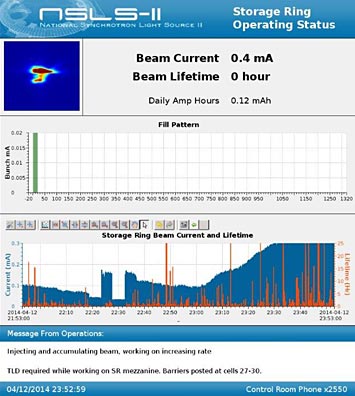 Timur Shaftan is coordinating storage-ring commissioning. “Over the past weekend we have begun accumulating the beam via successive injections and reached 0.5 milliamp in the circulating current,” said Shaftan. “Both storage ring and injector were well designed and carefully tested, which has insured rapid success with the beam commissioning so far. We have now tested with the beam many of our diagnostics devices such as beam position monitors, visible synchrotron light monitors, current transformers, and beam screens, and they are working very well, providing accurate information on the beam properties.”

Shaftan continued, “During the past few days we are studying strong-focusing low-emittance optics of the storage ring, optimizing orbit, betatron tunes and chromaticity. We are also evaluating dynamic aperture with the goal of increasing injection efficiency. Next we will accumulate 5 milliamps of the stored beam and, after additional fault studies, will proceed further with reaching higher current level.”

“The commissioning is running 24/7, and our NSLS-II control room is a very busy place with the entire accelerator team working tirelessly to make this great progress,” he added.

NSLS-II construction began in 2009, with a $912-million budget from the U.S. Department of Energy Office of Science. Construction has passed through distinct phases, starting with conventional construction of the ring building and laboratory-office buildings; installation of the accelerator and beamlines; now commissioning of the injection system, which consists of a linear accelerator, the booster (see earlier article on booster commissioning), transport lines and a storage ring; followed by commissioning of an initial suite of beamlines for early science. When completed, NSLS-II be a state-of-the-art, medium-energy electron storage ring that produces x-rays up to 10,000 times brighter than the original NSLS, which started operating in 1982 and is shutting down at the end of September 2014.