The senior mechanical engineer has mentored, advised and collaborated with dozens of former Soviet Union scientists 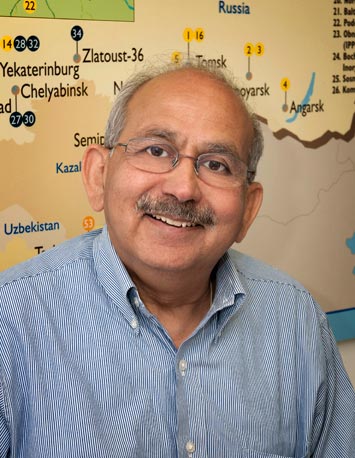 UPTON, NY — The American Society of Mechanical Engineers (ASME) has awarded the Technical Communities Globalization Medal to Upendra S. Rohatgi, a senior mechanical engineer at the U.S. Department of Energy’s (DOE) Brookhaven National Laboratory. He received the award for work helping to steer scientists formerly engaged in designing weapons of mass destruction toward more peaceful pursuits in science and technology.

The official citation recognized his “career efforts devoted to reducing the risk of the proliferation of weapons of mass destruction (WMD) and increasing global security through the engagement of scientists and engineers from former Soviet Union countries and Iraq, previously involved in WMD development, in the creation of new technologies for U.S. industries under the Global Initiatives for Proliferation Prevention (GIPP) program, and for institutions in the European Union, Japan and Canada; and through scientific collaborations at the International Science and Technology Center–Moscow.”

The prestigious award, only given to two other ASME members since its inception in 2011, comes with a $10,000 honorarium and a medal, which will be presented to Rohatgi at the annual ASME International Mechanical Engineering Congress and Exposition in November.

“I’m happy to join their company,” Rohatgi said of the previous awardees. “I was a little surprised, because the others are all professors, so they go give a course in South Africa or somewhere else, or go to conferences all over the world. My experience is totally different.”

When the Soviet Union dissolved in 1991, tens of thousands of scientists who were working on nuclear weapons programs were suddenly out of work, and it became important to find new career opportunities for them to transition into peaceful research, lest they accede to terrorist or others’ offers to pay them to develop WMDs. The United States, along with the European Union, Japan, and Russia, established the International Science and Technology Center (ISTC) in Moscow, a nonproliferation program to support research and development (R&D) activities that created peaceful research jobs for these scientists. A similar institution, the Science and Technology Center of Ukraine (STCU), was established a year later in Kiev.

The DOE established a sister program to the ISTC and STCU called the Global Initiatives to Prevent Proliferation (GIPP) in 1994. Rohatgi has been program manager of GIPP since 1997 and formed and directed more than 40 industry partnerships at Brookhaven that have yielded four patents and numerous papers.

Rohatgi said the GIPP projects were “win-win-win-win,” since the former Soviet Union scientists could find work, U.S. companies could accomplish R&D for a low cost and low risk, the U.S. was redirecting scientists away from WMD careers, and many Brookhaven scientists could work on new research with international partners.

“Our goal set by DOE was to establish scientific and technology projects with industry partners from the United States to employ the weapons scientists,” Rohatgi said. “We wanted to find work for them so they would not be tempted to sell their WMD expertise to others.” He described how the program developed and succeeded in bringing in many U.S. industry partners to do collaborative work with the Soviet scientists. “The idea was that when this program ended, projects undertaken with U.S. industry would train the WMD scientists for new civilian careers that they could pursue for the future.”

In Rohatgi’s role with the State Department (DOS) as senior science advisor for the Cooperative Threat Reduction (CTR) program, he reviews and advises which research proposals to the ISTC and STCU should receive funding, and lends his expertise to DOS-CTR staff on any scientific information they need. As a mechanical engineer by training, Rohatgi said he had trouble at first advising on sciences outside his field of study, for example, biology and medicine. But he’s learned over the years to teach himself anything he has needed to know, as evidenced by the rows of books — including his daughter’s general biology textbook from college — on the shelves of his office.

In a letter recommending Rohatgi for the award, Vic Korsun, deputy executive director of the Science and Technology Center in Ukraine, said, "Importantly, [Rohatgi] has developed such relationships with these scientists that they are now more engaged in the scientific societies and communities around the world. He has been a teacher and a mentor to the scientists and engineers in these countries. He has encouraged and helped them to publish papers in international scientific and engineering journals, taught them to prepare and present technical papers at scientific conferences, [and] showed them how to prepare proposals for grant applications."

In addition to his nonproliferation work, Rohatgi has also organized more than 30 international conferences and forums on topics that have included energy security, responsible science, nuclear safety, and fluids engineering. His own research focuses on nuclear reactor safety and concepts, specifically the design and simulation of nuclear reactors under hypothetical accident scenarios. He has authored more than 100 published papers and given 20 invited talks around the world.

"Dr. Rohatgi is one of the most extraordinarily talented researchers and managers that I have interacted with in the thermo-fluid sciences field,” Bahram Khalighi, who is lab group manager at General Motors Global R&D and has worked with Rohatgi on the GIPP program, said in another recommendation letter. “His mastery of multiple research areas in this field is indicative of his outstanding research prowess as well as his uncommonly wide scientific experience."

Rohatgi joined Brookhaven in 1975 after completing his Ph.D. in mechanical engineering at Case Western Reserve University in Cleveland, Ohio. At Brookhaven, Rohatgi said he has met people from every part of the world. He encourages others to seek this kind of interaction, either through their work or by traveling internationally as much as they can.