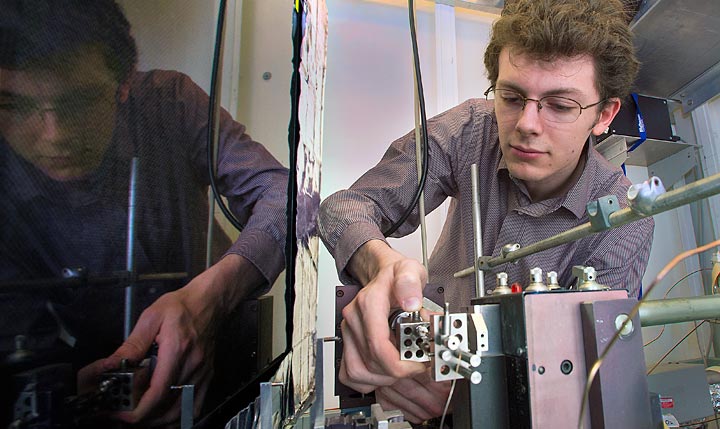 Chris Wright at the X7B beamline at NSLS, where he ran his first experiment. Wright is now working for the XPD beamline at NSLS-II, and plans to be a user at the facility after it opens in 2015.

Christopher Wright came to the Laboratory through the U.S. Department of Energy’s Science Undergraduate Laboratory Internships (SULI) program as an intern at the National Synchrotron Light Source (NSLS) in 2012, when he was a sophomore at Brown University. Now, he is spending the next ten weeks programming software for the X-Ray Powder Diffraction (XPD) beamline at the National Synchrotron Light Source II (NSLS-II), with plans to return as a scientific user after NSLS-II is up and running in 2015.

What brought you to NSLS?

I had applied for a summer internship two years ago and got the opportunity to be mentored by Dr. Sanjit Ghose, an NSLS-II scientist, working to understand the impact of synthetic conditions on the structure of cadmium selenide nanoparticles.  Dr. Ghose introduced me to the high energy x-rays of X17B3 and X7B at the NSLS, which we used to reveal the structure of these extremely small particles. Two years later I’m still working on some of the data. The data processing tools keep getting better and better, and so I can go back and it’s like I have a brighter light bulb illuminating my data.

Back then, I was working on the experimental side, trying to understand the structure of cadmium-selenide nanoparticles. It’s kind of like watching a play in football. If you look at where all the players are standing before they start, you can know something about what they’re going to do in the future. Their productivity as a team is decided by their structure; their relationship to each other. Nanomaterials are very similar, where all your atoms are and how they’re connected to one another in your nanoparticle tells you a lot about how your nanoparticle is going to act.

These particles were under investigation for optical properties. Cadmium-selenide fluoresces brilliantly under ultraviolet light, and similar particles are used in the biomedical field for tagging certain areas of a cell. Their optical properties are decided by their atomic coordinates, where their atoms are and how they’re connected to one another. I was working at X17B3, taking data on these nanoparticles. That experience and the level of structural detail we could glean from the nanoparticles using x-rays turned me into a user.

Why did you come back to NSLS as a user?

As an undergraduate, I started filing user proposals for work on nanomaterials of my own. At Brown, I was working for Professor Shouheng Sun. We do all sorts of nanomaterial synthesis, all the way from magnetic materials for next generation turbines to biomedical applications, to my work, which is in catalysis – understanding how surfaces can change chemical reactions.  In order to understand the structure of our catalyst we needed high energy high flux x-rays, which we were provided by the X17A beamline at the NSLS.

I had learned a lot by interning at NSLS and our collaborators are working here. Also, we’re only in Providence, so the NSLS is the local neighborhood synchrotron, as much as one can have a “neighborhood” synchrotron.

Do you plan to use beamlines at NSLS-II?

I’m looking forward to using the X-ray Powder Diffraction (XPD) beamline. This summer, I’m working for the beamline, writing some of the computer software that will do the physical aspects of the beamline – move the motors, turn on the detector, handle the gases and the temperature- all the aspects of the experiment you need to control.

I just graduated from Brown University with a Bachelor’s of Science in Chemical Physics, and when NSLS shuts down, I kind of luck out because I’m headed to the University of South Carolina for graduate school. I’ll be pursuing an MBA Ph.D. in Chemical Engineering supported by the National Science Foundation. But as soon as I and the NSLS-II get back online, I definitely plan on continuing with my work as a user, this time at NSLS-II. The NSLS-II will provide so much more data and capability that I will be able to run much more elaborate experiments.

At NSLS, we only have so many photons left, but if I can just hold my breath for maybe one year, I can get back in the action at NSLS-II.

For the foreseeable future, I will be using the facilities here. The NSLS-II is the best in class, so getting beam time will be very competitive, but with the huge amount of photons we’ll have, we’ll be able to do the experiments faster, so hopefully I’ll be able to make good use of whatever beam time I’m able to get.