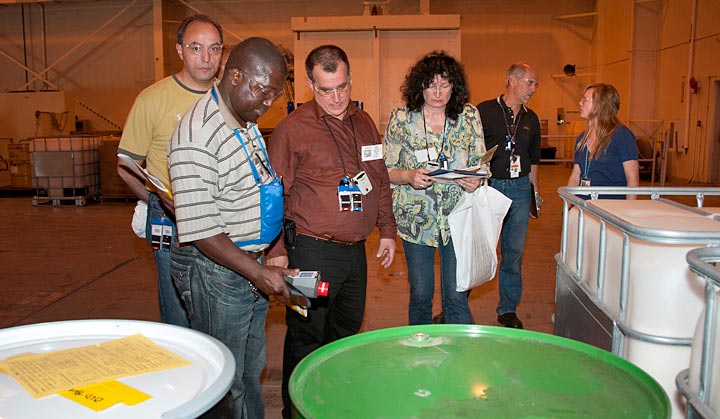 IAEA inspectors search for clues that might indicate a clandestine weapons program in "Freedonia."

During the first week in June, the U.S. Department of Energy’s Brookhaven National Laboratory hosted a group of 12 inspectors from the International Atomic Energy Agency (IAEA) conducting a mock complementary access (CA) exercise at the Lab.  The inspectors were accompanied by five senior IAEA staff as facilitators and instructors, along with staff from Brookhaven’s Nonproliferation and National Security Department and an expert from Los Alamos National Laboratory. In the exercise scenario, developed jointly by Brookhaven and the IAEA, the Lab was portrayed as the fictitious country of Freedonia, which has a clandestine nuclear weapons program.

Under Comprehensive Safeguards Agreements, the IAEA has the right and obligation not only to verify that a country’s declarations of nuclear material subject to safeguards are ‘correct,’ i.e. they accurately describe the type and quantity of the country’s declared nuclear material holdings, but that they are also ‘complete,’ i.e. they include everything that should have been declared. The IAEA’s experience in the early 1990s in Iraq and in North Korea was a major catalyst for efforts to equip the safeguards system with important new tools to verify ‘completeness.’ Some of the measures that have been developed can be implemented under the authority existing in Comprehensive Safeguards Agreements, while others required additional legal authority and resulted in a new legal instrument, the Model Additional Protocol. This was developed by a special committee of the Board of Governors (Committee 24) and approved in May 1997 as a contribution to global non-proliferation objectives. CAs are one of these measures, providing inspectors with additional access in a country for verification purpose.

During the exercises, the inspectors conduct a set of CAs to conclude whether they can confirm the completeness of Freedonia’s declarations, or find evidence of the Freedonian clandestine weapons program. At the beginning of the week, the IAEA inspectors visited selected research facilities at the Lab for an overview of research and activities performed in “Freedonia.”  Later in the week, the inspectors were deployed in teams to some of the facilities, where a variety of clues to the fictitious clandestine nuclear weapons activities were placed, consistent with the scenario. The exercise concluded on Friday with a review and evaluation of the conduct of the complementary accesses and the inspectors’ conclusions on what they found and what follow up actions would need to be conducted, based on their findings.

For the past eight years, Brookhaven Lab has hosted one of the annual CA training courses for the Agency’s inspectors, whose job responsibilities entail visiting the more than one hundred countries—parties to the Non-Proliferation Treaty (NPT)—who have an Additional Protocol in force, in addition to the Comprehensive Safeguards Agreement called by the NPT. The Additional Protocol provides the IAEA with more capabilities to verify the completeness and correctness of States’ (countries) declarations as to whether their nuclear programs are being conducted for peaceful purposes. 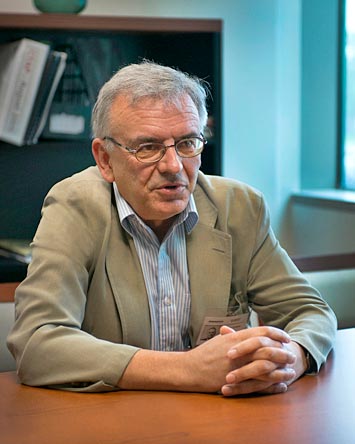 Since 2009, the chief IAEA facilitator for the course has been Safeguards Training Development Officer Kostadin Dinov, a Bulgarian nuclear engineer who studied and worked in Moscow, Tokyo, and Sweden before joining the IAEA and moving to Vienna. Before joining the training office, he spent 10 years as an IAEA inspector, mainly in the Far East, including North Korea and Japan.

Dinov explained that the Training Section for Safeguards, whose main tasks are to train the staff of the Department of Safeguards as well as staff of national States’ systems for accountancy and control of nuclear material, is one of the busiest offices in the organization.

“The mission of the Agency as a whole is to make sure that nuclear is used only for peaceful purposes,” he said. “It is very important to assure the international community that there is no misuse of nuclear energy and this assurance should be provided in the most credible way, so training our internal staff is a very important task in our house.

“Training needs for safeguards implementation are evolving because the external environment in which we have to implement safeguards is changing,” he said.  “So the task is to provide staff with competencies they need to do our job in the most efficient and effective way. It’s a major task. “

A key challenge for the Training Section for Safeguards is to maintain its training materials and training methodologies up-to-date. Many of those materials and training manuals are prepared with the support of IAEA Member States. Additionally, some training can only be run under specific conditions and in a nuclear facilities environment that does not exist at IAEA headquarters, but can be found in facilities in Member States.

“Why is this important? Because safeguards apply to every step in the nuclear fuel cycle, from mining ore to disposing of the waste,” Dinov said. “So some aspects of the nuclear fuel cycle, especially some important ones from a safeguards point of view like enrichment or reprocessing activities, need to be addressed in a very specific and thorough way.  We are very thankful to Member States for providing their facilities for training our personnel.”

The CA exercise is funded by the U.S. Government through its Support Program to IAEA Safeguards, which is coordinated by Brookhaven’s Safeguards Policy and Implementation Group. This Additional Protocol exercise is considered one of the most important for developing the ability of Agency inspectors and staff to confirm the absence of undeclared nuclear activities.

“This particular course is one of the most complex because it combines knowledge and skill of various natures to be able to understand and verify the full range of nuclear activities conducted on a site” Dinov said. “There are declared nuclear activities, but others might go undeclared so collecting, processing and verifying information require inspectors and analysts to have a comprehensive understanding of not only technical issues, but also legal rights and obligations. This training is considered not only as one of the most important, but it is also one of the highest rated when we get feedback from participants.”

The Training Section for Safeguards also conducts trainings in more than 15 other countries, including the UK, Japan, Germany, Finland, and Sweden, and at other DOE Labs, particularly Los Alamos.

“That’s also a very important place because the training on non-destructive assay measurement of nuclear material is done at Los Alamos,” Dinov said. “We are very thankful to Brookhaven and the DOE for providing us help and access to their facilities and expertise. Their resources and knowledge help our inspectors gain the most advanced skills and we are really lucky to have such great support. “