The milestone was reached "thanks to enormous efforts by everybody in the last two months,” according to Accelerator Division Director Ferdinand Willeke in the Photon Sciences Directorate.

The accelerator commissioning team achieved this significant milestone by completing several major tasks, which included installing a superconducting RF cavity in the storage ring and making it serviceable by operating a new cryogenic plant.

In addition, the team installed several other important components, including two in-vacuum undulators in the storage ring; collimators mounted on the ratchet wall; and personal protection systems at beamline front-ends, where x-rays will exit the ring and enter the beam lines. 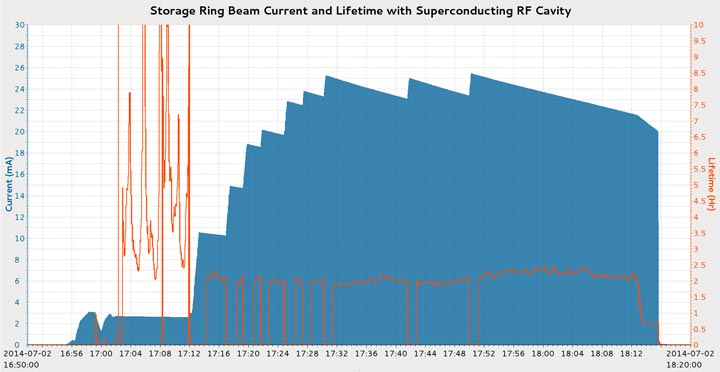 Just before 5:30 p.m. on July 2, 2014, the storage ring at the National Synchrotron Light Source II — outfitted with new a superconducting radio-frequency cavity — held 25 milliamps of current at 3GeV, a major milestone in the commissioning of the state-of-the-art facility.

Radio-frequency (RF) group leader Jim Rose added, “With the help of the riggers and the support of the vacuum and cryogenics group, we installed the cavity into the NSLS-II tunnel. Then we cooled it down to 4.5 degrees Kelvin, where it becomes superconducting. After conditioning the cavity to 1.2 megavolts, we turned it over to operations, and the accelerator physicists quickly achieved the 25-milliamp objective of this commissioning run.”

The second cavity and other hardware are still to be installed before the accelerator reaches full design current of 500 milliamps, according to deputy division director Timur Shaftan.

“The intensity will come up little by little over the next few years,” Shaftan said. The next step is commissioning of insertion devices and front-ends, he said.

When completed, NSLS-II will be a state-of-the-art, medium-energy electron storage ring that produces x-rays up to 10,000 times brighter than the original NSLS, which started operating at Brookhaven National Lab in 1982 and is shutting down at the end of September 2014.

NSLS-II construction began in 2009, with a $912-million budget from the U.S. Department of Energy Office of Science. Construction has passed through distinct phases, starting with conventional construction of the ring building and laboratory-office buildings, and later installation of the accelerator and beamlines. Back in April 2014, accelerator physicists and operators achieved 25 milliamps of current at 3 GeV in the storage ring using a non-superconducting cavity.  The final NSLS-II design calls for SRF cavities, however, and so the current milestone was key to final commissioning of the storage ring.

Progress on the facility continues, with an initial suite of beamlines for early science expected to be commissioned in the coming months.