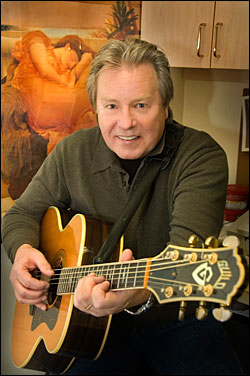 After years of stepping onto stages across the country with a band, James O'Malley now keeps his guitar in the corner of his office, facing his desk. That's the way he likes it these days - just him and his guitar, and maybe an attentive audience as well. As a solo act, O'Malley, a rigging supervisor in Brookhaven's Plant Engineering Division and a contemporary folksinger/songwriter, has produced two full-length CDs and is currently working on a third.

"Music is something I've loved all of my life," O'Malley said. "It's in my nature to write and perform, regardless of the success."

In his 20s, as part of the acoustic group "The Braid," O'Malley performed at venues ranging from Carnegie Recital Hall to college coffeehouses nationwide. The group was signed to a major recording label, but turned into a rock band that eventually dissolved. Songwriting dropped by the wayside as O'Malley's family grew, but he soon found himself easing back into the scene, starting with open mic nights and gigs at local cafés. In 2001, he released his first solo CD. Since then, O'Malley has become a regular at area folk festivals and concerts.

O'Malley's ideal audience is one that's there to see "a performer, not just the guy at the end of a bar," he said. "The accomplishment of writing a well-crafted song that other people can relate to and see themselves in is the best feeling. I play in front of people who want to hear it and respond to it."

The stories behind O'Malley's songs - some of which are humorous, others introspective - range from a tribute to the rescue workers at the World Trade Center to the adventurous tale of two boys who sneak out of the house at night. His influences include Tim Hardin, who he once jammed with as an 18-year-old, Mickey Newbury, Donovan, Joni Mitchell, Laura Nyro, Randy Newman, and The Beatles.

"I try to reach out to the listeners so they experience exactly what I'm experiencing," O'Malley said. "I don't like to end songs in a way that leaves you guessing about what I've just said."

For more information about O'Malley and his music, go to http://www.jamesomalley.com/.