This is part of a series of profiles on users at the National Synchrotron Light Source (NSLS). First operated in 1982, NSLS has accommodated more than 18,400 unique users in its lifetime as a Department of Energy user facility (see NSLS user stats). After 32 years of distinguished operations, NSLS will shut down on September 30, 2014. Replacing it is NSLS-II, which has been under construction since 2009 and is on track for early completion. When fully built out, NSLS-II will accommodate 60-70 beamlines and host over 4,000 users every year. 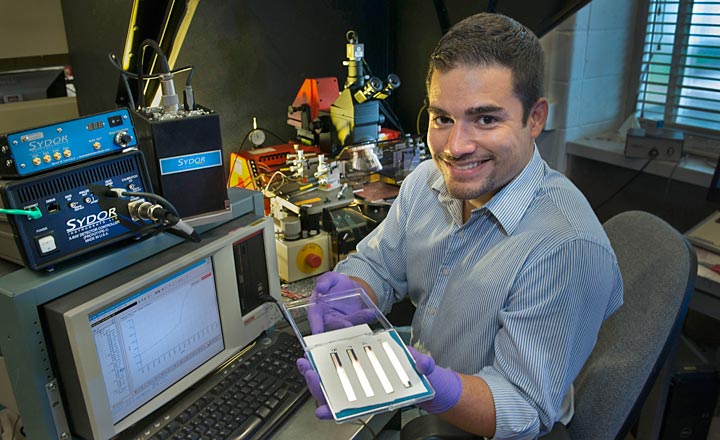 As a Technology Development Scientist with Sydor Instruments, Jaime Farrington truly enjoys his work on innovative research applications. Through this Rochester, NY-based company, Farrington works on custom diagnostics and imaging systems for a variety of applications. He works as a liaison between Sydor Instruments and scientists at various research facilities. In his roles, he wears many hats: scientist, technical consultant, customer engagement specialist, product developer, and technician, to name a few. “No two weeks are the same, and it is a constant learning experience,” he says.

How did you become part of the NSLS and NSLS-II communities?

My relationship with Brookhaven National Laboratory started right after I earned my Ph.D. in physics in 2010. I was hired by the Chemistry Department to develop an infrared beamline at the Laser-Electron Accelerator Facility (LEAF). They needed someone with a technical science background who had experience developing instrumentation. While I was there, I worked on the physical layout of the new IR beamline, component testing, and developing beamline control systems.

One day I attended a seminar at BNL at which representatives from Sydor Instruments were giving a talk. I approached the speakers afterwards, not necessarily looking for a new career, rather mostly curious to learn more about how I could translate my skillset to industry. They offered me a position a short time later, specifically to help them break into the light source market. Through this position, I was able to stay on Long Island and work with different groups at BNL, as well as other facilities.

What is your role at NSLS?

Currently, I am working with BNL scientists on the commercialization of a few technologies. Among these is an x-ray linear detector developed by Peter Siddons, the BNL Photon Sciences Detector Development group leader. Another is a diamond beam position monitor being developed by BNL physicists John Smedley, Erik Muller, and their group in the Instrumentation Division.

These innovative devices have the potential to be extremely useful to many scientists, but they need to be fine-tuned so that they are broadly applicable and commercialized. My role is to work on the technology transfer and commercialization of these technologies to make them available to a much larger group of scientists at labs around the world. This involves listening closely to the user community to understand their needs. I ask researchers how they would use the device we would be developing, in addition to finding out what features a device needs, and how we at Sydor Instruments can develop a better device in terms of quality, utility, and overall advancement in the industry.

Do you have plans to work at NSLS-II?

I will continue to be very involved in the NSLS-II project. Sydor Instruments is focused on developing devices for use at the new facility, being that it will be the most advanced synchrotron in the world when completed, and gives us the advantage of geographic proximity to our headquarters.

Many NSLS-II beamlines are in the design process, which gives us at Sydor Instruments the unique opportunity to develop tools that are truly in line with the needs of users.

In general, light sources have advanced greatly but diagnostics and detector technology hasn't quite caught up yet. This needs to change, as we need the best detectors and diagnostics to fully take advantage of a new generation of light sources such as NSLS-II. But moreover, I believe that diagnostics and detector technology development shouldn't stay within one lab. Collaboration between different facilities needs to be fostered to make these technologies widely available for all of the light source community. For example, I am working with scientists at Lawrence Berkeley National Laboratory to develop a high-resolution camera for soft x-ray research that will be useful at NSLS-II and other light sources.

Many research institutions are focused on developing new technologies, but not necessarily manufacturing them. There is a great gap between the point at which a technology is prototyped to when it is ready for commercial deployment. The federal government has created mechanisms to bridge this gap by encouraging industry to team up with research institutions. My projects are being funded by grants from the federal Small Business Innovation Research program, which encourages small businesses to link up with federally sponsored research programs, such as those at national labs, and bring these laboratory-developed technologies to market.