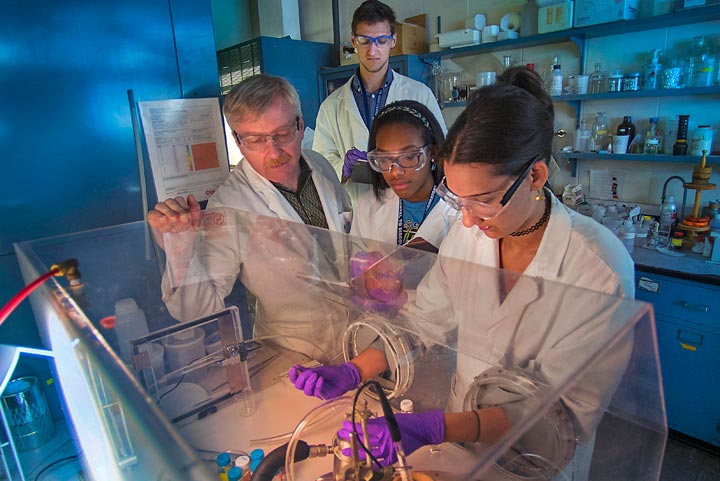 When you meet Brookhaven Lab chemist James Wishart you will likely recognize his enthusiasm for his research on ionic liquids. Add that enthusiasm to his reassuring and easy-going demeanor and you have the chemistry of a natural mentor.

Wishart is a recognized leader in the national and international arenas in the research and development of ionic liquids - salts that are in a liquid state around room temperature. Ionic liquids have many uses, including as powerful solvents and in electric battery applications. Gaining an understanding of how ionic liquids work may also lead to improved processes to separate and safely dispose of nuclear waste.

According to Noel Blackburn, manager of university programs in the Lab’s Office of Educational Programs (OEP), Wishart has been an extraordinary mentor for multiple OEP programs for many years, including the Collegiate Science Technology Entry Program, National Science Foundation, and the Summer Undergraduate Laboratory Internship (SULI).

“OEP coordinates the educational programs, but Wishart is the delivery man,” said Blackburn. “He has become the template on how we create, organize, and update our programs so students can reach their full potential.”

Wishart is quick to add that he has a colleague who plays an important role in mentoring students in his chemistry lab. That colleague is Sharon Lall-Ramnarine, an associate professor at Queensborough Community College (QCC) who has been recruiting students to come to Brookhaven since 2005. In fact, Lall-Ramnarine collaborated with Wishart when she was a graduate student before becoming a professor at QCC. As a professor, she also participated in the FaST program (Faculty and Student Teams, recently renamed the Visiting Faculty Program), which is sponsored by the U.S. Department of Energy’s Office of Workforce Development for Teachers and Scientists.

“She recruits students as freshmen, getting them into the chemistry lab early where they can engage in hands-on research,” said Wishart.  “She plays an important role in the success of the educational programs component here at the Lab, and is certainly integral to the success of her students. She is an extraordinary mentor and colleague.”

Lall-Ramnarine said it’s a two-way street. “Brookhaven offers unique opportunities to students looking for a career in science. I may recruit the students from the classroom and introduce them to research, but Brookhaven and Jim Wishart put them on the bench in a lab exposing them to cutting-edge research and providing a pathway for their success,” she said. “When I first came to Brookhaven I was in awe of the chemistry lab and the Laser-Electron Accelerator Facility. The level and type of research being conducted in these labs and the guidance I received from Jim helped to shape my thesis on the synthesis and characterization of ionic liquids and ultimately led me to a career that I love.”

"The great strides our students are making at Brookhaven Lab under the guidance of Drs. Lall-Ramnarine and Wishart demonstrate that undergraduate research, one of several high impact practices offered through the Queensborough Academies, is an integral part of the quality education we are providing for our students,” said Diane B. Call, president of Queensborough Community College.

Mentoring Students: Past and Present

Each year Wishart and Lall-Ramnarine select and mentor at least three or four new students in his lab.

One student, Damian Ewko, a recent graduate of QCC now attending Hunter College to pursue a Bachelor in Science degree in chemistry, said working at Brookhaven this summer had a huge impact on his career path.  “After spending the summer at Brookhaven I am strongly considering a career in scientific research,” said Ewko.  “Professor Lall-Ramnarine is a great motivator and being part of Dr. Wishart’s team gave me the unique opportunity to do some hands-on work in a unique lab that isn’t always available to undergraduate students.”

Ewko also said he appreciated the opportunity to speak with scientists from around the Lab while playing sports or exercising in the Lab gymnasium. “My overall experience at Brookhaven was nothing short of amazing,” he added. 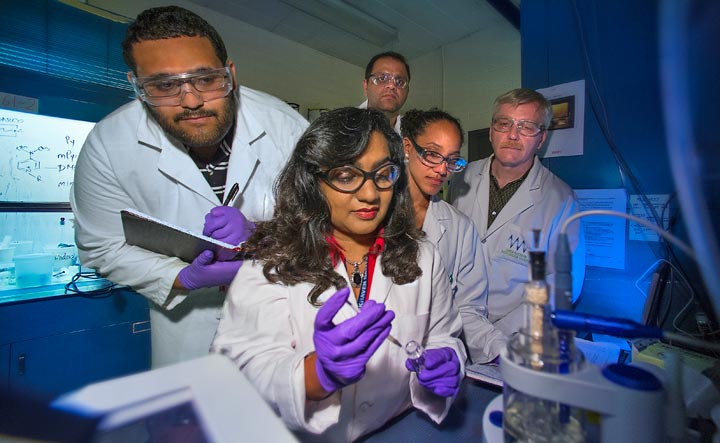 Emely Rosario, also a QCC student and a participant in the NSF program, spent a summer at the Lab.  Rosario said that the meetings held by Lall-Ramnarine were the perfect way to start the day. “The meetings were productive and I loved getting in to the chemistry lab and learning how to synthesize, purify, and convert ionic liquids,” said Rosario.  “At first I was a little nervous because Dr. Wishart is such an accomplished scientist, but my worries soon went away as he turned out to be a perfect mentor. He guided all of the interns and spent time explaining details and the importance of taking time to do things in an organized fashion to capture all of the data.  The experience I received at the Lab is something that will stay with me as I embark on my science career.”

Wishart and Lall-Ramnarine also continue mentoring students from past programs. “We try to stay in touch with our students and see where their careers take them,” said Lall-Ramnarine. “We have a long list of success stories of students who have embarked on important careers after leaving Brookhaven and QCC.”

One such success story is Jasmine Hatcher, who is currently pursuing her Ph.D. at Hunter College.

Hatcher first came to the Lab with Lall-Ramnarine in 2005 as an OEP summer student from QCC. In 2006 she returned to the Lab as a member of Lall-Ramnarine’s Faculty and Student Team, and in 2007 she came back to Brookhaven as a SULI student. After receiving her B.S. in chemistry from QCC she worked for three years as a chemistry associate in Wishart’s lab with support from the BNL Diversity Office. While at the Lab, Hatcher became proficient in preparing and characterizing new ionic liquids. Her hard work paid off in 2013 when she earned a three-year, $126,000 NSF Graduate Research Fellowship grant and the title of “CUNY All-Star.”  Although her studies keep her very busy, Hatcher still visits Brookhaven’s Chemistry Department to do thesis research under Wishart’s direction.

“Jasmine is a true success story,” said Wishart.  “She is a perfect example of how important it is to mentor and share our knowledge with our future scientists. We can guide and motivate them while demonstrating how exciting research and discovery can be. For a mentor, there is nothing better than seeing excitement in the face of a student when they first truly recognize how their research can make a difference in our world. That is the moment that all the hard work pays off.”

Wishart has been researching ionic liquids since 2001. As a radiation chemist, his initial interest was investigating what happens to them when exposed to ionizing radiation. Early in his research, it became clear that it was important to better understand the physical behavior of ionic liquids, and that it was essential to purposefully create new ionic liquids for radiation chemistry studies. Thus began his collaboration with Lall-Ramnarine, Robert Engel (Lall-Ramnarine’s Ph.D. mentor at Queens College), and the collection of a wide range of instruments in Wishart’s lab for ionic liquid synthesis and characterization, as well as several other external collaborations. Since that time, Wishart has conducted projects using ionic liquids to separate elements for recycling used nuclear fuel, studying electron transport processes in ionic liquids for solar energy conversion, and using ionic liquids to break down tough lignocellulosic materials for fermentation into biofuels. He has co-organized three major symposia on ionic liquids at American Chemical Society National Meetings and has helped organize major international meetings on ionic liquids.

Lall-Ramnarine and Wishart are also among the co-founders of the New York Regional Alliance for Ionic Liquid Studies (NYRAILS). NYRAILS is an association of ionic liquids researchers, primarily from the New York region but without strict geographic boundaries, that partner on collaborative projects and proposals. On occasion, they organize NYRAILS colloquia at their institutions to share research results and ideas. NYRAILS was formed primarily from a group of researchers Lall-Ramnarine collaborated with while working toward her Ph.D.

Alex Harris, Chair of Brookhaven’s Chemistry Department has worked with Wishart for many years. “Jim has combined scientific leadership in physical chemistry, particularly on ionic liquids, with outstanding mentoring of students,” said Harris. “He is a perfect role model on how we can inspire students to pursue careers in science.”

“We’ve come a long way, but there is still a lot of work to do to gain a better understanding of ionic liquids and how we can use them in a variety of ways that will make a difference in our world,” added Wishart.  “I strongly believe that educating our next generation of chemists is the right path to take to reach that goal.”