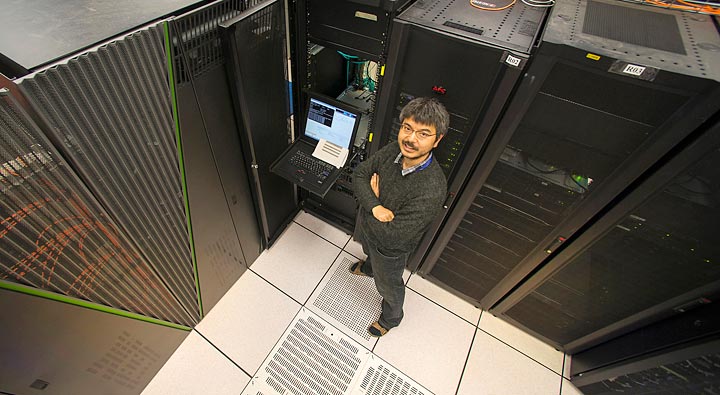 Think back to one of the most basic algebra tests you took in school and maybe you'll remember solving an equation like "X + 1 = 2." Maybe you'll also remember equations with two variables, both an X and a Y. Now imagine solving an equation with more than 100 million variables. That's what theoretical physicists at Brookhaven Lab, with collaborators around the world, do to unlock mysteries of the universe's most basic building blocks. And they use some of the most powerful computers around the world to do it—supercomputers that can do in 100 days what would take a personal computer 100 years.

Join Taku Izubuchi of the Physics Department for the 497th Brookhaven Lecture, titled "Supercomputing Fundamental Particle & Nuclear Physics," in Berkner Hall at 4 p.m. Wednesday, Sept. 24. All are invited to attend this free talk, which is open to the public. Refreshments will be offered before and after the lecture. Visitors to the Lab 16 and older must carry a photo ID while on site. Add to calendar

During his talk, Izubuchi will explain how scientists use a four-dimensional lattice and increasingly powerful supercomputers for calculations that address questions of quantum chromodynamics, the theory of "strong" interactions between subatomic quarks and gluons that form protons and neutrons of our universe. He will also discuss significant advancements—many involving Brookhaven scientists—as well as creative methods and techniques developed to manage resources, past and ongoing experiments, and future plans to test the Standard Model of particle physics that identifies all known subatomic particles and explains how they interact.

To join Izubuchi for dinner at a restaurant off site after the talk, contact Nicole Kelly (Ext. 3807).

Izubuchi received his Ph.D. in physics from the University of Tokyo in 1997. He was a postdoc at the University of Tsukuba for two years before becoming a tenured assistant professor at Kanazawa University. In 2008, he joined Brookhaven Lab with a joint position as a RIKEN/BNL Research Center (RBRC) Fellow and member of the High Energy Theory group in the Lab's Physics Department. He became a founding group leader of the RBRC's Computing Group in 2011 and is now a tenured physicist in the Lab's Physics Department. Izubuchi is highly sought for invited talks at international physics conferences and he helps train future physicists, providing guidance to postdoctoral fellows and graduate students.