This story was first released by NASA on Sept. 18, 2014. The U.S. Department of Energy’s Brookhaven National Laboratory hosts the NASA Space Radiation Laboratory, which uses Brookhaven’s particle accelerator complex to provide the ion beams that simulate the biological effects of deep space exploration.

By Andrea Dunn and Laurie Abadie 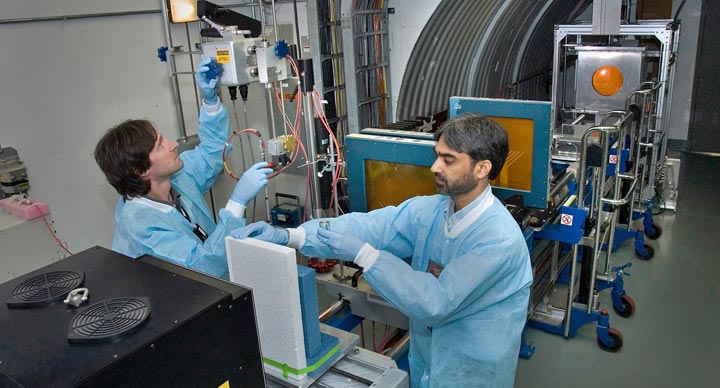 For many students, the idea of summer school is anything but inspiring. Students of the 2014 NASA Space Radiation Summer School (NSRSS) might disagree. The students, experts in their respective fields of study, were recently immersed in three weeks of intense education, collaboration and perhaps most importantly, inspiration. 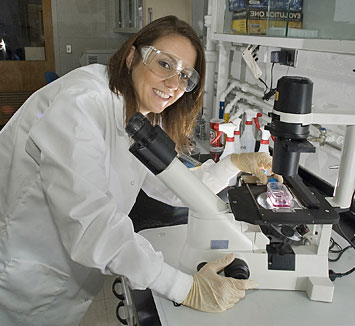 Courtney Harrison examines cells under a phase contrast microscope during her time as a student at the NSRSS.

The school, a veritable physics and biology mashup, exposes students to a broad spectrum of space radiation research and expertise. Indeed, many students see the summer school as an opportunity to better themselves as scientists and bridge biology and physics.

“These students—an outright brain trust—learn nitty-gritty space radiation physics and biology,” said John Norbury, who served as director of this year’s school. “The school sensitizes them to the various factors of space radiation, which is one of the most critical aspects of getting to Mars.”

According to Peter Guida, NASA liaison biologist at the U.S. Department of Energy’s Brookhaven National Laboratory (BNL) where the school is held, the purpose of the school is to teach the students how to think critically about global issues and problems related to radiation, how to design experiments and how to execute them.

“We want to get students on a pathway to make sure there are no gaps in space radiation science research,” said Guida.

According to Guida, the summer school provides students with an experience that they could not receive anywhere in the world. During their time at the summer school, students hear lectures from 30 to 33 distinguished experts in the field who address topics not taught in the average classroom. They also participate in cell-based experiments that teach them to detect DNA damage, detect changes in cell death and toxicity, and measure cell replication. Additionally, they learn about BNL’s particle accelerators, the radiation beam, and how to write a beam time proposal, which is key to obtaining time at BNL’s NASA Space Radiation Laboratory where researchers conduct experiments. The students—largely students with advanced degrees—are selected through a highly competitive application process.

The school offers some intangible things as well, namely collaboration and inspiration.

The NSRSS strives to get biologists and physicists on the same wavelength, all learning from one another and forging relationships with scientists in fields they normally would have not had an opportunity to meet otherwise.

“I am a biologist and I know which challenges we have, but to get a better understanding of the challenges the physicists face in this field is something that has changed and improved the way I perceive the whole field,” said Pil Fredericia, NSRSS student and doctoral student at the Technical University of Denmark.  “I think that is the most valuable lesson I have received from this whole experience.”

“The largest impact for me both personally and professionally was the relationships I formed with the other students,” says de Wet. “I now have colleagues and friends in all parts of the space radiation research field with whom I am certain I will collaborate in the future. If it had not been for this experience, I would probably never have met any of them.” 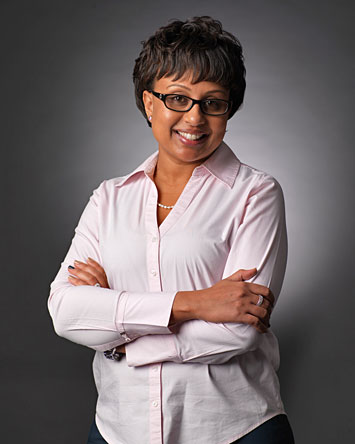 Hand in hand with the school’s objective of helping students understand why space radiation is important is the goal of inspiring them.

“We need young experts in the field with new insights,” said Norbury who adds that their measure of success is how much they have inspired students.

To date, more than 30 percent of NSRSS students have returned to BNL as researchers and, based on student feedback, this year’s school was a resounding success.

“I was really taken aback by the number of such highly acknowledged researchers in the field that took their time to come and lecture,” said Fredericia. “To be in an environment with such skilled people with so much knowledge was really inspiring to me. It made me look at my own research from another perspective. It made me think about other implications of my research.”

NASA Pathway Scholar and doctoral candidate Samrawit Yeshitla noted that the session enhanced confidence in her current work, adding, “NASA scientists gave us a lifetime of knowledge and left us to think about how we can help NASA prepare for long duration missions.”

“I do believe this program is key to one day meeting our goal of putting a person on the surface of Mars,” agreed de Wet. “It brings together researchers from all areas of the field and helps you realize that you are a part of a much larger team than your own research group—all trying to reach the same goal.”

Maybe the idea of an inspiring summer school isn’t such a radical idea after all.