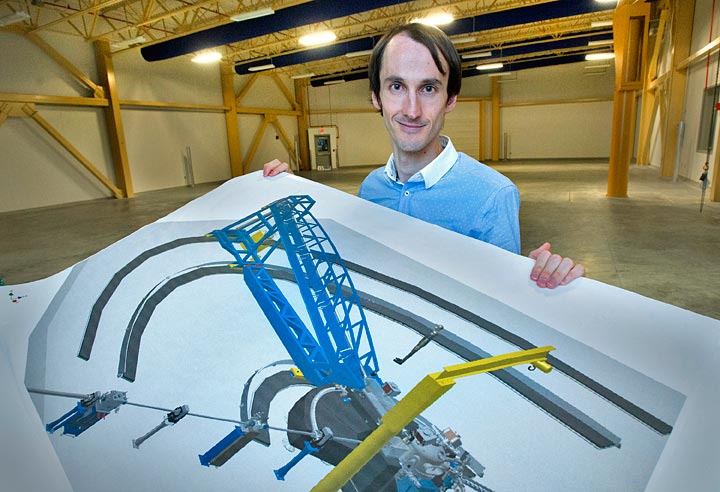 Ignace Jarrige of Brookhaven Lab's Photon Sciences Directorate in the vacant hall where the spectrometer for the extra-long Soft Inelastic X-ray Scattering (SIX) beamline will be built at the National Synchrotron Light Source II.

Trains that travel 60 miles to New York City in 10 minutes? Computer processors 600 times more powerful than those in the iPhone 6? A nationwide electrical grid that helps save billions of dollars and natural resources each year with superconducting wires that transmit electricity with absolutely zero electrical resistance?

Today these applications seem like a tall order of science fiction, but they could become more like realistic possibilities, thanks to new tools being developed to explore atomic inner-workings at the National Synchrotron Light Source II (NSLS-II) at the U.S. Department of Energy's Brookhaven Lab.

Join Ignace Jarrige of the Photon Sciences Directorate for the 501st Brookhaven Lecture, titled "Negative Particles for Positive Breakthroughs: Characterizing Electrons in Novel Materials at NSLS-II" in Berkner Hall at 4 p.m. Wednesday, Jan. 21. All are invited to attend this free talk, which is open to the public. Refreshments will be offered before and after the lecture. Visitors to the Lab 16 and older must carry a photo ID while on site. Add to calendar

During his talk, Jarrige will discuss different ways electrons behave and affect unique materials' properties. He will then explain how the new Soft Inelastic X-ray Scattering (SIX) beamline—an extra-long beamline he is developing at NSLS-II—will measure how x-rays excite atomic bonds in new materials researchers are inventing around the world. Jarrige and his collaborators will use this new tool to unravel mysteries of electrons' collective behavior with unprecedented accuracy as they witness emerging phenomena such as superconductivity—the ability to conduct electricity with zero resistance—magnetism, and other phenomena that could lead to those faster trains, more powerful computer processors, and far more efficient electrical grids.

To join Jarrige for dinner at a restaurant off site after the talk, contact Eileen Morello (Ext. 2145).

Jarrige received "highest honors and congratulations of the jury" when he earned a Ph.D. in physical chemistry at University Pierre and Marie Curie in Paris, France, in 2003. As a postdoc, he established a research program and operated a beamline at the SPring-8 light source in Japan from 2004 to 2006, and he was a research scientist for the Japan Atomic Energy Agency at the SPring-8 facility from 2007 until 2012. The American Chemical Society's ACS Catalysis journal recently published his work done at SPring-8 on how certain materials interact in catalytic converters used in some cars and trucks today. Jarrige arrived at Brookhaven Lab in 2012 and is group leader for developing the SIX beamline at NSLS-II. He is also developing a research program at the Advanced Light Source at Lawrence Berkeley National Laboratory. His research has been published in a number of scientific journals, including Proceedings of the National Academy of Sciences, Physical Review Letters, and Applied Physics Letters.