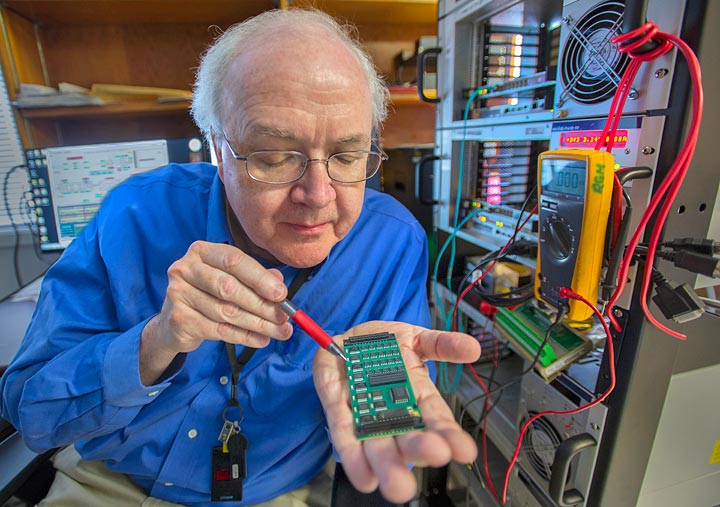 Robert Malone examines a newly developed diagnostic board that will be used as part of the control system upgrade at Brookhaven's Accelerator Test Facility.

The Brookhaven Accelerator Test Facility (ATF) pioneered the concept of a facility for studying complex properties of modern particle accelerators and new methods of accelerating electrons and ions, and it has successfully served this mission for more than two decades. Recognizing its importance, the U.S. Department of Energy (DOE) recently named the ATF an Office of Science National User Facility, paving the way for scientists from around the world to access this test bed facility with a focus on improving accelerator science.

The ATF relies on an intricate computer control system to manage the operations of its beamline components, scientific instrumentation, and experimental apparatus.

Malone, a senior technology architect who has worked at the Lab for more than 38 years (25 of those years at the ATF) has been a key member of the team building state-of-the art computing systems and diagnostics that run the ATF. This may sound simple, but it’s not. Constructing a web of intricate systems that can all “talk” together in sequence is a challenging task.

“Building systems from the ground up is time consuming, but is made easier through the use of unified software,” said Malone.  “At the ATF, the software tool package we typically use is Vsystem. Originally developed at Los Alamos National Laboratory and made available through a DOE technology transfer agreement, I used Vsystem to design and implement databases, operator displays, supporting application programs, and data management tools.

Malone has led two major control system upgrades at the ATF and has worked to continually improve and refine the control system over the years. He is also recognized for organizing the first Vsystem users’ group meeting in 1993 that brought together 35 users from seven countries. This network of users still exists and remains an active forum for informational exchange.

This important computing and software knowledge isn’t only shared within the DOE Laboratory system. For example, recently staff at the U.S. Air Force's Compressor Research Facility (CRF) embarked on a plan to update their computer control system.  The CRF is a division of the U.S. Air Force Research Laboratory at Wright-Patterson Air Force Base in Ohio and performs research studying the aerodynamic and aeromechanical performance of advanced compressors and fans used for both civil and military platforms.  A key component to their upgrade included plans to migrate to Vsystem.

“Through an internet support forum, CRF reached out to the Vsystem user community, asking if anyone could help in their effort,” said Malone.  “They were looking for C++ software needed to drive older CAMAC data acquisition hardware modules. I know that software well as I had written a number of software libraries for use at the ATF which I thought would prove useful to the U.S. Air Force. I sent them the info the very next day.”

Malone adds that this is a fairly routine occurrence – one scientific facility reaching out to others to inquire and share knowledge that positively impacts research in related fields.

“Needless to say, I was pleasantly surprised and very appreciative when the chief of the experimental branch of the turbine engine division of the U. S. Air Force expressed appreciation for my assistance by sending a letter to my supervisor Igor Pogorelsky and Collider-Accelerator Department Chair Thomas Roser stating that my contribution ‘would save at least six months of their schedule and prevented significant duplication of effort among government agencies and [Malone] is to be commended for his stewardship of taxpayer resources.’"

Future of the ATF

Plans are underway to expand the ATF (ATF-II), which will need a new control system. Original ATF components and engineering design principles coupled with new VME64x-based hardware will provide ATF-II with a state-of-the-art computing system. This new system will enhance control and monitoring, improve experimenter throughput, and provide a solid platform for new control system features supporting ATF-II's expanding role in support of its accelerator stewardship mission. Malone says he and his colleagues are prepared and ready to deliver.

“Come check out the rack of components in my office,” said Malone enthusiastically.  “We’re already refining the tools we need to keep Brookhaven’s ATF in the forefront as a top-notch international facility that helps to expand the science that is so important to our world.”

Malone added that when he isn’t busy developing, building, and implementing software for the ATF he spends his time as a HAM radio operator. “Even when I’m not at work, I really enjoy all types of technology,” he said.