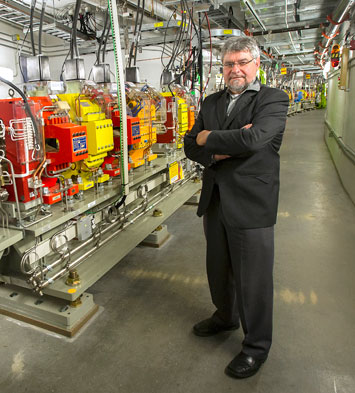 Ferdinand Willeke standing along a portion of the internal accelerator system for the National Synchrotron Light Source II. Willeke will discuss this system during the 506th Brookhaven Lecture at 4 p.m. on Wednesday, June 24, in Berkner Hall.

The National Synchrotron Light Source II (NSLS-II) at Brookhaven Lab is the brightest, most advanced light source of its kind. With the facility dedicated just four months ago, scientists have only begun using NSLS-II's vast amounts of light particles, called photons, for a portfolio of research that will include probing the structure and function of specialized materials for energy applications, geological samples for environmental studies, and biological proteins for applications in medicine.

Designing, building, and commissioning a facility half a mile around is a tremendous feat, but with nearly a billion dollars, committed teams, and in less than 10 years, the NSLS-II project was completed within budget, with increased scope, and significantly ahead of schedule. During the next Brookhaven Lecture, Ferdinand Willeke—who was responsible for NSLS-II's accelerator system—will talk about how he and the many members of his team completed the complex storage-ring-based accelerator system that is now producing ultra-bright, ultra-intense light for researchers at NSLS-II.

Join Willeke for the 506th Brookhaven Lecture, titled "NSLS-II: The New Synchrotron Light Source at Brookhaven Lab," in Berkner Hall at 4 p.m. on Wednesday, June 24. All are invited to attend this free talk, which is open to the public. Refreshments will be offered before and after the lecture. Visitors to the Lab 16 and older must carry a photo ID while on site. Add to calendar

During his talk, Willeke will provide an overview of NSLS-II and its accelerator complex. He will then discuss highlights from the development and commissioning processes, the machine's current status, and an outlook for the future.

To join Willeke for dinner at a restaurant off site after the talk—date to be determined— contact Barbara Moebes (Ext. 7159).

Willeke, who has been the division director for accelerators for NSLS-II since joining Brookhaven Lab in 2007, earned a Ph.D. in condensed matter physics from the University of Berlin in 1980. He was a staff accelerator scientist at Deutsches Elektronen-Synchrotron (DESY)—a national research center in Germany—for 27 years, from 1980 until the year he joined Brookhaven. He was a member of the commissioning team for the Tevatron particle collider at Fermilab from 1983 to 1985, and at DESY, he was responsible for commissioning the proton ring for the HERA collider from 1991 to 1994, and overseeing operations and development for HERA from 1994 to 2007. He was a member of the machine advisory committee for the Relativistic Heavy Ion Collider at Brookhaven from 1992 to 1999 and chair of the Lab's Collider-Accelerator Department machine advisory committee from 2004 to 2006.