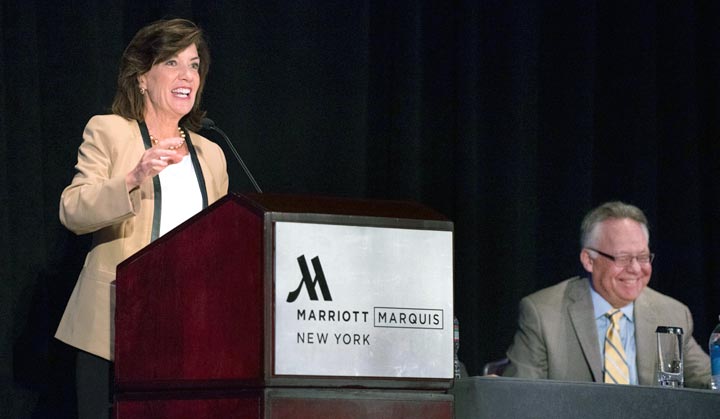 Lieutenant Governor of New York Kathy Hochul addresses scientists from around the world at the 2015 Synchrotron Radiation Instrumentation conference in New York City.

In July, at the heart of New York City, hundreds of scientists gathered together for the 12th International Conference on Synchrotron Radiation Instrumentation (SRI). Hosted by the National Synchrotron Light Source II (NSLS-II), an Office of Science User Facility at the U.S. Department of Energy’s Brookhaven National Laboratory, SRI 2015 brought together synchrotron scientists and engineers at the forefront of their fields from around the world to highlight the most exciting science and technology in the field of synchrotron science.

The theme for the triennial conference was “Capturing the Light of Science & Innovation,” and the conference included 14 keynote and plenary talks, 175 oral presentations and 438 poster presentations.

The conference began with a full day tour of NSLS-II. Hundreds of attendees boarded buses for the trip to Brookhaven National Laboratory where they were treated to a tour of the newly constructed facility.

Doon Gibbs kicked off the morning’s talks with thoughts on the importance of international collaboration and meetings like this one by recalling the first SRI conference he attended nearly 30 years ago.

“It had a big impact on me,” he said. “It was there I first heard a phrase I’ve never forgotten: Synchrotron Fever. It was a reference to how synchrotron science was growing at that time, and it has continued to grow since then.”

Gibbs mentioned the incredibly productive and advanced synchrotron light sources that have been built around the globe over the past 20 years – the Advanced Photon Source in Chicago at Argonne National Laboratory, the European Synchrotron Radiation Facility in Grenoble, France, and SPring-8 in Japan. Joining their ranks is the newly built National Synchrotron Light Source II at Brookhaven National Laboratory, which will bring to this remarkable field with 60 new beamlines to be constructed over the next 10 years, Gibbs said.

With seven operating beamlines, NSLS-II is already open for scientific research, but the coming years promise excitement with build-out of the rest of the facility. That work will happen with many partners, including the State of New York, which has committed $25 million in funding for the High Energy X-ray Diffraction beamline.

New York State Lieutenant Governor Kathy Hochul, a committed leader in the advancement of science, STEM education, and expanded diversity in science, then addressed the crowd.

“Some have said that politics is the art of the possible; we’re supposed to find solutions and figure out what’s possible,” she said to the gathering of scientists. “You all work in the art of the impossible. You are the visionaries who see things we cannot, and you don’t see them as impossibilities. You use your skills to make new things happen that advanced society and humankind.”

She pointed to the audience and talked of their dedication, the years of patient and painstaking research, all in service of the advancement of knowledge and the betterment of society.

Following Hochul’s speech, NSLS-II Director John Hill gave an update on the facility. With pride in his voice, he talked of the incredible work by Brookhaven’s staff to get the new light source built and working so well right out of the gate. “Early data from our beamlines is looking really nice. We’re beginning to take advantage of our high brightness and high coherence, and we continue to hit milestones.”

Included in those milestones is the first scientific paper published based on data from NSLS-II, submitted just two months after achieving “first light” in October 2014.

The rest of the conference followed with high attendance at both the plenary and oral sessions, and a banquet dinner with speaker Joel Hurowitz of Stony Brook University, who gave a talk titled, “NASA’s Mars 2020 Rover Mission: the PIXL in-situ X-ray Investigation and Opportunities for the Analysis of Returned Martian Samples.”

The next Synchrotron Radiation Instrumentation conference will be hosted by the Taiwan Photon Source in Taipei, in May of 2018.