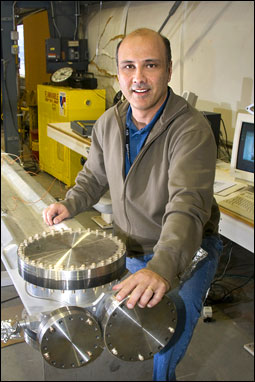 "Oxygen for this new project is the same as when I started in Brazil," he said, talking about being part of something important. Eighteen years ago, Ferreira joined the team that designed and built the Laboratorió Nacional de Luz Síncrotron located in Campinas, Brazil. Until recently, this facility was the only light source in the Southern Hemisphere. A physicist, Ferreira headed the vacuum group for 12 years after the machine went online.

Looking for fresh air, he started at Brookhaven on December 17, 2007, to work on the vacuum system for NSLS-II. "About 25 percent of the cost is in the vacuum system," he pointed out. "It's the most expensive single item in the storage-ring project."

Ferreira already feels part of the Brookhaven community. Even before he took the job here, he jumped into the 60th anniversary photo, shot in May last year. "Here for three days on an interview, I was in the Cavendish dorm for lunch when I saw everyone gathering on the lawn. I just walked across the street and joined some of the people on the project. It was fun!"

One big change for Ferreira is the winter cold. A recent cold spell, embellished with lots of the white stuff, drew the Ferreira family out of their on-site apartment to build a snowman. "I lost my summer in Brazil," said Ferreira, referring to opposite seasons below the Equator. But he's looking forward to summer on Long Island, with visits to the East End wineries and, hopefully, sailing.

In the meantime, his five-year-old son is enrolled in kindergarten in the Longwood School District and his three-year-old daughter is adjusting nicely. His wife, who just finished a two-year post doc in chemical engineering, is starting to look for another appointment.

"This new environment is important for all of us," he said. "The children will learn another language. All of us will explore another culture. It's good to have fresh ideas. New oxygen!"